House of Commons of England

The Parliament of England developed from the Magnum Concilium that advised the English monarch in medieval times. This royal council, meeting for short periods, included ecclesiastics, noblemen, as well as representatives of the counties (known as "knights of the shire"). The chief duty of the council was to approve taxes proposed by the Crown. In many cases, however, the council demanded the redress of the people's grievances before proceeding to vote on taxation. Thus, it developed legislative powers.[1]

The first parliament to invite representatives of the major towns was Montfort's Parliament in 1265. At the "Model Parliament" of 1295, representatives of the boroughs (including towns and cities) were admitted. Thus, it became settled practice that each county send two knights of the shire, and that each borough send two burgesses. At first, the burgesses were almost entirely powerless; while the right to representation of each English county quickly became indisputable, the monarch could enfranchise or disfranchise boroughs at pleasure. Any show of independence by burgesses would thus be likely to lead to the exclusion of their towns from Parliament. The knights of the shire were in a better position, although less powerful than their noble and clerical counterparts in what was still a unicameral Parliament.

The division of the Parliament of England into two houses occurred during the reign of Edward III: in 1341 the Commons met separately from the nobility and clergy for the first time, creating in effect an Upper Chamber and a Lower Chamber, with the knights and burgesses sitting in the latter. They formed what became known as the House of Commons, while the clergy and nobility became the House of Lords. Although they remained subordinate to both the Crown and the Lords, the Commons did act with increasing boldness. During the Good Parliament of 1376, the Commons appointed Sir Peter de la Mare to convey to the Lords their complaints of heavy taxes, demands for an accounting of the royal expenditures, and criticism of the King's management of the military.[2] The Commons even proceeded to impeach some of the King's ministers. Although Mare was imprisoned for his actions, the benefits of having a single voice to represent the Commons were recognized, and the office which became known as Speaker of the House of Commons was thus created.[2][3] Mare was soon released after the death of King Edward III and in 1377 became the second Speaker of the Commons.

During the reign of the next monarch, Richard II, the Commons once again began to impeach errant ministers of the Crown. They began to insist that they could control both taxation and public expenditures. Despite such gains in authority, however, the Commons still remained much less powerful than the Lords and the Crown. 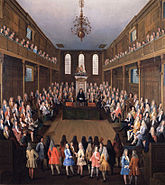 Interior of the House of Commons In Session by Peter Tillemans, c. 1710

The influence of the Crown was increased by the civil wars of the late fifteenth century, which destroyed the power of the great noblemen. Both houses of Parliament held little power during the ensuing years, and the absolute supremacy of the Sovereign was restored. The domination of the monarch grew further under the House of Tudor in the sixteenth century. This trend, however, was somewhat reversed when the House of Stuart came to the English throne in 1603. The first two Stuart monarchs, James I and Charles I, provoked conflicts with the Commons over issues such as taxation, religion, and royal powers.

The differences between Charles I and Parliament were great, and resulted in the English Civil War, in which the armed forces of Parliament were victorious. In December 1648 the House of Commons was purged by the New Model Army, which was supposed to be subservient to Parliament. Pride's Purge was the only military coup in English history. Subsequently, King Charles I was beheaded and the Upper House was abolished. The unicameral Parliament that remained was later referred to by critics as the Rump Parliament, as it consisted only of a small selection of Members of Parliament approved by the army - some of whom were soldiers themselves. In 1653, when leading figures in this Parliament began to disagree with the army, it was dissolved by Oliver Cromwell. However, the monarchy and the House of Lords were both restored with the Commons in 1660. The influence of the Crown had been decreased, and was further diminished after James II was deposed in the Glorious Revolution of 1688 and the Bill of Rights 1689 was enacted.