House of Commons of Great Britain 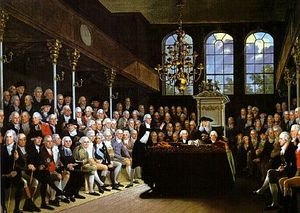 Pitt addressing the House in 1793

In the course of the 18th century, the office of Prime Minister developed. The notion that a government remains in power only as long as it retains the support of Parliament also evolved, leading to the first ever motion of no confidence, when Lord North's government failed to end the American Revolution. The modern notion that only the support of the House of Commons is necessary for a government to survive, however, was of later development. Similarly, the custom that the Prime Minister is always a Member of the Lower House, rather than the Upper one, did not evolve until the twentieth century.

The business of the house was controlled by an elected Speaker. The Speaker's official role was to moderate debate, make rulings on procedure, announce the results of votes, and the like. The Speaker decided who may speak and had the powers to discipline members who break the procedures of the house. The Speaker often also represented the body in person, as the voice of the body in ceremonial and some other situations. The title was first recorded in 1377 to describe the role of Thomas de Hungerford in the Parliament of England. By convention, Speakers are normally addressed in Parliament as Mister Speaker, if a man, or Madam Speaker, if a woman.

The constituencies which elected members in England and Wales remained unchanged throughout the existence of the Parliament of Great Britain.[1]

Table of Constituencies and Members of the Parliament