The House of Este ([ˈɛste] Italian: Casa d'Este, originally House of Welf-Este) is a European princely dynasty. It is one of the most ancient noble dynasties in Europe.

The elder branch of the House of Este included the dukes of Brunswick and Lüneburg (1208–1918) and produced Britain's Hanoverian monarchs and one Emperor of Russia (Ivan VI).

Edward Gibbon said the family originated from the Roman Attii family, which migrated from Rome to Este[2] to defend Italy against the Ostrogoths. However, there is little evidence to support this hypothesis. The names of the early members of the family indicate that a Frankish origin is much more likely. The first known member of the house was Margrave Adalbert of Mainz, known only as father of Oberto I, Count palatine of Italy, who died around 975. Oberto's grandson, Albert Azzo II, Margrave of Milan (996–1097) built a castle at Este, near Padua, and named himself after it. He had three sons from two marriages, two of whom became the ancestors of the two branches of the family:

The two surviving branches, with Duke Henry the Lion of Saxony and Bavaria on the German side, concluded an agreement in 1154 which allocated the family's Italian possessions to the younger line, the Fulc-Este, who in the course of time acquired Ferrara, Modena and Reggio. Este itself was taken over in 1275 by Padua and in 1405, (together with Padua) by Venice. 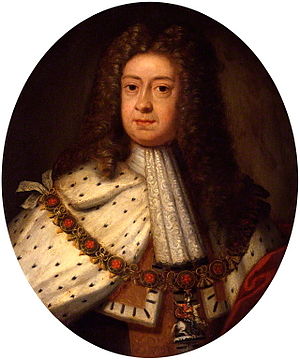 George, by the Grace of God, of Great Britain, France and Ireland, King, Defender of the Faith, Prince-Elector of Hanover, Duke of Brunswick. Portrait c. 1714, the year of his succession, by Sir Godfrey Kneller.

After the peace ending the Napoleonic wars reshaped Europe ushering in the Modern era, the Electorate of Hanover (duchy of Brunswick and Lüneburg held in personal union by the king of Great Britain, George III) was dissolved by treaty, its lands were enlarged, and the state promoted to a kingdom. The new kingdom existed from 1815 to 1866, but upon accession of Queen Victoria (who could not inherit Hanover under the Salic law) in 1837, it passed to her uncle and thus ceased to be in personal union with the British Crown.

The House of Este hence gave Great Britain and the United Kingdom the "Hanoverian monarchs" (1714–1901).

Younger branch, the Margraves of Este 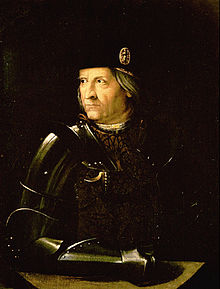 Ercole I d'Este was one of the most important patrons of arts in the Italian Renaissance.

All later generations of the Italian branch are descendants of Fulco d'Este. From 1171 on, his descendants were titled Margraves of Este.

Obizzo I (d. 1193), the first margrave, battled against Emperor Frederick I Barbarossa. His nephew Azzo d'Este VI (1170–1212) became podestà of Mantua and Verona. In 1146, with the last of the Adelardi, Ferrara passed as the dowry of his niece the Marchesella, to Azzo VI d'Este. Azzo VII Novello was nominated podestà for his lifetime in 1242.

The lordship of Ferrara was made hereditary by Obizzo II (d. 1293) who was proclaimed Lord of Ferrara in 1264, Lord of Modena 1288 and Lord of Reggio 1289. Ferrara was a papal fief and the Este family were given the position of hereditary papal vicars in 1332.

Ferrara became a significant center of culture under Niccolò d'Este III (1384–1441), who received several popes with great magnificence, especially Eugene IV.He held a Council here in 1438, later known as the Council of Florence. 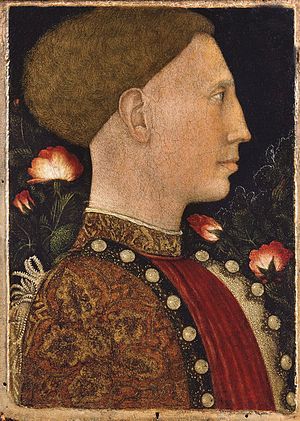 His successors were Leonello (1407–1450) and Borso (1413–1471), who was elevated to Duke of Modena and Reggio by Emperor Frederick III in 1452. In return, he received these duchies as imperial fiefs. In 1471, he received the duchy of Ferrara as papal fief from Pope Paul II, for which occasion splendid frescoes were executed at Palazzo Schifanoia.

Under Ercole (1431–1505), one of the most significant patrons of the arts in late 15th and early 16th century Italy, Ferrara grew into a cultural center, renowned especially for music; Josquin des Prez worked for Duke Ercole, Jacob Obrecht came to Ferrara twice, and Antoine Brumel served as principal musician from 1505. Ercole's daughter Beatrice (1475–1497) married Ludovico Sforza, Duke of Milan, while his daughter Isabella (1474–1539) married Francesco Gonzaga, Marquess of Mantua.

Ercole I's successor was his son Alfonso I (1476–1534), third husband of Lucrezia Borgia, daughter of Pope Alexander VI, sister to Cesare Borgia and the patron of Ariosto. 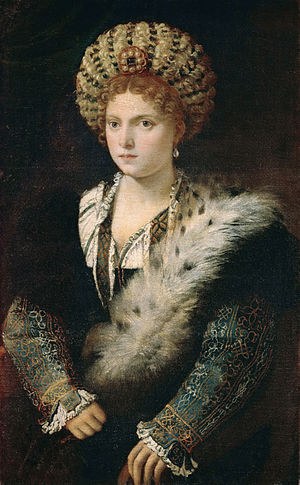 Alfonso and Lucrezia Borgia's son Ercole d'Este II (1508–1559) married Renée of France, daughter of Louis XII of France. His son Alfonso II first married Lucrezia, daughter of grand-duke Cosimo I of Tuscany. Later, after becoming a widower, he married Barbara, the sister of Maximilian II, Holy Roman Emperor (1527–1576). His third wife, Margherita Gonzaga, was daughter of the duke of Mantua.

Though he raised the glory of Ferrara to its highest point, and was the patron of Torquato Tasso and Giovanni Battista Guarini, favoring the arts and sciences, as the princes of his house had always done, the legitimate line ended in 1597 with him. Emperor Rudolph II recognized as heir, his first cousin Cesare d'Este (1533–1628), member of a cadet branch born out of wedlock, who continued to rule in the imperial duchies and carried on the family name. Ferrara, on the other hand, was annexed by force of arms in 1598 by Pope Clement VIII, on grounds of the heir's illegitimacy, and incorporated into the Papal States.

The last duke, Ercole III, was deposed in 1796 by the French. His two duchies became the Cispadane Republic which one year later was merged into the Cisalpine Republic and then into the Napoleonic Kingdom of Italy. Ercole was compensated in 1801 with the small principality of Breisgau in southwestern Germany, whose previous rulers, the Habsburgs, ceded it to him in anticipation of its eventual return to the Habsburgs, since Ercole's daughter Maria Beatrice Ricciarda d'Este was married to a cadet Habsburg, Archduke Ferdinand of Austria-Este. Ercole died in 1803 and Breisgau passed to his daughter and her husband, who then (1806) lost it during the Napoleonic reorganization of the western territories of the defunct Holy Roman Empire to the enlarged and elevated Grand Duchy of Baden.

Austria-Este and the House of Habsburg

In 1814, when French rule in Italy ended (but after the death of Duke Ercole), Modena was returned to his daughter Mary Beatrice and her son, Archduke Francis of Austria-Este. The family thus ruled the duchy of Modena and Reggio again from 1814 to 1859, using the names Asburgo-Este (Habsburg-Este) and Austria-Este. In 1859, the duchy lost its independence to the new united Italy, and Francis V, Duke of Modena, was deposed.

File:ErcoleIIId'Este.jpg
Ercole III was the last Este duke of Modena and Reggio.

The family of Austria-Este became extinct in the male line with the death of Francis V in 1875. His blood-heiress was his niece, Archduchess Maria Theresia of Austria-Este (d. 1919); she and her husband, Prince Louis of Bavaria, later became Queen and King of Bavaria. The present head of this branch of the family is Franz, Duke of Bavaria.

However, Francis V had decided to retain the Este name in the Habsburg family and willed his inheritance to the line of Archduke Charles Louis, younger brother of Emperor Francis Joseph, on condition that the heir use the name Austria-Este. The first "adoptee" was Archduke Franz Ferdinand of Austria (b. 1863, not descended from Maria Beatrice Ricciarda d'Este), who took the name Austria-Este and in 1896 became the heir presumptive of the Habsburg Empire, but was murdered on 28 June 1914 in Sarajevo.

Arms of the Dukes of Austria-Este as borne by Archduke Franz Ferdinand during his lifetime.

Since his own children were born in morganatic marriage (Sophie, Duchess of Hohenberg), the Habsburgs designated his soon-to-be born great-nephew Robert (b. 8 February 1915), second son of the future emperor Charles, as the next "adopted Austria-Este." Through his mother Zita of Bourbon-Parma (a great-granddaughter of Maria Teresa of Savoy, Duchess of Lucca and Parma, who was a daughter of Maria Teresa of Austria-Este, Queen of Sardinia, who in turn was a daughter of Maria Beatrice Ricciarda d'Este and Archduke Ferdinand of Austria-Este, Duchess and Duke of Breisgau and Modena), Robert was a descendant of Ercole III d'Este, and the blood of last Este dukes thus joined again with the name Austria-Este.

Today, the bearer of this tradition is the eldest son of Archduke Robert of Austria-Este (1915–1996), Lorenz Otto Charles of Austria-Este (b. 1955), who is married to Princess Astrid of Belgium, the only daughter of King Albert II. In 1995, Lorenz received the additional title of Prince of Belgium.

Since 1991 the couple's children are titled :

The eldest of their children is Prince Amedeo of Belgium, Archduke of Austria-Este (b. 1986).