From Infogalactic: the planetary knowledge core
(Redirected from House of Hauteville)
Jump to: navigation, search 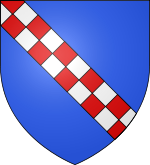 Coat of Arms of the Hauteville family[year needed]

The House of Hauteville (French: Maison de Hauteville, Italian: Casa d'Altavilla, Sicilian: Casa d'Autavilla) was a petty baronial Norman family from the Cotentin which rose to prominence in Europe, Asia, and Africa through its conquests in the Mediterranean, especially southern Italy and Sicily. They also participated in the Norman conquest of England. 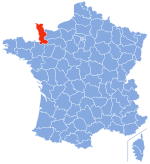 Department of Manche, location of Hauteville-la-Guichard

The familial origins had roots from the Norsemen who had settled in Normandy in the 10th century. They are said to be descended from Hiallt, a Norseman who settled in the Cotentin Peninsula and founded the village of Hialtus Villa (Hauteville) from which the family takes its name.[1][2] From just which village of Hauteville, which may simply mean "high town", the family drew its name is hard to identify with certainty, though modern scholarship favours Hauteville-la-Guichard.

The first of the family well known to us is Tancred of Hauteville, the founder of the eponymous villa. He remained until his death (c. 1041) a minor baron of Normandy, but he had twelve sons and at least two daughters by two wives, Muriel and Fressenda. His small patrimony was hardly enough to satisfy his sons' desire for land and glory and so eight of the twelve went south to the Mezzogiorno to seek their fortunes there.

According to Goffredo Malaterra's chronicle the fourth son by Tancred's second wife, Fressenda,or Freisen, descendent from Frei, Avril or Aubrey, was one Aubrey or Alverardus who remained behind in Normandy. About the time of the Domesday Book in 1086 a Alverardus or Aluericus Hautville (Halsvilla, Altavilla or Hauteville) is mentioned as having previously held lands in Compton Martin, Somerset, England. His kinsman Ralf de Hauville (also Halsvilla) is mentioned in the Domesday Book of 1086 as a tenant-in-chief in Burbage and Wolfhall in Wiltshire. Alverardus most probably founded the Somerset Hautevilles and Ralf most probably founded the Wiltshire/Berkshire Hauvilles.

The eldest of the twelve sons, William and Drogo, were the first to arrive in the south sometime around 1035. They so distinguished themselves against the Greeks that William was inaugurated as count of Apulia and Calabria and lord of Ascoli, Drogo as lord of Venosa. In 1047, Drogo was confirmed by the Emperor Henry III as William's heir and a direct vassal of the imperial crown. Their next brother, Humphrey, succeeded Drogo and defeated Pope Leo IX at the Battle of Civitate, making the Hauteville power the highest in the region. He was in turn succeeded by a fourth brother, the first by Tancred's second wife, Robert Guiscard.

It was Robert who began the conquest of Sicily which was to yield a kingdom seventy years later, as he renewed the war against Byzantium with vigour. Along with the valiant warriorship displayed by his youngest brother, Roger Bosso, the two began to amass notoriety around the Mediterranean.[3] According to William of Apulia's The Deeds of Robert Guiscard, although his Norse roots would seem to suggest otherwise, until the invasion of Sicily, Guiscard had not participated in naval warfare.[4] It was during this conquest that Guiscard and his amphibious command pioneered the ability to transport over 200 troops in a mere 13 vessels, an advantage that would have an influence in the Norman invasion of England.[5] In 1059 he was created duke by the pope and invested with as yet unconquered Sicily, which he gave, in 1071, to his brother Roger with the title of count. The Guiscard's heirs, Bohemond and Roger Borsa, fought over the inheritance and Roger of Sicily began to outshine the Apulian branch of the family. Roger united the Greek, Lombard, Norman, and Saracen elements of Sicily under one rule and refused to allow religious differences to spoil his conquests.

Roger bequeathed a powerful state to his young sons, Simon and Roger. It was this Roger who, upon inheriting all from Simon in 1105, began the quest to unite into one all the Hauteville domains: Apulia and Calabria (then under Borsa's son William II) and Taranto (which had been given to Bohemond as a consolation for being deprived of Apulia) with his own Sicily.

On William's death in 1127, the union of the duchy and the county was effected and Roger's quest for a crown began. Believing kings to have ruled Palermo in antiquity, Roger threw his support behind the Antipope Anacletus II and was duly enthroned as king of Sicily on Christmas Day 1130.

Roger spent most of the decade beginning with his coronation and ending with his great Assizes of Ariano fending off one invader or other and quelling rebellions by his premier vassals: Grimoald of Bari, Robert of Capua, Ranulf of Alife, Sergius of Naples, etc. In 1139, by the Treaty of Mignano, Roger received the recognition of his kingship from the legitimate pope. It was through his admiral George of Antioch that Roger then proceeded to conquer the Mahdia in Africa, taking the unofficial title "king of Africa."

Roger's son and successor was William the Bad, though his nickname derives primarily from his lack of popularity with the chroniclers, who supported the baronial revolts William crushed. His reign ended in peace (1166), but his son, William the Good, was a minor. During the boy regency until 1172, the kingdom saw turmoil which almost brought the ruling family down, but eventually the realm settled down and the reign of the second William is remembered as two decades of almost continual peace and prosperity. For this more than anything, he is nicknamed "the Good." His death without heirs in 1189 threw the realm into chaos, however.

Tancred of Lecce seized the throne but had to contend with the revolt of his distant cousin Roger of Andria and the invasion of Henry VI of Germany on behalf of his wife, Constance, the daughter of Roger II. Constance and Henry eventually prevailed and the kingdom fell in 1194 to the Hohenstaufen. Through Constance, however, the Hauteville blood was passed to the great Frederick II, Holy Roman Emperor.

The aforementioned Bohemond received in 1088, as a consolation, the principality of Taranto district from the duchy of Apulia which fell as per their father's will to his brother Roger Borsa. Bohemond did not long remain to enjoy his new principality, for while besieging Amalfi with his uncle and brother, he joined a passing band of Crusaders on their way to Palestine. Among his army was a nephew of his, a young man named Tancred.

Bohemond was the natural leader of the crusading host but, through a trick, he took Antioch and did not continue on to Jerusalem with the rest of the army, instead remaining in the newly conquered city to carve out a principality for himself there. Tancred also left the main Crusade at Heraclea Cybistra to fight for territory in Cilicia. A great state like the one his cousins were forging in Europe, however, was impossible for Bohemond. He was defeated badly at the Battle of Harran and forced later to sign the Treaty of Devol with Byzantium. Nevertheless, his son Bohemond II inherited the Crusader state. He in turn gave it to his only daughter, Constance, who ruled it until 1163.

Tancred had great luck in carving out a principality around Galilee with the grants of Godfrey of Bouillon, but he relinquished this in 1101.

Tancred and his first wife Muriel (or Muriella) had the following issue:

Tancred and his second wife Fressenda (or Fedesenda) had the following issue:

Relatives of unknown relationship include: