From Infogalactic: the planetary knowledge core
(Redirected from House of Howard)
Jump to: navigation, search

The Howard family is an English aristocratic family founded by John Howard who was created Duke of Norfolk (3rd creation) by Plantagenet monarch Richard III of England in 1483. However, John was also the eldest (although maternal) grandson of the 1st Duke of 1st creation. The Howards have been part of the peerage since the 15th century and remain the Premier Dukes of the Realm in the Peerage of England, acting as Earl Marshal of England. After the English Reformation many Howards remained steadfast in their Catholic faith as the most high profile recusant family; two members, Philip Howard, 20th Earl of Arundel, and William Howard, 1st Viscount Stafford, are regarded as martyrs: a saint and a blessed respectively.

The senior line of the house, as well as holding the Dukedom of Norfolk, are also Earl of Arundel, Earl of Surrey and Earl of Norfolk, as well as holding six baronies. The Arundel title was inherited in 1580, when the Howards became the genealogical successors to the paternally extinct FitzAlans, ancient kin to the Stuarts, dating back to when the family first arrived in Great Britain from Brittany (see Alan fitz Flaad). Thomas Howard, the 4th Duke of Norfolk, married as his first wife Mary FitzAlan; who, after the death of her brother Henry in 1556, became heiress to the Arundel Estates of her father Henry FitzAlan, 19th Earl of Arundel. Her son was the above-mentioned Philip Howard, 20th Earl of Arundel. It is from this marriage that the present Duke of Norfolk takes his name of 'FitzAlan-Howard' and why his seat is in Arundel Castle. There have also been several notable cadet branches; those existing to this day include the Howards of Effingham, Howards of Carlisle, Howards of Suffolk and Howards of Penrith. The former three are earldoms and the latter a barony.

Throughout much of English and later British history, the Howards have played an important role. Claiming descent from folklore figure Hereward the Wake who resisted the Norman conquest, John Howard fought to the death at the Battle of Bosworth Field in defence of the Yorkist cause. They regained favour with the new Tudor dynasty after leading a defence of England from Scottish invasion at the Battle of Flodden and Catherine Howard subsequently became the fifth wife and Queen consort to Henry VIII. Her uncle, Thomas Howard, 3rd Duke of Norfolk, played a significant role in Henrician politics. Charles Howard, 1st Earl of Nottingham, served as Lord Admiral of the English fleet which defeated the invading Spanish Armada.

Arundel Castle has been in the family of the Duke of Norfolk for over 400 years. It is still the principal seat of the Norfolk family. It is a Grade I listed building.[1] 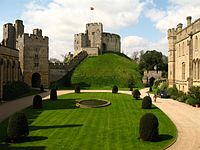 Arundel Castle, home of the Fitzalans and later the Howards

The Howards claim as their ancestor Hereward the Wake who was of local Mercian background and resisted the Norman conquest of England from his base at the Isle of Ely; he has since become a mainstay of English folklore. It is claimed that he was the son of Leofric, Earl of Mercia and Lady Godiva. Ultimately this ancestry traces back to a point of origin in Leicester.

A pedigree compiled and signed by Sir William Dugdale The Norroy King of Arms at the College of Arms dated 8 April 1665 however states that the Howard family are descended from the Howarth [sic Howard] family of Great Howarth Hall, Rochdale. And that “it is clear from above seventy deeds, without date, that the Howards, Dukes of Norfolk, do derive from the Howards [Howarth] of Great Howarth and that William Howard of Wigenhall… was a direct decedent of Osbert Howard de Howarth” given lands in Rochdale on behalf of his service as Master of King Henry I’s Buckhounds. Dugdale's account however has been disputed.[2]

Indisputable descent begins with Sir William Howard (died 1308), a judge who was in the House of Commons in the Model Parliament of 1295. Sir William's son, Sir John Howard, became Sheriff of Norfolk and Suffolk. Sir John was married to Joan de Cornwall, granddaughter of Richard of England, 1st Earl of Cornwall and King of the Romans by his illegitimate child, Sir Richard de Cornwall.[3] 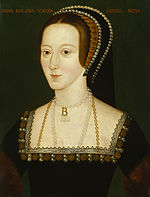 Sir William's great-great-great-grandson, Sir Robert Howard, married Lady Margaret Mowbray, elder daughter of Thomas Mowbray, 1st Duke of Norfolk (1366–1399). The line of Dukes died out in 1476 and the heiress of the last Duke, Anne Mowbray, died at the age of nine in 1481; after declaring her widower King Edward IV's son Richard of Shrewsbury, 1st Duke of York, illegitimate, Richard III of England created the son of Sir Robert and Lady Margaret, John Howard, 1st Duke of Norfolk, of a new creation on 28 June 1483, the 200th anniversary of the Barony of Mowbray to which he was also senior co-heir. John had previously been summoned to Parliament as Lord Howard by Edward IV. He was also created hereditary Earl Marshal. John's son and heir, Thomas Howard, 2nd Duke of Norfolk, was the grandfather of two English queens, Anne Boleyn and Catherine Howard, both wives of Henry VIII.

The Howard family became one of the foremost recusant families due to their continued adherence to Roman Catholicism throughout the English Reformation and its aftermath. This meant that they often could not take their seats in the House of Lords. They are still known as the most prominent English Catholic family.

Both the Dukedom and Earl Marshalship have been the subject of repeated attainders and restorations in the 15th to 17th centuries. Before Charles II restored the titles for good, the Howards had inherited the ancient title of Earl of Arundel through an heiress, and formed additional branches that have continued to this day.

A branch of the Howard family has been seated at Castle Howard, one of England's most magnificent country homes, for over 300 years.

In order of genealogical seniority:

Queen Elizabeth I was the first English monarch to descend from John Howard, 1st Duke of Norfolk who was her great-great grandfather.

Queen Elizabeth II is the first British monarch to descend from John Howard, 1st Duke of Norfolk. Through her mother, Elizabeth Bowes Lyon, she descends twice from the 4th Duke and four times from the 2nd Duke. Her grandchildren descend a total of 34 times from John Howard, 1st Duke, including from the 2nd, 3rd, 4th, 5th and 6th Dukes, as well as from the Earls of Suffolk and Berkshire and the Earls of Effingham, and also from Mary Boleyn 11 times.[4]

Titled families descending through females are too numerous to mention.

The following chart is a family tree of the Dukes of Norfolk, who were members of the Plantagenet, Mowbray and Howard families. It shows how every Duke of Norfolk was a descendant of King Edward I of England.

1. Edward II was the issue of Edward I's first marriage to Eleanor of Castile, (1241–1290), not of his second marriage to Marguerite of France.

2. The Earls of Suffolk do not descend from the 4th Duke of Norfolk's first marriage to Mary Dacre, but rather, from his second marriage to Catherine Knyvett. Knyvett was a great-great granddaughter of Thomas Howard, 2nd Duke of Norfolk, through his daughter, Muriel Howard, who married Sir Thomas Knyvett.

Arms of the Howard Family

The Howard family's original arms were the white bend on red with the crosslets. On marrying the heiress of the dukes of Norfolk, the first Howard duke of Norfolk quartered his arms with those of Thomas of Brotherton 1st Earl of Norfolk, son of King Edward I Longshanks. Starting with the 2nd Duke of Norfolk, the Howards added in the 2nd and 4th quarter the gold lion on red of the Fitzalan Earls of Arundel and the checkered blue and gold of the Warren Earls of Surrey, whom they became heirs of. 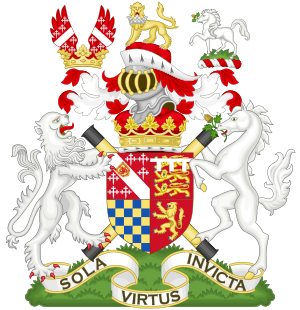 Achievement of the Howard Dukes of Norfolk, showing the batons of their hereditary office, Earl Marshal of England.