From Infogalactic: the planetary knowledge core
Jump to: navigation, search
This article is about the European aristocratic dynasty. For the former state ruled by this dynasty, the Countship and later Duchy of Nassau, see Nassau (state). For other uses, see Nassau (disambiguation). 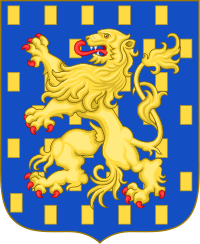 Arms of Nassau: Azure billetty or, a lion rampant of the last armed and langued gules

The House of Nassau is a diversified aristocratic dynasty in Europe. It is named after the lordship associated with Nassau Castle, located in present-day Nassau, Rhineland-Palatinate, Germany.

The lords of Nassau were originally titled "Count of Nassau", then elevated to the princely class as "Princely Counts" (in German: gefürstete Grafen, i.e. Counts who are granted all legal and aristocratic privileges of a Prince).

At the end of the Holy Roman Empire and the Napoleonic Wars, they proclaimed themselves with the permission of the Congress of Vienna "Dukes of Nassau", forming the independent state Nassau (capital city: Wiesbaden), a territory which is at present mainly part of the German Federal State of Hesse (Hessen), and partially of the neighbouring State of Rhineland-Palatinate (Rheinland-Pfalz).

The Duchy was annexed in 1866 after the Austrian-Prussian War as an ally of Austria by Prussia. It was subsequently incorporated into the newly created Prussian Province of Hesse-Nassau.

Today the term Nassau is used in Germany as a name for a geographical, historical and cultural region, but has no longer any political meaning.

According to German tradition, the family name is passed on only in the male line of succession. The House would be therefore, from this (German) perspective, extinct since 1985.[1] However, both Dutch and Luxembourgish monarchic traditions, constitutional rules and legislation in that matter differ from the German one, and thus both countries do not consider the House extinct.

The Grand Duke of Luxembourg uses "Duke of Nassau" as his secondary title and a title of pretense to the dignity of Chief of the House of Nassau (being the most senior member of the eldest branch of the House), but not to lay any territorial claims to the former Duchy of Nassau (which is now part of the Federal Republic of Germany).

Count Dudo-Henry of Laurenburg (ca. 1060 – ca. 1123) is considered the founder of the House of Nassau. He is first mentioned in the purported founding-charter of Maria Laach Abbey in 1093 (although many historians consider the document to be fabricated). The Castle Laurenburg, located a few kms upriver from Nassau on the Lahn, was the seat of his lordship. His family probably descended from the Lords of Lipporn. In 1159, Nassau Castle became the ruling seat, and the house is now named after this castle.

The Counts of Laurenburg and Nassau expanded their authority under the brothers Robert (Ruprecht) I (1123–1154) and Arnold I of Laurenburg (1123–1148). Robert was the first person to call himself Count of Nassau, but the title was not confirmed until 1159, five years after Robert's death. Robert's son Walram I (1154–1198) was the first person to be legally titled Count of Nassau.

The chronology of the Counts of Laurenburg is not certain and the link between Robert I and Walram I is especially controversial. Also, some sources consider Gerhard, listed as co-Count of Laurenburg in 1148, to be the son of Robert I's brother, Arnold I.[2] However, Erich Brandenburg in his Die Nachkommen Karls des Großen states that it is most likely that Gerhard was Robert I's son, because Gerard was the name of Beatrix of Limburg's maternal grandfather.[3]

In 1255, Henry II's sons, Walram II and Otto I, split the Nassau possessions. The descendants of Walram became known as the Walram Line, which became important in the Countship of Nassau and Luxembourg. The descendants of Otto became known as the Ottonian Line, which would inherit parts of Nassau, France and the Netherlands. Both lines would often themselves be divided over the next few centuries. In 1783, the heads of various branches of the House of Nassau sealed the Nassau Family Pact (Erbverein) to regulate future succession in their states. 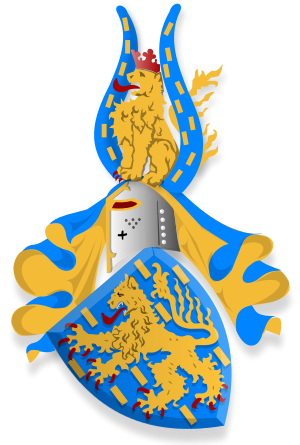 Arms and crest of the Walram line

After Gerlach's death, the possessions of the Walram line were divided into Nassau-Weilburg and Nassau-Wiesbaden-Idstein. 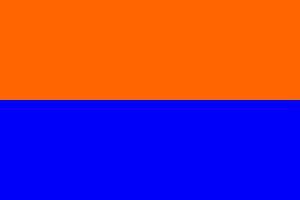 In 1866, Prussia annexed the Duchy of Nassau as the duke had been an ally of Austria in the Second Austro-Prussian War. In 1890, Duke Adolf would become Grand Duke Adolphe of Luxembourg.

From a morganatic marriage, contracted in 1868, descends a family, see Count of Merenberg, which in 1907 was declared non-dynastic. Had they not been excluded from the succession, they would have inherited the headship of the house in 1912.

In 1816, Nassau-Usingen merged with Nassau-Weilburg to form the Duchy of Nassau. See "Dukes of Nassau" above. The princely titles continued to be used, however, evidenced by the carrying of the title Prince of Nassau-Weilburg by the Grand Duke of Luxembourg. Following Frederick Augustus' death, the princely title was adopted (in pretense) by his half brother through an unequal marriage, Karl Philip. As head of the House in 1907, Wilhelm IV declared the Count of Merenberg non-dynastic; by extension, this would indicate that (according to Luxembourgish laws regarding the House of Nassau) this branch would assume the Salic headship of the house in 1965, following the death of the last male Count of Merenberg.[4] 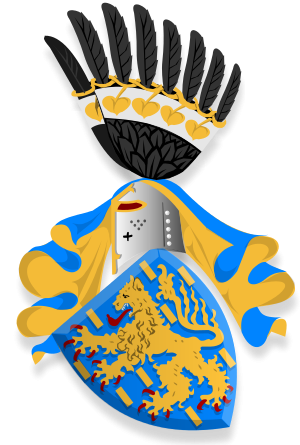 Arms and crest of the Ottonian line (since the 13th century)

In 1739, Nassau-Dillenburg fell to Nassau-Dietz, a.k.a. Orange-Nassau.

Counts and Princes of Nassau-Hadamar

In 1620, the younger line of Nassau-Hadamar was split off from Nassau-Dillenburg

In 1606 the younger line of Nassau-Siegen was split off from the House of Nassau-Dillenburg. After the main line of the House became extinct in 1734, Emperor Charles VI transferred the county to the House of Orange-Nassau.

Counts and Princes of Nassau-Siegen

Counts and Princes of Nassau-Dietz 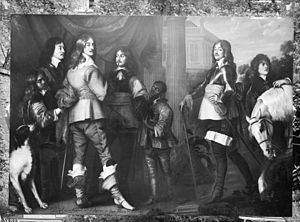 The House of Orange-Nassau stems from the Ottonian Line. The connection was via Engelbert I, who offered his services to the Duke of Burgundy, married a Dutch noblewoman and inherited lands in the Netherlands, with the barony of Breda as the core of his Dutch possessions. 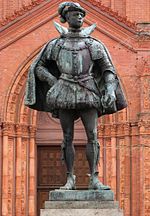 The importance of the Nassaus grew throughout the 15th and 16th century. Henry III of Nassau-Breda was appointed stadtholder of Holland, Zeeland and Utrecht by Emperor Charles V in the beginning of the 16th century. Henry was succeeded by his son, René of Châlon-Orange in 1538, who was, as can be inferred from his name, a Prince of Orange. When René died prematurely on the battlefield in 1544 his possessions and the princely title passed to his cousin, William the Silent, a Count of Nassau-Dillenburg. By dropping the suffix name "Dillenburg" (of the Orange-Nassau-Dillenburg), from then on the family members called themselves "Orange-Nassau."

With the death of William III, the legitimate direct male line of William the Silent became extinct and thereby the first House of Orange-Nassau. John William Friso, the senior agnatic descendant of William the Silent's brother and a cognatic descendant of Frederick Henry, grandfather of William III, inherited the princely title and all the possessions in the low countries and Germany, but not the Principality of Orange itself. The Principality was ceded to France under the Treaty of Utrecht that ended the wars with King Louis XIV. John William Friso, who also was the Prince of Nassau-Dietz, founded thereby the second House of Orange-Nassau (the suffix name "Dietz" was dropped of the combined name Orange-Nassau-Dietz).

After the post-Napoleonic reorganization of Europe, the head of House of Orange-Nassau gained the title "King/Queen of the Netherlands".

In 1702, the Orange-Nassau-Dillenburg line died out and its possessions fell to the Nassau-Dietz line.

Royal Coat of Arms of the Netherlands

Following German laws, the House of Orange-Nassau(-Dietz) has been extinct since the death of Wilhelmina (1962). Dutch laws and the Dutch nation do not consider it extinct.

House of Orange and Nassau

A summary family tree of the House of Orange-Nassau [7] from the joining of the house of Nassau-Breda/Dillenburg and the House of Châlon-Arlay-Orange to the end of the Dutch Republic is shown below. The family spawned many famous statesmen and generals, including two of the acknowledged "first captains of their age", Maurice of Nassau and the Marshal de Turenne.

Complied from Wikipedia and:[11]

The Grand-Ducal Family of Luxembourg