The House of Wettin is a dynasty of German counts, dukes, prince-electors and kings that once ruled territories of present-day German states of Saxony and Thuringia for 953 years. The royal house is one of the oldest of Europe. Its origins can be traced back to the town of Wettin, Saxony-Anhalt. The Wettins gradually rose to power within the Holy Roman Empire. Members of the royal family became the monarchs of several medieval states, starting with Saxon Eastern March in 1030. Other states they gained were Meissen in 1089, Thuringia in 1263 and Saxony in 1423.

The family divided into two ruling branches in 1485 by Treaty of Leipzig: the Ernestine and Albertine branches. The treaty finally ruined a chance for an emergence of a great power in Central Germany, thus helping Brandenburg-Prussia gain influence within the Empire. The older Ernestine branch played a predominant role during the Protestant Reformation. Many ruling monarchs outside Germany were tied to its cadet branch Saxe-Coburg and Gotha. The Albertine branch, while less prominent, ruled the most of Saxony and played a part in Polish history.

The Austrian Holy Roman Emperor preferred the Albertine branch over the Ernestine branch, thus transferring the electoral dignity to the Albertines in 1547.

Agnates of the House of Wettin have, at various times, ascended the thrones of Great Britain, Portugal, Bulgaria, Poland-Lithuania, Saxony, and Belgium. Only the British and Belgian lines retain their thrones today.

The oldest member of the House of Wettin who is known for certain is Theodoric I of Wettin, also known as Dietrich, Thiedericus, and Thierry I of Liesgau (died c. 982). He was most probably based in the Liesgau (located at the western edge of the Harz). Around 1000, the family acquired Wettin Castle which was originally built by the local Slavic tribes ( See Sorbs), after which they named themselves. Wettin Castle is located in Wettin in the Hosgau on the Saale River. Around 1030, the Wettin family received the Eastern March as a fief.[1]

The prominence of the Wettins in the Slavic Saxon Eastern March or Ostmark caused Emperor Henry IV to invest them with the March of Meissen as a fief in 1089. The family advanced over the course of the Middle Ages: in 1263 they inherited the landgraviate of Thuringia (although without Hesse), and in 1423 they were invested with the Duchy of Saxony, centred at Wittenberg, thus becoming one of the prince-electors of the Holy Roman Empire.

The family divided into two ruling branches in 1485 after being under control from Charles IV King of Bohemia and Holy Roman Emperor, the sons of Frederick II, Elector of Saxony, divided the territories hitherto ruled jointly. The elder son Ernest, who had succeeded his father as Prince-elector, received the territories assigned to the Elector (Electorate of Saxony) and Thuringia, while his younger brother Albert obtained the March of Meissen, which he ruled from Dresden. As Albert ruled under the title of "Duke of Saxony", his possessions were also known as Ducal Saxony.

The older Ernestine branch remained predominant until 1547 and played an important role in the beginnings of the Protestant Reformation. Their predominance ended in the Schmalkaldic War, which pitted the Protestant Schmalkaldic League against the Emperor Charles V. Although itself Lutheran, the Albertine branch rallied to the Empire's cause; Charles V rewarded them by forcing the Ernestines to sign away to the Albertines their rights to the Electorship.

The Ernestine line was thereafter restricted to Thuringia and its dynastic unity swiftly crumbled, dividing into a number of smaller states, the Ernestine duchies. It was only in the 19th century that one of the many Ernestine branches, the House of Saxe-Coburg and Gotha, regained importance as the "stud of Europe", by ascending the thrones of Belgium (in 1831), Portugal (1853–1910), Bulgaria (1908–1946) and the United Kingdom (in 1901). 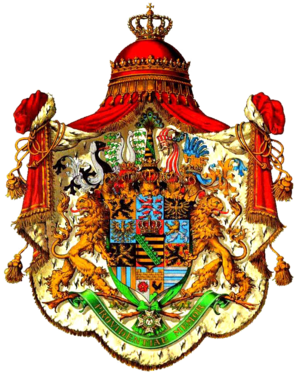 Albertine Wettin's royal coat of arms with the standard arms at the center (Kings of Saxony, 1806–1918)

The Albertine Wettin maintained most of the territorial integrity of Saxony, preserving it as a significant power in the region, and using small appanage fiefs for their cadet branches, few of which survived for significant lengths of time. The Ernestine Wettin, on the other hand, repeatedly subdivided their territory, creating an intricate patchwork of small duchies and counties in Thuringia.

The junior Albertine branch ruled as Electors (1547–1806) and Kings of Saxony (1806–1918) and also played a role in Polish history: two Wettin were Kings of Poland (between 1697–1763) and a third ruled the Duchy of Warsaw (1807–1814) as a satellite of Napoleon. After the Napoleonic Wars, the Albertine branch lost about 40% of its lands, including the old Electorate of Saxony, to Prussia, restricting it to a territory coextensive with the modern Saxony (see Final Act of the Congress of Vienna Act IV: Treaty between Prussia and Saxony 18 May 1815). Frederick Augustus III lost his throne in the German Revolution of 1918.

The present head of the Albertine "House of Saxony" is his great-grandson Prince Ruediger of Saxony, Duke of Saxony, Margrave of Meissen (* 23 December 1953). The headship of Prince Rüdiger is however contested by his second cousin, Alexander (* 1954), son of Roberto Afif, later by change of name Mr Gessaphe, and Princess Maria Anna of Saxony, a sister of the childless former head of the Albertines, Maria Emanuel, Margrave of Meissen (d. 2012) who had adopted his nephew, granting him the name Prince of Saxony, contrary to the rules of male descent under the Salic Law. The dispute is detailed in the article Line of succession to the former Saxon thrones.

Albertine Electors and Kings of Saxony

Residences of the Albertine branch

The House of Saxe-Coburg and Gotha

The senior Ernestine branch lost the electorship to the Albertine in 1547, but retained its holdings in Thuringia, dividing the area into a number of smaller states. One of the resulting Ernestine houses, known as Saxe-Coburg-Saalfeld until 1826 and Saxe-Coburg and Gotha after that, went on to contribute kings of Belgium (from 1831) and Bulgaria (1908–1946), as well as furnishing husbands to queens regnant of Portugal (Prince Ferdinand) and the United Kingdom (Prince Albert). As such, the British and Portuguese thrones became possessions of persons who belonged to the House of Wettin.

From King George I to Queen Victoria, the British Royal family was variously called House of Hanover, being a junior branch of the House of Brunswick-Lüneburg and thus part of the dynasty of the Guelphs. In the late 19th century, Queen Victoria charged the College of Heralds in England to determine the correct personal surname of her late husband, Prince Albert of Saxe-Coburg and Gotha—and, thus, the proper surname of the royal family upon the accession of her son. After extensive research they concluded that it was Wettin, but this name was never used, either by the Queen or by her son or grandson, King Edward VII and King George V; they were simply called 'Saxe-Coburg-Gotha'.

Severe anti-German sentiment during World War I led some influential members of the public quietly to question the loyalty of the Royal Family, because they had a German or German-sounding name. Advisors to King George V again searched for an acceptable surname for the British royal family, but Wettin was rejected as "unsuitably comic".[citation needed] By Order in Council, the name of the British royal family was legally changed to Windsor, prospectively for all time. 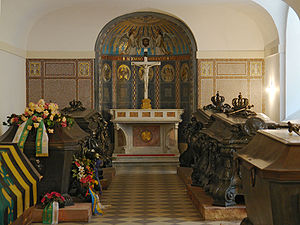 Catholic members of the Royal Albertine branch of the House of Wettin buried in the crypt chapel of the Katholische Hofkirche, Dresden 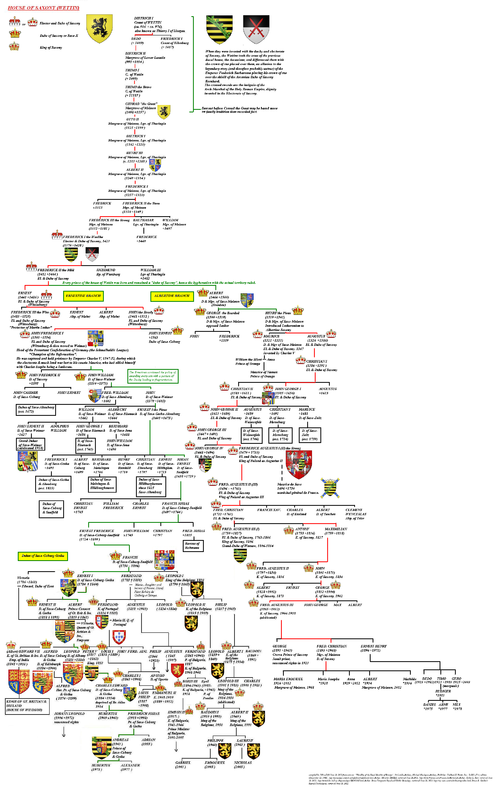 Family Tree of the House of Wettin, the royal & ducal house of Saxony, and later Great Britain, Belgium, Portugal, and Bulgaria