Howard Chandler Christy (January 10, 1872 – March 3, 1952) was an American artist and illustrator famous for the "Christy Girl", a colorful and illustrious successor to the "Gibson Girl".

Christy was born in Morgan County and attended early school in Duncan Falls, Ohio.[1] He then studied in New York at the Art Students League from 1890-1891 and then at the National Academy under William Merritt Chase, first at Chase's summer retreat at Shinnecock, Long Island, and then at his 10th Street Studio. 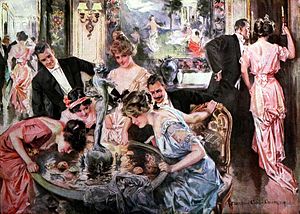 Christy first attracted attention with his realistic illustrations and several articles as a combat artist during the Spanish–American War that included the Battle of Las Guasimas, the Battle of El Caney and the Battle of San Juan Hill, published in Scribner's, Harper's, and Leslie's Weekly magazines, and in Collier's Weekly. Christy gained especial prominence with the series, "Men of the Army and Navy," and a portrait of Colonel Roosevelt that appeared on the cover of his Rough Riders series published in Scribner's. These illustrations propelled Christy to national prominence. From this, he decided to turn away from war and painting men in uniform. Instead, he yearned for beauty and created the "Christy Girl", redefining the portrayal of women in America through his illustrations and portraits. He captured the modern American woman - tall, confident, elegant, witty and athletic.

He also would paint patriotic posters for the US Navy and US Marine Corps. He also came to be known for his illustrations of the works of such as the well-known war correspondent, Richard Harding Davis.

He illustrated books during this period as well. 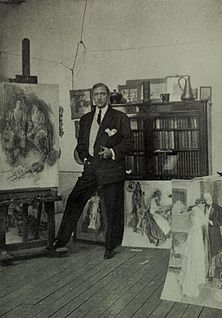 Howard Chandler Christy in his Studio.

Having made his reputation for his work as a combat artist and in support of America's World War One effort, Christy soon was illustrating for numerous magazine covers. He became famous for the "Christy Girl", a picturesque and romantic type of society women peculiarly his own. His work, whether in watercolor, oils, or pen-and-ink, is characterized by great facility, a dashing but not exaggerated style and a strong sense of values. Together with fellow artists Harrison Fisher and Neysa McMein he constituted the Motion Picture Classic magazine's "Fame and Fortune" contest jury of 1921–22, who discovered the It girl, Clara Bow.[2]

In 1940, he painted the Scene at the Signing of the Constitution of the United States, which was installed in the House of Representatives wing in the United States Capitol. Some of his work, newly cleaned, is on display at The Leopard at des Artistes restaurant, the successor to the legendary New York City restaurant Café des Artistes.[3] They include six panels of wood nymphs and paintings such as The Parrot Girl, The Swing Girl, Ponce De Leon, Fall, Spring and the Fountain of Youth.[4]

Another Christy painting has been displayed at the Gettysburg Museum and Visitor Center. The Zanesville Museum of Art in Zanesville, Ohio, has on permanent display Christy's Portrait of Dorothy Barton Thomas, with other Christy posters, prints and paintings in their collection.

Christy was married twice, both of whom had modeled for him as one of his "Christy Girls." The first was Mabelle Gertrude Thompson, whom he married on October 15, 1898, shortly after his return from the Spanish–American War. They had a daughter named Nathalie Chandler Christy.[5][6] They finally divorced in May 1919, after over ten years of periodic separation and bitter divorce and custody battles.

His second marriage was to Nancy May (nee Coone) Palmer, a widow who had modeled for him for over eight years prior to their marriage.[1][5]

In the early 1930s, he met Elise Ford who became his model for the murals on Café des Artistes wall. Forty years his junior, she became his companion until his death at age 80. They had a daughter named Holly born in 1939[7] while he was painting Scene at the Signing of the Constitution of the United States, which is now on display on the stairwell of the West Wing of the U.S. Capitol Building.