From Infogalactic: the planetary knowledge core
Jump to: navigation, search
This article is about the Welsh Methodist preacher. For the professor of history, see Howell Harris (academic).

Howell Harris (January 24, 1714 – July 21, 1773) (Welsh: Hywel Harris) was one of the main leaders of the Welsh Methodist revival in the 18th century, along with Daniel Rowland and William Williams Pantycelyn. 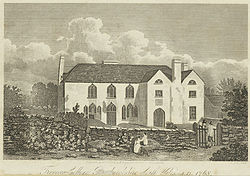 Trevecca College, from an engraving, 1824

Harris was born at Talgarth in Brecknockshire on January 24, 1714. He underwent a religious conversion in May 1735 after listening to a sermon by the Rev. Pryce Davies, the Sunday before Easter, in the parish church on the necessity of partaking of Holy Communion. This led to several weeks of self examination. This reached a climax at Communion on Whit Sunday, May 1735, following the sermon. After what is described as answering the devil's accusations, he received Communion, and came to the conviction that he had received mercy through the blood of Christ. This resulted in a sense of great joy.[1] He immediately began to tell others about this and to hold meetings in his own home encouraging others to seek the same assurance that he had of Christ's forgiveness.

Having failed to be accepted for ordination in the Church of England because of his "Methodist" views, he became a travelling preacher and was tireless in his determination to spread the word throughout Wales. His preaching often led him into personal danger, and he endured considerable persecution and hardship before gaining a following. From 1738 he was supported by Marmaduke Gwynne who was a local squire and early convert.[2]

In 1750, having fallen out with Daniel Rowland, and having been the subject of a public scandal as a result of his close friendship with "Madam" Sidney Griffith, he retreated to his home at Trefeca, near Brecon. In 1752, inspired by the example of the Moravians, he founded a religious community there, known as Teulu Trefeca (=The Trefeca family) with himself as "father".

However, Harris had not given up preaching, and resumed his former activities in 1763, after reconciliation with Daniel Rowland. When he died, ten years later, and was buried close to his birthplace at Talgarth, twenty thousand people are said to have attended his funeral.

He was effectively the founder of the Presbyterian Church of Wales, also known as the Calvinistic Methodist church.

The papers of Howell Harris

Harris kept a detailed diary, in addition to a careful filing of letters he sent and received during his ministry. His papers afford access to a first eye witness of the Welsh Methodist revival. After his death, they were left to gather dust for over a century until O. M. Edwards, in the 1880s, noted their importance and suggested they ought to be cared for. By this time, the once-home of Harris at Trefeca had been turned into a college. The deputy head of the College, Edwin Williams, took on the task of putting the papers in order. They were kept at Trefeca until 1910 when the Presbyterian church of Wales (which ‘owned’ the papers) decided to set up a committee whose responsibility it would be to take care of the papers and to study them.

By 1913 the scale of the work needing to be done on the papers became apparent. As many of the papers were in Latin, it was estimated that it would take much of a decade and a vast sum of money to ready the papers for publication. In 1913, it was decided that a better use of resources would be to set up a Historical Society of the Presbyterian church of Wales that would be responsible for publishing a regular journal to include, amongst other articles, some of Howell Harris’s papers.

It is believed that around 1932, the papers were moved from Trefeca to the denomination's theological College in Aberystwyth. Those papers, along with others from Coleg y Bala (an old college of the denomination in Bala, North Wales), were taken in 1934 to be stored safely at the National Library of Wales. The papers are in the vaults to this day. Recently Dr. Geraint Tudur (son of R. Tudur Jones), Chair of Church History at University of Wales, Bangor, published a biography of Harris: Howell Harris: From conversion to separation, 1735–1750, Cardiff: University of Wales Press, 2000.