Wallkill is a town in Orange County, New York, United States. The population was 27,426 at the 2010 census.

The original land patent for the town was dated 1724, but little was done for decades to develop and settle the region. The town was established in 1772, but part of the town was lost upon the formation of Ulster County, New York. Wallkill's claim to fame during the American Revolution was the production of gunpowder in factories in Phillipsburgh and Craigville for American troops by Henry Wisner and his son-in-law Moses Phillips.[1]

Wallkill is bordered by the towns of Hamptonburgh and Montgomery on the east, Crawford on the north, Mamakating and Mount Hope on the west, and Wawayanda and Goshen on the south. The town almost completely surrounds the city of Middletown.

36.5% of the households had children under the age of 18 living with them; 54.6% were married couples living together, 12.4% had a female householder with no husband present, and 28.6% were non-families. 22.6% of all households were made up of individuals and 7.9% had someone living alone who was 65 years of age or older. The average household size was 2.72 and the average family size was 3.22.

The current supervisor of the Town of Wallkill is Dan Depew, the four councilman are Ralph Carr, Eric Valentin, Antonio Rotundo, and Dan Tulp

The Town of Wallkill Police Department is a full-time police force led by Chief Robert Hertman.

From 2001 to 2006 the Department was subject to oversight by a Federal Court appointed monitor, the result of a consent decree in a suit brought against the Town by the New York Attorney General's office. The suit was prompted by multiple complaints of harassment of young women and other abuses of police authority.[5]

The Department consists of six sergeants, 4 detectives, and 19 patrol officers. 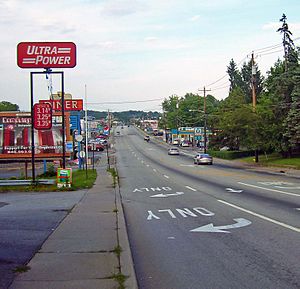 Route 211 looking towards Wallkill from Middletown

The town was the site of the first Lloyd's Supercenter. It is home to many retail stores, shopping centers and restaurants, many of which are located along Route 211, in a suburban pattern related to highway development. Both the Galleria at Crystal Run and a Super Wal-Mart are located in the town. (The latter replaced Orange Plaza, the first mall constructed in the area.)

The Town of Wallkill is home to the Orange County Fair each summer.

The town owns the Town of Wallkill Golf Club. This 18–hole course opened in 1991 and was designed by landscape architect Steve Esposito.

Woodstock Ventures, a group established to produce the Woodstock Festival in 1969, initially leased a tract of land in an industrial park in Wallkill. Town officials, deeply concerned about the size of crowds expected for the event and the logistics involved in hosting it, disallowed the festival the site through the Zoning Board of Appeals. Ultimately the Woodstock festival was held instead in Bethel NY, 40 miles northwest of Wallkill.

Communities and locations in the Town of Wallkill