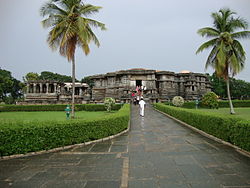 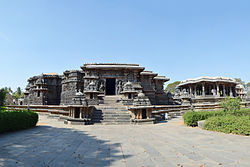 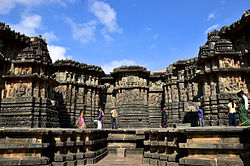 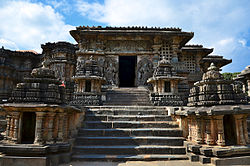 An entrance into the Hoysaleshwara temple in Halebidu 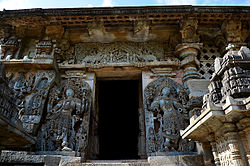 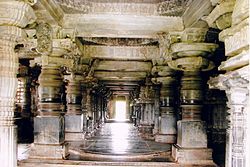 Lathe turned pillars in mantapa of Hoysaleshwara temple in Halebidu 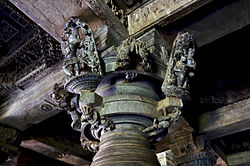 Pillar bracket relief and sculpture at the Hoysaleshwara temple in Halebidu 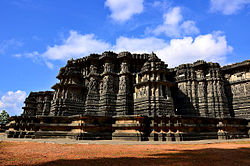 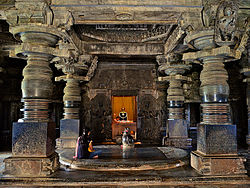 A sanctum inside the Hoysaleshwara temple in Halebidu

Hoysaleswara temple (Kannada: ಹೊಯ್ಸಳೇಶ್ವರ ದೇವಸ್ಥಾನ) (also spelt "Hoysaleshwara" or Hoysaleshvara") is a temple dedicated to Hindu god Shiva. It was built in Halebidu (in modern Karnataka state, India) during the rule of King Vishnuvardhana of the Hoysala Empire in the 12th century. The construction was started around 1120 CE and completed in 1150 CE.[1] During the early 14th century, Halebidu was sacked and looted by Muslim invaders from northern India[2] and the temple fell into a state of ruin and neglect. Previously known as Dorasamudra or Dwarasamudra, Halebidu is 16 km from Belur, 31 km from Hassan and 149 km from Mysore, in the state of Karnataka, India.

According to art critic and historian S. Settar, from contemporary inscriptions it is known that the temple derives its name from the Hoysala ruler at that time, King Vishnuvardhana Hoysaleswara, though interestingly, the construction of the temple was initiated and financed by wealthy Shaiva (a Hindu sect) citizens of the city, prominent among who were Ketamala and Kesarasetti.[3] The temple building activity was taken up in competition to the construction of the Chennakesava Temple at Belur, a Vaishnava (a Hindu sect) temple. Surrounded by numerous tanks, ponds and mantapas, the temple is built in the vicinity of the large Dorasamudhra lake.[4] The tank preceded the temple by nearly 75 years. It is one of the largest temples dedicated to the god Shiva in South India.

The temple is a simple dvikuta vimana (plan with two shrines and two superstructures), one for "Hoysaleswara" (the king) and the other for "Shantaleswara" (named after Shantala Devi, queen of King Vishnuvardhana) and is built with chloritic chist (more commonly known as Soapstone or potstone).[5][6] The temple complex as a whole is elevated on a jagati (platform), which according to historian Kamath, is a feature that became popular in contemporary Hoysala constructions.[7][8] According to art historian Foekema, the two shrines which are adjoining, face east and each have a mantapa (hall) in front. The two mantapas are connected giving a large and imposing view of the hall. Individually, each shrine is smaller than the one at the Chennakesava Temple at Belur and contains a simple linga, the universal symbol of the god Shiva. The plan of the inside of the temple is simple but the exterior looks different because of the introduction of many projections and recesses in the walls. The towers of the shrines that are missing must have followed the star shape of the shrine, just as in many existing well-preserved towers in other Hoysala temples.[9] The superstructure over the vestibule which connects the shrine to the mantapa, called sukanasi (a low tower that looks like an extension of the main tower),[10] and the row of decorated miniature roofs above the eaves of the hall are all missing.[11] The temple was built at a height that provided the architects sufficient horizontal and vertical space to depict large and small sculptures. According to the art critic James Fergusson, the overall effect of the vertical and horizontal lines, the play of the outline, the effect of light and shade and the plan of the projections and recesses all amounts to a "marvellous exhibition of human labor to be found even in the patient east and surpasses anything in Gothic art".[12] The outer walls of these temples contain an intricate array of stone sculptures. The temple of Halebidu, has been described by art critics James Fergusson and Percy Brown as an "outstanding example of Hindu architecture" and as the "supreme climax of Indian architecture".[13][14]

The temple has four porches for entry and the one normally used by visitors as main entry is actually a lateral entrance (north). There is one entry on the south side and two on the east side, facing two large detached open pavilions whose ceiling is supported by lathe turned pillars. All entry porches have miniature shrines as flanking. In addition there is a sanctuary for the Sun god Surya, whose image stands 7 ft (2.1 m) tall. The pavilions enshrine large images of Nandi, the bull, an attendant of Shiva. The pavilions share the same jagati as the main temple. As in the Chennakesava temple, this temple originally had an open mantapa to which outer walls with pierced window screens made with the same material were erected, making the mantapa a closed one.[9] The window screens are devoid of any art work.[15] The interior of the temple is quite plain except for the lathe turned pillars that run in rows between the north and south entrances.[16] According to Settar, the four pillars in front of each shrine are the most ornate and the only ones that have the madanika (chaste maidens) sculptures in their pillar brackets.[17] There are no other madanikas in the temple.

The Hoysaleswara temple is most well known for its sculptures that run all along the outer wall, starting with a dancing image of the god Ganesha on the left side of the south entrance and ending with another image of Ganesha on the right hand side of the north entrance. In all there are two hundred and forty such images. According to the art critic Gerard Foekema, perhaps no other Hoysala temple is as articulate in sculpture as this is and these sculptures are "second to none in all of India".[9] The most intricate of all sculptures are found in the lintels over two of the doorways, one on the south side doorway and the other on one of the eastern doorways.

In this temple the Hoysala architects have broken from the tradition of using five moldings with friezes (which is the "old stlye") at the base of the temple, below the large wall sculptures and the window screens.[18] The outer walls have two eaves that run around the temple. The top eaves, one at the roof of the temple where the superstructure meets the wall, and the second eaves is about a meter below. In between there are decorated miniature towers (aedicule). Below the lower eaves are the wall sculptures and below them, the eight moldings. Historian Kamath calls this type of relief work "horizontal treatment".[19] Each of the eight friezes carries an array of decoration. Going from the bottom where the temple wall meets the platform, the lowest frieze depicts charging elephants which symbolize strength and stability, above which, in order, are friezes with lions which symbolize courage, floral scrolls as decoration, horses symbolizing speed, another band of floral scrolls, depictions from the Hindu epics, mythical beasts called makara and finally a frieze with hansas (swans). According to Foekema, no two animals are alike in a total frieze span of over 200 metres (660 ft). In the epic frieze, the epics are not continuous as they are mixed with other depictions.[20] After the construction of this temple, Hoysala architects used this new kind of horizontal treatment only fifty years later, making it a standard style, though they reduced it to six molding friezes.[21]

Another interesting object in the temple complex is the rare Garuda Sthamba (Garuda pillar). According to Settar, these are different from virgals (Hero stones). Garudas were elite bodyguards of the kings and queens. They moved and lived with the royal family and their only purpose was to protect their master. Upon the death of their master, they committed suicide.[3] The rare pillar on the south side depicts heroes brandishing knives and cutting their own heads. The inscription honors Kuruva Lakshma, a bodyguard of Veera Ballala II. A devoted officer, he took his life and that of his wife and other bodyguards after the death of his master. This event is narrated in an old Kannada inscription on the pillar. A 8 ft (2.4 m) tall sculpture of Ganesha including the platform rests at the South entrance.[3]