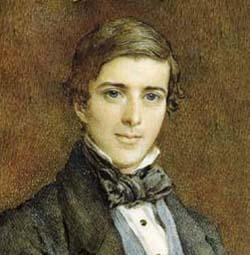 Aldenham the son of George Henry Gibbs,[1] whose father Antony Gibbs was a brother of Sir Vicary Gibbs, a Chief Justice of the Common Pleas.[2] He was a Senior Partner in the family firm of Antony Gibbs & Sons, and was a Director of the Bank of England from 1853 to 1901, its Deputy Governor,[3] and finally its Governor from 1875 to 1877.

He was elected as a Member of Parliament (MP) for the City of London at an unopposed[4] by-election in April 1891,[5] and held the seat until the general election in July 1892,[6] when his oldest son Alban was elected in his place.[4] He also held the office of High Sheriff of Hertfordshire in 1884.[7] In 1896 he was raised to the peerage as Baron Aldenham, of Aldenham in the County of Hertford.[8] A member of the Philological Society, he was a major benefactor to the Oxford English Dictionary.

Lord Aldenham married Louisa Anne, daughter of William Adams and the Hon. Mary Anne Cokayne, in 1845. Their fourth son the Hon. Herbert Cokayne Gibbs was created Baron Hunsdon of Hunsdon in 1923 while their fifth son the Venerable the Hon. Kenneth Francis Gibbs was Archdeacon of St Albans. Lady Aldenham died in 1897. Lord Aldenham survived her by ten years and died in September 1907, aged 88. He was succeeded in the barony by his eldest son Alban.[9]

Children of Lord and Lady Aldenham: