From Infogalactic: the planetary knowledge core
Jump to: navigation, search
This article is about the region. For the magazine, see Hudson Valley (magazine).

The Hudson Valley comprises the valley of the Hudson River and its adjacent communities in the U.S. state of New York, from the cities of Albany and Troy southward to Yonkers in Westchester County.[1] Depending upon the definition delineating its boundaries, the Hudson Valley encompasses a growing metropolis which is home to between 3 and 3.5 million residents centered along the north-south axis of the Hudson River. 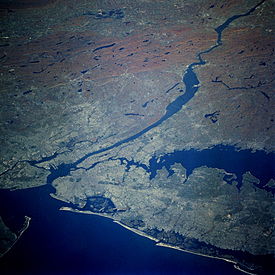 The Lower Hudson Valley, New York City, and the west end of Long Island in 1993 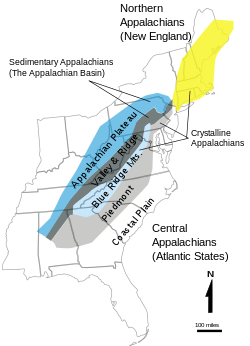 The Lower Hudson Valley cuts through the Appalachian zones of the eastern United States.

The Hudson River valley runs more or less north to south down the eastern edge of New York State, cutting through a series of rock types including Triassic sandstones and redbeds in the south and much more ancient Precambrian gneiss in the north (and east). In the Hudson Highlands, the river enters a fjord cut during previous ice ages. To the west lie the extensive Appalachian highlands. In the Tappan Zee region, the west side of the river has high cliffs produced by an erosion-resistant diabase; these cliffs range from 400–800 feet in height.[2]

During the last ice age, the valley was filled by a large glacier that pushed south as far as Long Island. Near the end of the last ice age, the Great Lakes drained south down the Hudson River, from a large glacial lake called Lake Iroquois.[4] Lake Ontario is the remnant of that Lake. Large sand deposits remain from where Lake Iroquois drained into the Hudson; these are now part of the Rome Sand Plains. 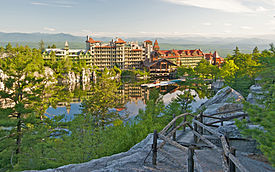 The Mohonk Mountain House in Ulster County, New York was designated a National Historic Landmark in 1986.[5] 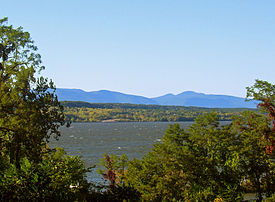 The Catskill Mountains seen from across the Hudson River. 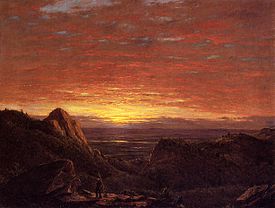 Morning, Looking East over the Hudson Valley from Catskill Mountains by Frederic Edwin Church (1848), of the Hudson River School

At the time of the arrival of the first Europeans in the 17th century, the area of Hudson Valley was inhabited primarily by the Algonquian-speaking Mahican and Lenape Native American peoples,[6][7] known collectively as River Indians.[8]

The first Dutch settlement was in the 1610s with the establishment of Fort Nassau, a trading post (factorij) south of modern-day Albany, with the purpose of exchanging European goods for beaver pelts. Fort Nassau was later replaced by Fort Orange. During the rest of the 17th century, the Hudson Valley formed the heart of the New Netherland colony operations, with the New Amsterdam settlement on Manhattan serving as a post for supplies and defense of the upriver operations.[9]

During the French and Indian War in the 1750s, the northern end of the valley became the bulwark of the British defense against French invasion from Canada via Lake Champlain.[10]

The valley became one of the major regions of conflict during the American Revolution. Part of the early strategy of the British was to sever the colonies in two by maintaining control of the river.[11]

In 1797, the state capital of New York was established permanently at Albany.

Following the building of the Erie Canal, the area became an important industrial center. The canal opened the Hudson Valley and New York City to commerce with the Midwest and Great Lakes regions.[12] However, in the mid 20th century, many of the industrial towns went into decline.[13]

In the early 19th century, popularized by the stories of Washington Irving, the Hudson Valley gained a reputation as a somewhat gothic region inhabited by the remnants of the early days of the Dutch colonization of New York (see, e.g., The Legend of Sleepy Hollow). The area is associated with the Hudson River School, a group of American Romantic painters who worked from about 1830 to 1870.[14]

The natural beauty of the Hudson Valley has earned the Hudson River the nickname "America's Rhineland",[15][16] a comparison to the famous 40 mile (65 km) stretch of Germany's Rhine River valley between the cities of Bingen and Koblenz. A similar 30-mile (48 km) stretch of the east bank in Dutchess and Columbia counties has been designated a National Historic Landmark.

Tourism became a major industry as early as 1810, as elite visitors frequented the mineral water at Ballston Spa and Saratoga Springs for their health. With convenient steamboat connections in New York City, and numerous attractive hotels in romantic settings, tourism became an important industry. Early guidebooks providing suggestions on their itinerary. Middle-class people who read James Fenimore Cooper's novels, or saw the paintings of the Hudson River School, were especially attracted.[17]

The main laboratory building of the IBM Watson Research Center is located in Yorktown Heights.

Tech Valley is a marketing name for the eastern part of New York State, including the Hudson Valley and the Capital District.[18] Originated in 1998 to promote the greater Albany area as a high-tech competitor to regions such as Silicon Valley and Boston, it has since grown to represent the counties in New York between IBM's Westchester County plants in the south and the Canadian border to the north. The area's high technology ecosystem is supported by technologically focused academic institutions including Rensselaer Polytechnic Institute and the State University of New York Polytechnic Institute.[19] Tech Valley encompasses 19 counties straddling both sides of the Adirondack Northway and the New York Thruway,[18] and with heavy state taxpayer subsidy, has experienced significant growth in the computer hardware side of the high-technology industry, with great strides in the nanotechnology sector, digital electronics design, and water- and electricity-dependent integrated microchip circuit manufacturing,[20] involving companies including IBM in Armonk and its Thomas J. Watson Research Center in Yorktown, GlobalFoundries in Malta, and others.[19][21][22] Westchester County has developed a burgeoning biotechnology sector in the 21st century, with over US$1 billion in planned private investment as of 2016,[23] earning the county the nickname Biochester.[24]

The Hudson Valley is the oldest wine making and grape-growing region in the United States, with roots established as early as 1677, and has experienced a resurgence in viticulture in the 21st century. Many wineries are located in the Hudson Valley, offering wine-tasting and other tours.[25] Numerous wine festivals are held in the Hudson Valley, with themes often varying by season.[26] 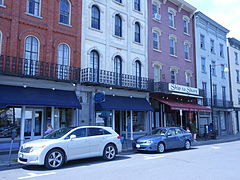 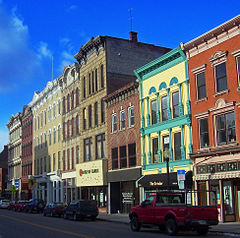 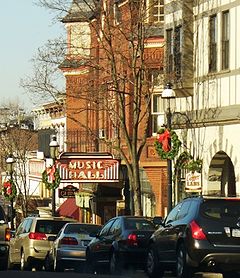 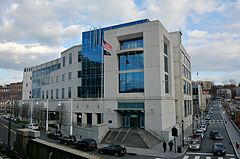 The Hudson Valley is divided into three regions: Lower, Middle, and Upper. The following is a list of the counties within the Hudson Valley sorted by region.[27] The Lower and Mid Hudson Valley is typically considered part of the Downstate New York region due to its geographical and cultural proximity to New York City.

See also: List of fixed crossings of the Hudson River

The Hudson Valley is served by Interstate 87 (the New York State Thruway), Interstate 95, Interstate 287, and Interstate 684. Parkways in the region include the Bronx River Parkway, the Cross County Parkway, the Hutchinson River Parkway, the Saw Mill River Parkway, the Sprain Brook Parkway, and the Taconic State Parkway. The Tappan Zee Bridge connects Tarrytown, New York in Westchester County to South Nyack in Rockland County across the Hudson River. A $4 billion replacement bridge began construction in 2013.[28] The Bear Mountain Bridge crosses the Hudson River from Cortlandt in Westchester County to Bear Mountain State Park at the northern edge of Rockland County. The combination of these numerous highways, proximity to New York City, and the region's large population all lead to substantial traffic enforcement.

Commuter rail service in the region is provided by Metro-North Railroad (operated by the Metropolitan Transportation Authority). Metro-North operates three lines in the region; west to east, they are the Hudson, the Harlem and the New Haven lines. These are former operations of the New York Central and the New York, New Haven and Hartford railroads, each of which stops in the Bronx between Westchester and Manhattan. Amtrak serves Croton-Harmon, New Rochelle, and Yonkers. There are proposals for a cross-county rail line to connect all three lines and provide easier access to Stamford, Connecticut.

The Hudson Valley Renegades is a minor league baseball team affiliated with the Tampa Bay Rays. The team is a member of the New York–Penn League and plays at Dutchess Stadium in Fishkill. The Rockland Boulders of the independent Can-Am League play in Rockland County.