From Infogalactic: the planetary knowledge core
Jump to: navigation, search
For other uses, see Huelva (disambiguation).

Huelva (Spanish pronunciation: [ˈwelβa]) is a city in southwestern Spain, the capital of the province of Huelva in the autonomous region of Andalusia. It is located along the Gulf of Cádiz coast, at the confluence of the Odiel and Tinto rivers. The city has been inhabited since 3000 BC. According to the 2010 census, the city had a population of 149,410. Huelva is home to Recreativo de Huelva, the oldest football club in Spain. 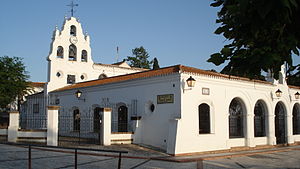 A maritime town between the rivers Anas (modern Guadiana) and Baetis (modern Guadalquivir), it was situated on the estuary of the River Luxia (modern Odiel), and on the road from the mouth of the Anas to Augusta Emerita (modern Mérida).[1]

The city may be the site of Tartessus; it was called Onoba by the Phoenicians. The Greeks kept the name and rendered it Ὄνοβα. It was in the hands of the Turdetani at the time of conquest by Rome, and before the conquest it issued silver coins with Iberian legends. It was called both Onoba Aestuaria[2] or Onuba (used on coinage) during Roman times, or, simply, Onoba.[3] The city was incorporated into the Roman province of Hispania Baetica. The Arabs then called it Walbah and ruled between 714-1250. It suffered substantial damage in the 1755 Lisbon earthquake.

There are still some Roman remains. The city had a mint; and many coins have been found there bearing the name of the town as Onuba.[4] Modern inhabitants are called Onubenses in Spanish. Part of a large wooden wheel that was originally used to drain a copper mine in Huelva was discovered in the late nineteenth century. Dating to the Roman times, it was donated by the British mining company Rio Tinto to the British Museum in 1889.[5]

Mines in the countryside send copper and pyrite to the port for export. From about 1873, the most important company in the area was Rio Tinto, the British mining firm.[6] The mining operations caused severe sulfure dioxide pollution and were frequently accompagnied by protests of local farmers, peasants and miners, allied under the anarchist syndicalist leader Maximiliano Tornet. On 4 February 1888, the Pavi Regiment of the Spanish Army opened fire on demonstrators at the village plaza of Rio Tinto. Historians estimate the number of deaths between 100 to 200.[7] Environmentalists from the nearby Nerva village referred to 1888 as the "year of shots" a hundred years later in their protests against the province government's plans to site a large waste dump in a disused mine in the 1990s.[8]

During World War II, the city was a hub of espionage activities led by members of the large British and German communities. German activity centered on reporting British shipping moving in and out of the Atlantic. Most famously, the city was the location where Operation Mincemeat allowed a body carrying false information to wash ashore.[6][9]

The body of Glyndwr Michael, the fictional "Major William Martin, Royal Marines," of the espionage operation is buried in the San Marco section of the cemetery of Nuestra Senora under a headstone that reads:

The Commonwealth War Graves Commission in January 1998 added an inscription to the gravestone,[10] which reads:

On 11 October 2005, Hurricane Vince made landfall in Huelva as a tropical depression.

The local football club, Recreativo de Huelva, is the oldest in Spain. It was founded in 1889 by workers of Rio Tinto Group, a British mining company.

The Port of Huelva is divided in two sectors: the inner port (in the city) and the outer port (the main one)

Inner Port (one wharf). Constructed in 1972, the East Wharf, replaced constructed harbour facilities of inferior quality between 1900 and 1910. At the moment it is the wharf used for smaller traffic including tourist boats.

Outer Port (six wharves). Was built starting in 1965, to the south of the River Tinto.

In the last ten years, immigration both from abroad and from the surrounding area have sustained population growth. In 2007, the city reached the 145,000 mark, while the metropolitan area had nearly 232,000 inhabitants, encompassing the surrounding areas of Aljaraque, Moguer, San Juan del Puerto, Punta Umbría, Gibraleón, and Palos de la Frontera. The 2006 census recorded a foreign population of almost 5,000 people in the urban centre, the majority of whom were of Moroccan origin.

Among the attractions to visit in this province are the Columbus sites. These sites include the city of Huelva, Moguer, Palos de la Frontera, and the Rábida Monastery. La Rábida is where Columbus sought the aid of the Franciscan brothers in advancing his project of discovery. They introduced him to local rich sailors (the Pinzón brothers), and, eventually, arranged a meeting in Seville with Ferdinand and Isabella. 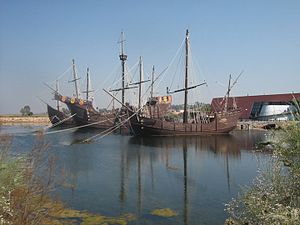 Huelva is twinned with: