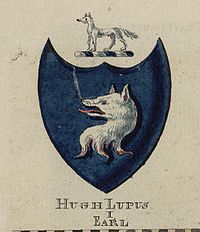 Arms of Hugh 'Lupus, the first earl of Chester

"Hugh Lupus, Earle of Chester, sitting in his parliament with the barons and abbots of that Countie Palatine". Engraving in 1718 edition of William Dugdale's Monasticon Anglicanum

Hugh d'Avranches was born around 1047 as the son of Richard le Goz, Viscount of Avranches. His mother was previously identified as Emma de Conteville; however, C.P. Lewis, author of Hugh's entry in the Oxford Dictionary of National Biography, states that the identification was made 'on the basis of unsatisfactory evidence' and that his mother is unknown.[3]

Hugh inherited from his father a large estate, not just in the Avranchin but scattered throughout western Normandy. The Avranchin is located on the Contentin Peninsula of northern France, just east of Mont-Saint-Michel; it is among the areas (illegally) granted under the Treaty of Saint-Clair-sur-Epte to Normandy by the Kingdom of France that had previously belonged to the Duchy of Brittany.

Hugh became an important councillor of William, Duke of Normandy. His father contributed sixty ships to the invasion of England, and his presence on Senlac Hill in 1066, if not proved, was possible. His father remained in Normandy both to protect the duchy and because he was ill, so Hugh may have been his representative at Hastings.[1]

Hugh was given the command of Tutbury Castle in Staffordshire after Duke William became William I of England. In 1071, Gerbod the Fleming, 1st Earl of Chester was taken prisoner at the Battle of Cassel in France. Taking advantage of the circumstances, the king declared his title vacant, giving Hugh the Earldom (of the second creation).[2] The new Earl was also given palatine powers in view of Cheshire's strategic location on the Welsh Marches.[1][4][5] On Hugh's promotion, Tutbury and its surrounding lands were passed to the Norman Knight, Henry de Ferrers, who had also fought with William at the Battle of Hastings.[3] In 1082, Hugh succeeded to the title of Vicomte d'Avranches.[1]

During his lifetime, the Earl founded the Benedictine Abbeys of Saint-Sever, Normandy and St. Werburgh in Chester as well as giving land endowments to Whitby Abbey, North Yorkshire.[1][2]

Hugh remained loyal to King William II during the rebellion of 1088. He later served Henry I as one of his principal councillors at the royal court.[2]

Hugh spent much of his time fighting with his neighbours in Wales. Together with his cousin Robert of Rhuddlan he subdued a good part of northern Wales. Initially Robert of Rhuddlan held north-east Wales as a vassal of Hugh. However, in 1081 Gruffudd ap Cynan, King of Gwynedd was captured by treachery[citation needed] at a meeting near Corwen. Gruffudd was imprisoned by Earl Hugh in his castle at Chester, but it was Robert who took over his kingdom, holding it directly from the king. When Robert was killed by a Welsh raiding party in 1093 Hugh took over these lands, becoming ruler of most of North Wales, but he lost Anglesey and much of the rest of Gwynedd in the Welsh revolt of 1094, led by Gruffudd ap Cynan, who had escaped from captivity.

In the summer of 1098 Hugh joined forces with Hugh of Montgomery, 2nd Earl of Shrewsbury, in an attempt to recover his losses in Gwynedd. Gruffudd ap Cynan retreated to Anglesey, but then was forced to flee to Ireland when a fleet he had hired from the Danish settlement in Ireland changed sides. The situation was changed by the arrival of a Norwegian fleet under the command of King Magnus III of Norway, also known as Magnus Barefoot, who attacked the Norman forces near the eastern end of the Menai Straits. Earl Hugh of Shrewsbury was killed by an arrow said to have been shot by Magnus himself. The Normans were obliged to evacuate Anglesey, and the following year Gruffydd returned from Ireland to take possession again. Hugh apparently made an agreement with him and did not again try to recover these lands.

Hugh, due to his gluttony, became so fat that he could hardly walk, earning him the nickname of le Gros (the Fat). He would also earn the nickname Lupus (Wolf) for his savage ferocity against the Welsh.[2]

Hugh is credited as siring children to many mistresses.[2] His allegedly illegitimate children include Robert d'Avranche, Otuel d'Avranches, and Giofu d'Avranches.[1][2] Robert D'Avranche, possibly Fitzhugh, Baron Malpas. He received many of the local manors held by Edwin the last Saxon Earl of Mercia (d. 1071). Edwin was the grandson of Leofric, Earl of Mercia. Leofric was the first holder of the title Earl of Chester.[citation needed]

Hugh fell ill and became a monk in July 1101. He died four days later and was buried in the cemetery of St. Werburgh.[3] He was succeeded as Earl of Chester by his son Richard, who married Matilda of Blois, a granddaughter of William the Conqueror. Both Richard and Matilda died in the White Ship disaster (1120), and Hugh was then succeeded by his nephew Ranulph le Meschin, Earl of Chester, son of his sister Margaret by her husband Ranulf de Briquessart, Viscount of the Bessin. His nephew also removed his remains and had them reburied in the Chapter House of Chester Abbey.[3]