Hugh Culling Eardley Childers (25 June 1827 – 29 January 1896) was a British and Australian Liberal statesman of the nineteenth century. He is perhaps best known for his reform efforts at the Admiralty and the War Office. Later in his career, as Chancellor of the Exchequer, his attempt to correct a budget shortfall led to the fall of the Liberal government led by William Ewart Gladstone.

Childers was born in London, the son of Reverend Eardley Childers and his wife Maria Charlotte (née Smith),[1] sister of Sir Culling Eardley, 3rd Baronet and granddaughter of Sampson Eardley, 1st Baron Eardley. He was educated at Cheam School under Pestalozzi and then both Wadham College, Oxford and Trinity College, Cambridge, graduating B.A. from the latter in 1850.[2] Influential on his intellectual development was Adam Smith's theories of free trade, and capital returns.

Childers then decided to seek a career in Australia and on 26 October 1850 arrived in Melbourne, Victoria along with his wife Emily Walker.[1]

Childers joined the government of Victoria and served as Inspector of Denominational schools (meaning Protestant schools) and immigration agent. In 1852 he became a director of the Melbourne, Mount Alexander and Murray River Railway Co. Childers became auditor-general on 26 October 1852 and was nominated to the Victorian Legislative Council.[1][3] In 1852 he placed a bill before the state legislature proposing the establishment of a second university for Victoria, following the foundation of the University of Sydney in 1850. With the receipt of the Royal Assent in 1853, the University of Melbourne was founded, with Childers as its first vice-chancellor.[1] Childers was Collector of Customs from 5 Dec 1853 to 28 November 1855 and Commissioner of Trade & Customs 28 November 1855 to 25 February 1857.[4] Childers was elected to the inaugural Victorian Legislative Assembly for Portland in November 1856, a seat he held until resigning in February 1857.[4]

Childers retained the vice-chancellorship until his return to Britain in March 1857 and received a M.A. from Cambridge the same year.

In 1860 he entered the House of Commons as a Liberal member for Pontefract, and within a few years joined the government of Lord Palmerston, becoming a Civil Lord of the Admiralty in 1864 and then Financial Secretary to the Treasury (a significant role) in 1865.

First Lord of the Admiralty 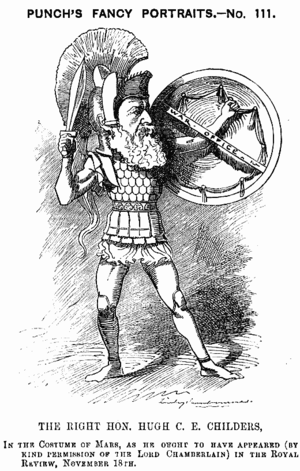 With the election of Gladstone's government in December 1868 he rose to greater prominence, serving as First Lord of the Admiralty. Childers "had a reputation for being hardworking, but inept, autocratic and notoriously overbearing in his dealing with colleagues."[5] He "initiated a determined programme of cost and manpower reductions, fully backed by the Prime Minister, Gladstone described him [Childers] as 'a man likely to scan with a rigid eye the civil expenses of the Naval Service'. He got the naval estimates just below the psychologically important figure of £10,000,000. Childers strengthened his own position as First Lord by reducing the role of the Board of Admiralty to a purely formal one, making meetings rare and short and confining the Sea Lords rigidly to the administrative functions... Initially Childers had the support of the influential Controller of the Navy, Vice-Admiral Sir [Robert] Spencer Robinson."[6] "His re-organisation of the Admiralty was unpopular and poorly done."[5]

Childers was responsible for the construction of HMS Captain in defiance of the advice of his professional advisers, the Controller (Robinson) and the Chief Constructor Edward James Reed. HMS Captain was commissioned in April 1870, and sank on the night of 6/7 September 1870. She was, as predicted by Robison and Reed, insufficiently stable. "Shortly before HMS Captain sank, Childers had moved his son, Midshipman Leonard Childers from Reed's designed HMS Monarch onto the new ship-of-the-line; Leonard did not survive."[5] Childers "faced strong criticism following the Court Martial on the loss of HMS Captain, and attempted to clear his name with a 359 page memorandum, a move described as "dubious public ethics". Vice Admiral Sir Robert Spencer Robinson wrote 'His endeavors were directed to throw the blame which might be supposed to attach to himself on those who had throughout expressed their disapproval of such methods of construction'." Childers unfairly blamed Robinson for the loss of the Captain, and as a result of this Robinson was replaced as Third Lord and Controller of the navy in February 1871.[7] "Following the loss of his son and the recriminations that followed, Childers resigned through ill health as First Lord in March 1871."[5]

Following his resignation he spent some months on the Continent,[5] and recovered sufficiently to take office in 1872 as Chancellor of the Duchy of Lancaster. The consequent ministerial by-election on 15 August 1872 was the first Parliamentary election to be held after the Ballot Act 1872 required the use of a secret ballot.[8]

When the Liberals regained power in 1880, Childers was appointed Secretary for War, a position he accepted reluctantly. He therefore had to bear responsibility for cuts in arms expenditure, a policy that provoked controversy when Britain began fighting; first the Boers in South Africa in 1880 and then the invasion of Egypt in 1882. Childers was also very unpopular with Horse Guards for the reinforcement and expansion on the Cardwell reforms. On 1 May 1881 he passed General Order 41, which outlined a series of improvements known as the Childers reforms.

Childers became Chancellor of the Exchequer in 1882, a post he had coveted. As such, he attempted to implement a conversion of Consols in 1884. Although the scheme proved a failure, it paved the way for the subsequent conversion in 1888. He attempted to resolve a budget shortfall in June 1885 by increasing alcohol duty and income tax. His budget was rejected by Parliament, and the government - already unpopular due to events in Egypt - was forced out of office. Childers's colleague the Earl of Rosebery commented resignedly: "So far as I know the budget is as good a question to go out upon as any other, and Tuesday as good a day."

At the subsequent election in December 1885 Childers lost his Pontefract seat, but returned as an independent Home Ruler for Edinburgh South (one of the few Liberals who adopted this policy before Gladstone's conversion in 1886). Childers then served as Home Secretary in the short-lived ministry of 1886. He was critical of the financial clauses of the First Home Rule Bill, and their withdrawal was largely due to his threat of resignation. Nevertheless, the bill still failed to pass, and its rejection brought down the Liberal government.

Retirement and the Childers Commission 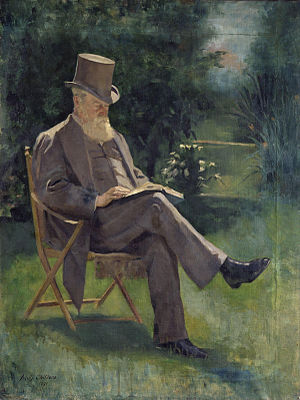 He retired from parliament in 1892, and his last piece of work was the drafting of a report for the 1894 "Financial Relations Commission" on Irish financial matters, of which he was chairman (generally known as the Childers Commission). This found that, compared to the rest of the United Kingdom, Ireland had been overtaxed on a per capita basis by some £2 or £3 million annually in previous decades. The matter was finally debated in March 1897.[9] In the following decades Irish nationalists frequently quoted the report as proof that some form of fiscal freedom was needed to end imperial over-taxation, which was prolonging Irish poverty. Their opponents noted that the extra tax received had come from an unduly high consumption of tea, stout, whiskey and tobacco, and not from income tax. His younger cousin Erskine Childers wrote a book on the matter in 1911.[10]

Childers' 1894 report was still considered influential in 1925 in considering the mutual financial positions between the new Irish Free State and the United Kingdom.[11] In 1926 an Irish Senate debate included claims by some Senators that, with compound interest, Ireland was owed as much as £1.2 billion by Britain.[12]

Childers married Emily Walker in 1850. They had six sons and two daughters. One of their daughters, Emily "Milly" Childers, was a portrait and landscape painter. Emily died in 1875. Childers married Katherine Anne Gilbert in 1879. A cousin, Robert Erskine Childers, was the author of the famous spy novel The Riddle of the Sands, an important figure in the Irish War of Independence and Irish Civil War (during which he was executed), and father of the fourth President of Ireland, Erskine Hamilton Childers.

Towards the end of his ministerial career "HCE" Childers was known for his girth, and so acquired the nickname "Here Comes Everybody", which was later used as a motif in Finnegans Wake by James Joyce.

Childers died in January 1896, aged 68. He is buried on the south side of the central enclosed roundel in Brompton Cemetery, London.