Hugh le Despenser, 1st Lord Despenser (c. 1286[1] – 24 November 1326), also referred to as "the younger Despenser",[2] was the son and heir of Hugh le Despenser, Earl of Winchester (the elder Despenser), and Isabella daughter of William, 9th Earl of Warwick.[3] He rose to national prominence as royal chamberlain and a favourite of Edward II of England. A series of subsequent controversies eventually led to his being hanged, drawn and quartered.

Also in Wales, he was Lord of Glamorgan which gave him possession of Cardiff Castle.

He was also Keeper of the castles, manor, and lands of Brecknock, Hay, Cantref Selyf, etc., in County Brecon, and, in England of Huntington, Herefordshire.

He was given Wallingford Castle although this had previously been given to Queen Isabella for life.

In May 1306 Hugh le Despenser the younger was knighted, and that summer he married Eleanor de Clare, daughter of Gilbert de Clare, 9th Lord of Clare and 7th Earl of Hertford and Joan of Acre.

Eleanor's grandfather, Edward I, owed the elder Despenser 2,000 marks (£1,000,000 at today's prices) and the marriage settled this debt, and was a reward for the elder Hugh's loyal service.

When Eleanor's brother, Gilbert, was killed in 1314 at the Battle of Bannockburn, she unexpectedly became one of the three co-heiresses to the rich Gloucester earldom, and in her right, Hugh inherited Glamorgan and other properties.[4] In just a few years Hugh went from a landless knight to one of the wealthiest magnates in the kingdom.

Eleanor was also the niece of the new king, Edward II of England, and this connection brought Despenser closer to the English royal court. He joined the baronial opposition to Piers Gaveston, the king's favourite (and Hugh's brother-in-law, as Gaveston was married to Eleanor's sister Margaret).

Eager for power and wealth, Despenser seized Tonbridge Castle in 1315, after his brother-in-law's death under the misapprehension that it belonged to his mother-in-law (he relinquished it on discovering that the rightful owner was the Archbishop of Canterbury).[5] In 1318 he murdered Llywelyn Bren, a Welsh hostage in his custody.

Eleanor and Hugh had nine children to survive infancy:

Hugh le Despenser the younger became royal chamberlain in 1318. As a royal courtier, Despenser manoeuvred into the affections of King Edward, displacing the previous favourite, Roger d'Amory. This was much to the dismay of the baronage as they saw him both taking their rightful places at court and being a worse version of Gaveston. By 1320 his greed was running free. He also supposedly vowed to be revenged on Roger Mortimer because Mortimer's grandfather had killed Hugh's grandfather, and once stated (though probably in jest) that he regretted he could not control the wind. By 1321 he had earned many enemies in every stratum of society, from Queen Isabella to the barons to the common people. There was even a plot to kill Despenser by sticking his wax likeness with pins.

Finally the barons prevailed upon King Edward and forced Despenser and his father into exile in August 1321. Following the exile of the Despensers, the barons who opposed them fell out among themselves, and the King summoned the two men back to England. Early in the following year, King Edward took advantage of these divisions to secure the surrender of Marcher Lord Roger Mortimer, and the defeat and execution of the Earl of Lancaster, the Despensers' chief opponents. The pair returned and King Edward quickly reinstated Despenser as royal favourite. His time in exile had done nothing to quell his greed, his rashness, or his ruthlessness.[citation needed] The time from the Despensers' return from exile until the end of Edward II's reign was a time of uncertainty in England. With the main baronial opposition leaderless and weak, having been defeated at the Battle of Boroughbridge, and Edward willing to let them do as they pleased, the Despensers were left unchecked. They grew rich from their administration and corruption.[citation needed] This period is sometimes referred to as the "Tyranny".[citation needed] This maladministration caused hostile feeling for them and, by proxy, Edward II. Despenser repeatedly pressed King Edward to execute Mortimer, who had been held prisoner in the Tower of London, following his surrender. However, Mortimer escaped from the Tower and fled to France.

Like his father, Hugh Despencer the Elder, was accused by a significant number of people of widespread criminality. Examples include;

Relationship with Edward and Isabella

Queen Isabella had a special dislike for Hugh le Despenser the younger. (Froissart wrote that "he was a sodomite.")[10] Alison Weir, in her 2005 book Queen Isabella: Treachery, Adultery, and Murder in Medieval England, speculates that he had raped Isabella and that was the source of her hatred. While Isabella was in France to negotiate between her husband and the French king, she formed a liaison with Roger Mortimer and began planning an invasion. Despenser supposedly tried to bribe French courtiers to assassinate Isabella, sending barrels of silver as payment.[citation needed] Roger Mortimer and the Queen invaded England in October 1326. Their forces numbered only about 1,500 mercenaries to begin with, but the majority of the nobility rallied to them throughout October and November. By contrast, very few people were prepared to fight for Edward II, mainly because of the hatred that the Despensers had aroused. The Despensers fled West with the King, with a sizeable sum from the treasury. The escape was unsuccessful. Separated from the elder Despenser, the King and the younger Despenser were deserted by most of their followers, and were captured near Neath in mid-November. King Edward was placed in captivity and later forced to abdicate in favour of his son. The elder Despenser (the father) was hanged at Bristol on 27 October 1326, and younger Despenser (the son) was brought to trial. 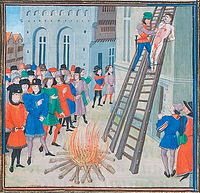 The execution of Hugh le Despenser the younger, from a manuscript of Jean Froissart.

Hugh le Despenser the younger tried to starve himself before his trial,[11] but he did face trial on 24 November 1326, in Hereford, before Mortimer and the Queen. In Froissart's account of the execution, Despenser was then tied to a ladder, and —in full view of the crowd— had his genitals sliced off and burned in his still-conscious sight, then his entrails slowly pulled out, and, finally, his heart cut out and thrown into the fire. Froissart (or rather Jean le Bel's chronicle, on which he relied) is the only source to describe castration, where all other contemporary accounts have Despenser quartered, hanged, and beheaded.[12]

Finally, his corpse was beheaded, his body cut into four pieces, and his head mounted on the gates of London.[2] Mortimer and Isabella feasted with their chief supporters, as they watched the execution.[citation needed]

Four years later, in December 1330, his widow was given permission to gather and bury his remains at the family's Gloucestershire estate,[2] but only the head, a thigh bone and a few vertebrae were returned to her.[13]

What may be the body of Despenser was identified in February 2008 in the village of Abbey Hulton in Staffordshire, the former site of Hulton Abbey. The skeleton, which was first uncovered during archaeological work in the 1970s, appeared to be that of a victim of a drawing and quartering as it had been beheaded and chopped into several pieces with a sharp blade, suggesting a ritual killing. Furthermore, it lacked several body parts, including the ones given to Despenser's wife. Radiocarbon analysis dated the body to between 1050 and 1385, and later tests suggested it to be that of a man over 34 years old. Despenser was 40 at the time of his death. In addition, the Abbey is located on lands that belonged to Hugh Audley, Despenser's brother-in-law, at the time.[13]

No book-length biographical study of Hugh le Despenser exists, although The Tyranny and Fall of Edward II: 1321–1326 by historian Natalie Fryde is a study of Edward's reign during the years that the Despensers' power was at its peak. Fryde pays particular attention to the subject of the Despensers' ill-gotten landholdings.[14] The numerous accusations against the younger Despenser at the time of his execution have never been the subject of close critical scrutiny, although Roy Martin Haines called them "ingenuous" and noted their propagandistic nature.[15]

Despite the crucial and disastrous role he played in the reign of Edward II, Despenser is almost a minor character in Christopher Marlowe's play Edward II (1592), where, as "Spencer", he is little more than a substitute for the dead Gaveston. In 2006, he was selected by BBC History Magazine as the 14th century's worst Briton.[16]

His image on the stained glass window of the Banqueting Hall of Cardiff Castle, shows his coat of arms inverted — a symbol of disgrace.

Despenser appears in Christopher Marlowe's play Edward II (c. 1592) named "Spencer", as well as Bertolt Brecht's The Life of Edward II of England (1923). In Derek Jarman's film Edward II (1991), based on Marlowe's play, he is portrayed by John Lynch.

Despenser is also a character in Les Rois maudits (The Accursed Kings), a series of French historical novels by Maurice Druon. He was portrayed by fr (Gil Vidal) in the 1972 French miniseries adaptation of the series, and by Andy Gillet in the 2005 adaptation.

The New England Protestant reformer Anne (Marbury) Hutchinson was a descendant of Hugh through his grandson Edward.[18] Through her, many Americans including Franklin D. Roosevelt and George W. Bush, can claim Hugh the younger as an ancestor.[citation needed]