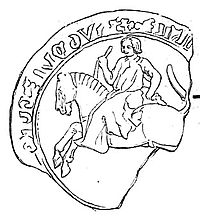 Seal of Hugh IX of Lusignan, damaged but probably depicts the hunting attire usually shown on the family's seals, usually showing the holding of a small hunting dog behind the croup of the saddle

Hugh IX is mentioned under the pseudonym Maracdes ("Emerald") in two poems by the troubadour Gaucelm Faidit, according to the Occitan razós to these poems.

Hugh was portrayed by actor James Cossins in the 1978 BBC TV drama series The Devil's Crown.