Hugh McCulloch (December 7, 1808 – May 24, 1895) was an American statesman who served two non-consecutive terms as U.S. Treasury Secretary under three presidents. He was opposed to the National Banking Act of 1864, and attempted to bring the United States back to the gold standard throughout his career.

Born in Kennebunk, Maine, he was educated at Bowdoin College, studied law in Boston, and in 1833 began practicing law at Fort Wayne, Indiana. He was cashier and manager of the Fort Wayne branch of the state chartered Bank of Indiana and President of the larger organization from 1835 to 1857, and president of its successor, the privately owned Bank of Indiana from 1857 to 1863. Despite his early opposition to the National Banking Act of 1862, he was selected by Salmon P. Chase to be the first Comptroller of the Currency in 1863.[1] During McCulloch's 22 months in office, 868 national banks were chartered and no failures occurred. As the first Comptroller, McCulloch recommended major changes in the banking law and the resulting National Banking Act of 1864 remains the foundation of the national banking system.[2]

McCulloch began his banking career as the President of the Bank of Indiana. In 1833 the bank was established in response the closure of the Second Bank of the United States. Indiana was still a wilderness and no eastern bank was willing take charge of the fledgling state bank. McCulloch was one of the few prominent businessmen in the young state, and although he had no banking experience, he was appointed because he was the most qualified person willing to take the position.

He ran the bank with great efficiency making it one of the most stable in the nation. He remained president until the bank was closed in 1859 and the bank's notes were exchanged for federal notes from the new national bank. He then went on to become president of the Second Bank of Indiana, where he remained until 1865. 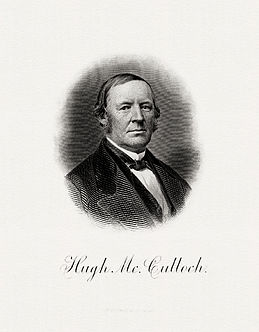 Bureau of Engraving and Printing portrait of McCulloch as Secretary of the Treasury.

On March 9, 1865, McCulloch was appointed as the 27th Secretary of the Treasury by President Abraham Lincoln.[3] His appointment was largely due to his influence with existing state banks. McCulloch later remarked that on the morning of Lincoln's assassination, "I never saw Mr. Lincoln so cheerful and happy...The burden which had been weighing upon him for four long years, and which he had borne with heroic fortitude, had been lifted; the war had been practically ended; the Union was safe."[4] He continued to serve in the Presidential Cabinet of Andrew Johnson until the close of his administration in 1869.

Immediately confronted with inflation caused by the government's wartime issue of greenbacks, he recommended their retirement and a return to the gold standard.[5] In McCulloch's first annual report, issued on December 4, 1865, he strongly urged the retirement of the legal tenders or greenbacks as a preliminary to the resumption of specie payments. However this would have reduced the supply of currency and was unpopular during the period of postwar reconstruction and westward expansion.

In accordance with this suggestion an act was passed, on March 12, 1866, authorizing the retirement of not more than $10,000,000 in six months and not more than $4,000,000 per month thereafter. This act met with strong opposition and was repealed on the February 4, 1868, after only $48,000,000 had been retired. The battle over its revival raged for the next fifty years. McCulloch was also disappointed by the decision of the United States Supreme Court upholding the constitutionality of the legal tenders.

During his tenure, McCulloch maintained a policy of reducing the federal war debt and the careful reintroduction of federal taxation in the South.

Soon after the close of his term of office McCulloch went to England, and spent six years (1870–1876) as a member of the banking firm of Jay Cooke, McCulloch & Co.

From October 1884 until the close of President Chester A. Arthur's term of office in March 1885 he served as the 36th Secretary of the Treasury. During his six months in office at that time, he continued his fight for currency backed by gold, warning that the coinage of silver, used by then as backing for currency, should be halted.[6]

He died at his home, Holly Hill in Prince George's County, Maryland, near Washington, D.C., in 1895 and is buried in Rock Creek Cemetery in D.C. McCulloch Hall, a residence hall at Harvard Business School, was named in his honor.

The chief authority for the life of McCulloch is his own book, Men and Measures of Half a Century (New York, 1888). McCulloch was the last surviving member of the Lincoln cabinet.

His house at Fort Wayne, the Hugh McCulloch House, was listed on the National Register of Historic Places in 1980.[7]