He changed his surname to Percy when he married Lady Elizabeth Seymour (1716-1776), daughter of Algernon Seymour, 7th Duke of Somerset, on 16 July 1740, through a private Act of Parliament.[1] She was Baroness Percy in her own right, and indirect heiress of the Percy family, which was one of the leading landowning families of England, and had previously held the Earldom of Northumberland for several centuries. The title Earl of Northumberland passed by special remainder to Hugh Percy, as Elizabeth's husband, when her father died, who had been created 1st Earl of Northumberland in 1749. In 1766, the earl was created 1st Duke of Northumberland and was created Baron Lovaine on 28 June 1784, with a special remainder in favour of his younger son, Algernon. The Louvain family of Brabant, which married the Percy heiress, was the origin of the Percy family of England. Richard de Percy, 5th Baron Percy (c. 1170-1244) (who adopted the surname Percy), was the son of Joscelin of Louvain (1121–1180), styled "brother of the queen" (referring to Adeliza of Louvain, second wife of King Henry I of England, by his wife Agnes de Perci, suo jure Baroness Percy, the heiress of the Percy estates in England. He was created a Knight of the Order of the Garter in 1756 and a Privy Counsellor in 1762.

Sir Hugh and Lord Brooke (later created Earl of Warwick) were the most important patrons of Canaletto in England. Smithson made a Grand Tour and was in Venice in 1733, where he acquired two large Canalettos for his seat at Stanwick. In 1736 he became one of the two vice presidents of the Society for the Encouragement of Learning. He re-built Stanwick Park c. 1739–1740, mostly to his own designs. He was one of the 175 commissioners for the building of Westminster Bridge, a structure he had Canaletto paint two more large canvases, c. 1747. He built an observatory, designed by Robert Adam, on Ratcheugh Crag, at Longhoughton.[2] Thomas Chippendale dedicated his Gentleman & Cabinet maker's director (1754) to him. He became 2nd Earl of Northumberland (fifth creation) on the death of his father-in-law, Duke Algernon, on 7 February 1750. 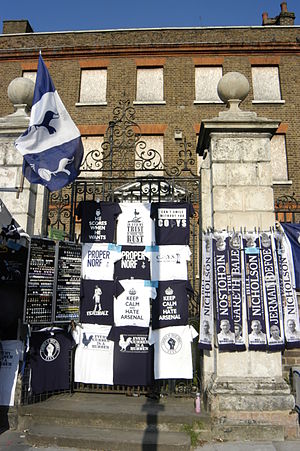 The duke and duchess were prominent patrons of Robert Adam for neoclassical interiors in the Jacobean mansion Northumberland House, the London seat of the Earls of Northumberland; it was demolished ca. 1870–1871, in connection with the creation of Trafalgar Square. Remnants of the Northumberland House Glass Drawing-Room are preserved at the Victoria and Albert Museum. The greater Adam interiors for the Duke are at Syon House, executed in the 1760s. At Alnwick Castle, Northumberland, the Duke employed James Wyatt, whose work has been effaced by later remodellings. One or other Adam designed Brizlee Tower for the duke.[citation needed]

Hugh died in 1786 and was buried in the Northumberland Vault, within Westminster Abbey.[5] [6]

The duke and duchess had three children:[citation needed]

The duke's illegitimate son (by Elizabeth Hungerford Keate Macie), James Smithson (1765–1829), is famed for having made the founding bequest and provided the name for the Smithsonian Institution in Washington, D.C..[8]