Hugh VIII the Old of Lusignan or Hugh III of La Marche or Hugues VIII le Vieux de Lusignan was the eldest son of Hugh VII and of Sarrasine or Saracena de Lezay. He became Seigneur de Lusignan, Couhé, and Château-Larcher and Count of La Marche on his father's death in 1151. Born in Poitou, 1106–1110 or some time after 1125, he died in the Holy Land in 1165 or 1171.

He married in 1140/1141 Bourgogne or Burgondie de Rancon, Dame de Fontenay, daughter of Geoffroi or Geoffroy de Rancon, Seigneur de Taillebourg and wife Fossefie (Falsifie), Dame de Moncontour, by whom he also became Seigneur de Fontenay: she died on April 11, 1169. In 1163 or 1164 he went on pilgrimage and on crusade to the Holy Land and participated in the Battle of Harim, where he was taken prisoner. 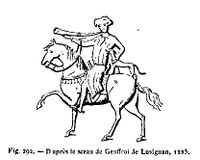