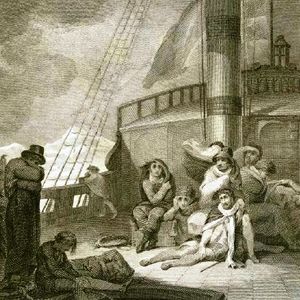 During the war against Scotland called the Rough Wooing, Hugh Willoughby was the commander of a fort built at Lauder in the autumn of 1548.[2] On 10 May 1553, Willoughby sailed as captain of the Bona Esperanza with two other vessels under his command and with chief pilot Richard Chancellor, by a company of London merchants known as the Company of Merchant Adventurers to New Lands, which later became the Muscovy Company.

The ships were seriously delayed by bad winds but eventually reached a point off Northern Norway where they were attacked by storms and "terrible whirlwinds" probably in the vicinity of the North Cape. By 14 September 1553 Willoughby and one other ship had become separated from Chancellor. The two ships travelled east and may have encountered the south island of Novaya Zemlya, known to the Norwegians as Gåselandet (Goose Land). They turned back and as the storms worsened decided to winter in a bay on the coast at a place now known to be on the Kola Peninsula in the general area to the east of Murmansk. Searches were made in three directions but no life was discovered. No-one survived the winter, and the two ships with the bodies of the crews, including Captain Willoughby and his journal, were found by Russian fishermen the following spring. It has also been suggested that Sir Hugh Willoughby and his crew might have been killed by carbon monoxide poisoning, following their decision to insulate their ship from the bitter Arctic cold.[3] The journal was eventually returned to England.

Richard Chancellor escaped from the storms and put into the Norwegian port of Vardø. Setting out again despite warnings of the danger he found the entrance to the White Sea and with local help eventually arrived at Arkhangelsk. There he was summoned to Moscow and Ivan the Terrible's Court, opening a trade with Russia through the northern ports that lasted three hundred years.

During the voyage, Willoughby thought he saw islands to the north. Based on his description, these were subsequently depicted on maps as Willoughby's Land and Macsinof or Matsyn Island.[4]