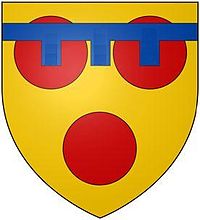 Arms of early Courtenay Earls of Devon: Or, three torteaux a label azure. These are the ancient arms of the House of Courtenay adopted c.1200 at the start of the age of heraldry with a label for difference. These arms are among several depicted (or re-created) on the heavily restored tomb of the 10th (2nd) Earl in Exeter Cathedral, but they are shown (without tinctures) on the monumental brass also at Exeter of his son, Sir Peter Courtenay, where they are impaled with Bohun 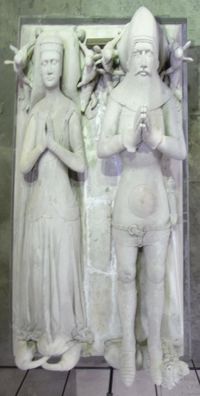 Sir Hugh de Courtenay (12 July 1303 – 2 May 1377),[1] 10th (2nd) Earl of Devon,[2] 2nd Baron Courtenay, feudal baron of Okehampton[3] and feudal baron of Plympton,[4] played an important role in the Hundred Years War in the service of King Edward III. His chief seats were Tiverton Castle and Okehampton in Devon.

Hugh de Courtenay was born on 12 July 1303, the second son of Hugh de Courtenay, 9th Earl of Devon (1276–1340), by his wife Agnes de Saint John, daughter of Sir John de Saint John of Basing, Hampshire. He succeeded to the earldom on the death of his father in 1340.[5] His elder brother, John de Courtenay (c.1296-11 July 1349), Abbot of Tavistock, as a cleric was unmarried and although he succeeded his father as feudal baron of Okehampton,[6] did not succeed to the earldom. [7][8]

By his marriage to Margaret Bohun in 1325, Courtenay acquired the manor of Powderham;[7] it was later granted by Margaret to one of her younger sons, Sir Philip Courtenay, whose family has occupied it until the present day, and who were recognised in 1831 as having been de jure Earls of Devon from 1556.[citation needed]

On 20 January 1327 Courtenay was made a knight banneret.[9] In 1333 both he and his father were at the Battle of Halidon Hill.[10] He was summoned to Parliament on 23 April 1337 by writ directed to Hugoni de Courteney juniori, by which he is held to have become Baron Courtenay during the lifetime of his father.[11] In 1339 he and his father were with the forces which repulsed a French invasion of Cornwall, driving the French back to their ships.[12] The 9th Earl died 23 December 1340 at the age of 64. Courtenay succeeded to the earldom, and was granted livery of his lands on 11 January 1341.[13]

In 1342 the Earl was with Edward III's expedition to Brittany.[14] Richardson states that the Earl took part on 9 April 1347 in a tournament at Lichfield.[15] However, in 1347 he was excused on grounds of infirmity from accompanying the King on an expedition beyond the seas, and about that time was also excused from attending Parliament,[16] suggesting the possibility that it was the Earl's eldest son and heir, Hugh Courtenay, who had fought at the Battle of Crecy on 26 August 1346, who took part in the tournament at Lichfield.

In 1350 the King granted the Earl permission to travel for a year, and in that year the house of the White Friars was built for him in London.[17] In 1352 he was appointed Joint Warden of Devon and Cornwall,[18] and returned to Devon.[citation needed] In 1361 he and his wife were legatees in the will of her brother, Humphrey de Bohun, 6th Earl of Hereford,[19] which greatly increased his land holdings.[citation needed]

Courtenay made an important contribution to the outcome of the Battle of Poitiers[citation needed] in 1356.[20] The Black Prince had sent the baggage train under Courtenay to the rear, which proved to be a wise manoeuvre as the long trail of wagons and carts blocked the narrow bridge and the Frenchmen's escape route. Courtenay played little part in the battle as a result of his defensive role. Courtenay retired with a full pension from the King.[citation needed] In 1373 he was appointed Chief Warden of the Royal Forests of Devon,[21] the income of which in 1374 was assessed by Parliament at £1500 per annum.[citation needed] He was one of the least wealthy of the English earls, and did not compare in this respect with his much wealthier fellow warrior lords such as Arundel, Suffolk, and Warwick.[22] He had nevertheless a retinue of 40 knights, esquires and lawyers in Devon.[citation needed] He also held property by entail, including five manors in Somerset, two in Cornwall, two in Hampshire, one in Dorset and one in Buckinghamshire.[23] The earl had stood as patron in the career of John Grandisson, Bishop of Exeter.[citation needed] He supported the taking-on of debt to build churches in the diocese of Exeter.[citation needed]

On 11 August 1325, in accordance with a marriage agreement dated 27 September 1314, Courtenay married Margaret de Bohun (d. 16 December 1391), eldest surviving daughter of Humphrey de Bohun, 4th Earl of Hereford, by Elizabeth, daughter of King Edward I, by whom he had eight sons and five daughters:[7][1][25]