Hugh of Arles (or Hugh of Provence) was King of Italy from 924 until his death in 947. He was a Bosonid. During his reign, he empowered his relatives at the expense of the aristocracy and tried to establish a relationship with the Byzantine-Roman Empire. He had success in defending the realm from external enemies, but his domestic habits and policies, which showed some evidence of culture in an otherwise barbaric century, created many internal foes and he was removed from power before his death.

Hugh of Arles was born in 880/1,[1] the eldest surviving son of Theobald, Count of Arles, and Bertha of Lotharingia. By inheritance, he was Count of Arles and Vienne, which made him one of the most important and influential nobles in the Kingdom of Provence. After the Emperor Louis III, who was also King of Provence, was captured, blinded, and exiled from Italy in 905, Hugh became his chief adviser and regent. By 911, most of the royal prerogatives were exercised by Hugh and Louis ceded him the titles dux of Provence and marchio of the Viennois.[2] He moved the capital to his family's chief seat of Arles and in 912 married Willa, widow of Rudolph I of Burgundy.[3] Hugh would then unsuccessfully attempt to take Burgundy from Rudolph's son, Rudolph II of Burgundy.[3]

At an unknown date, a Provençal army led by Hugh, his brother Boso, and Hugh Taillefer invaded Lombardy with the support of Hugh's mother. On the basis of the account of Constantine Porphyrogenitus, this event has been dated to as late as 923–924, but the account of Liutprand of Cremona dates the event much earlier, between 917 and 920.[4]

About 922, a sizable faction of Italian nobles revolted against the by-then Emperor Berengar and elected Rudolph II of Burgundy King of Italy.[3] This started a civil war, which resulted in Berengar's death in 924.[3]

Rather than accept Rudolph, Berengar's partisans now elected Hugh as king (925).[4] Rudolph was ejected from Italy in 926 and Hugh crossed the Alps to be crowned. In his absence, Louis of Provence transferred his county of Vienne to Charles-Constantine. Louis died on 5 June 928 and Hugh returned to Provence to sort out a succession.

For whatever reasons, neither Charles Constantine nor Hugh was elected king, but Hugh annexed the kingdom to Italy de facto, issuing diplomata concerning Provence from his Italian chancery in a royal style. He also took control of the right to grant fiefs in Provence.[3]

During his early years of reign, Hugh somewhat improved the central administration of the kingdom, achieving rather more (though not total) success against the Magyar raids that had been plaguing Italy for several decade.

In September 928, Hugh met with Rudolph of France and Herbert II of Vermandois in Burgundy. Hugh granted Herbert's son Odo Vienne in opposition to Charles Constantine. He was still in conflict with Rudolph of Burgundy and hoped to ally with the King of France against the Burgundian monarch. By 930, however, Charles was in complete control of Vienne and by 931, Rudolph of France was claiming suzerainty over the Viennois and Lyonnais. In light of these reverses in his transalpine policy, Hugh turned his attention towards securing his rule in Italy and receiving the imperial crown. He induced the Italian nobility to recognise his son Lothair as their next king and crowned him in April 931. That same year, he accused his half-brother Lambert of Tuscany of conspiring for the crown — perhaps with the support of a faction of nobles — and deposed him, bestowing the March of Tuscany on his brother Boso. Hugh, however, had other reasons for deposing Lambert, who presented an obstacle to his second marriage to Marozia. Lambert's supporters called in Rudolph of Burgundy, whom Hugh bribed off with the gift of the Viennois and Lyonnais, which Rudolph successfully occupied. In 933, Rudolph relinquished all his rights to Italy.

In 936, Hugh replaced Boso of Tuscany with his own son Humbert. He granted Octavion in the Viennois to Hugh Taillefer and patched up his relations with Charles Constantine in a final effort to save influence in Provence. 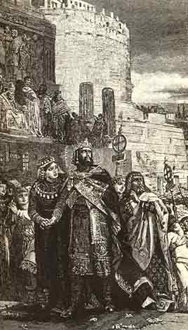 However, Hugh's attempt to strengthen his power further by a second marriage failed disastrously. His bride was Marozia, senatrix and effective ruler of Rome and widow first of Alberic I of Spoleto and then of Hugh's own half-brother Guy of Tuscany. This last fact, though, meant that the marriage was illegal under canon law, because of the affinity relationship between them — a matter that Hugh tried to circumvent by disowning and eliminating the descendants of his mother's second marriage and giving Tuscany to a relative on his father's side of the family, Boso. This in turn, however, alarmed Alberic II, Marozia's teenage son or stepson from her first marriage, who, appealing to Roman distrust of the foreign troops Hugh had brought with him, launched a coup d'état during the wedding festivities. Hugh managed to flee the castle by sliding down a rope and rejoining his army, but Marozia was imprisoned until her death a few years later.

Hugh's power in Italy was damaged but not destroyed by these events. To strengthen his hand in the affairs of Milan, he tonsured his younger illegitimate son, Tebald, to groom him for the position of Archbishop of Milan; however, the ancient cleric, Arderic, whom he installed pro tem lived another twenty-two years. He continued to organise the fight against the Magyars and the Andalusian pirates based at Fraxinet in Provence. Active, if sometimes dubious, diplomacy paid off. He concluded a treaty with Rudolph in 933 by which Rudolf abandoned his claims to Italy in return for being handed Provence over the heads of Louis the Blind's heirs and the marriage of Rudolph's daughter Adelaide to Hugh's son Lothair. Friendly relations were maintained with the Byzantine Empire and, in 942, Hugh even came to terms with Alberic, who married one of Hugh's daughters.

Within the kingdom, Hugh intensified his existing habit of giving any available offices or lands to relations, including his numerous legitimate and illegitimate progeny, and a small circle of old and trusted friends. The effect this had on Italian nobles who saw this as threatening themselves eventually resulted in rebellion. In 941, Hugh expelled Berengar of Ivrea from Italy and abolished the March of Ivrea. In 945, Berengar returned from exile in Germany and defeated Hugh in battle. By a diet Berengar held at Milan, Hugh was deposed, though he managed to come to terms by which he nominally kept the crown and the title rex (king) but returned to Provence, leaving Lothair as nominal king, but with all real power in Berengar's hands.

Hugh retired to Provence, but continued to carry the royal title until 947.

By four wives and at least four mistresses, he left eight children. With Willa, Hugh had no children. Hugh's only legitimate children were both from his second wife, Alda or Hilda, of German origin, whom he married before 924. Her children were Alda, who married Alberic II, and the aforementioned Lothair, Hugh's successor. By his third wife, Marozia, and his fourth, Bertha, daughter of Rudolph II, Hugh had no children. His son Humbert, to whom he gave Tuscany, was his eldest bastard son by a noblewoman named Wandelmoda. By another, low-born mistress named Pezola, and whom the people called Venerem, Hugh had a daughter, Bertha, who married the Byzantine Emperor Romanos II and took the name Eudokia (Eudocia). She inherited her father's lands in Provence. From the same mistress, Hugh had a son named Boso, who became Bishop of Piacenza and imperial chancellor. Hugh's third mistress was Rotruda of Pavia, called Iunonem by the people. She gave him a daughter, Rotlind or Rolend, who married Bernard, Count of Pavia. Tebald, whom Hugh tried to make Archbishop of Milan, was the product of liaison with a Roman woman named Stephanie, to whom the people gave the nickname Semelen. Hugh's youngest son, Geoffrey, Abbot of Nonantola, was of an unknown mistress.

A young page educated at Hugh's court at the traditional Lombard capital, Pavia, grew up to be Liutprand, Bishop of Cremona and chronicler of the 10th century; his loyalty to the memory of Hugh may have helped fuel some of his partisan bitterness in chronicling Hugh's heirs.