The Hughes OH-6 Cayuse (nicknamed "Loach", after the requirement acronym LOH—Light Observation Helicopter) is a single-engine light helicopter with a four-bladed main rotor used for personnel transport, escort and attack missions, and observation. Hughes Helicopters also developed the Model 369 as a civilian helicopter, the Hughes Model 500, currently produced by MD Helicopters as the MD 500.

In 1960, the United States Army issued Technical Specification 153 for a Light Observation Helicopter (LOH) capable of fulfilling various roles: personnel transport, escort and attack missions, casualty evacuation and observation. Twelve companies took part in the competition and Hughes Tool Company's Aircraft Division submitted the Model 369. Two designs, those submitted by Fairchild-Hiller and Bell, were selected as finalists by the Army-Navy design competition board, but the U.S. Army later included the helicopter from Hughes as well. 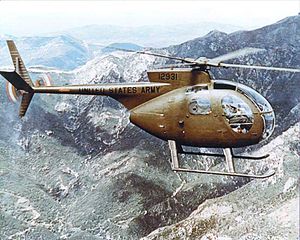 The first Model 369 prototype flew on 27 February 1963. Originally designated as the YHO-6A according to the Army's designation system, the aircraft was redesignated as the YOH-6A in 1962 when the Department of Defense created a Joint designation system for all aircraft. Five prototypes were built, fitted with a 252 shp (188 kW) Allison T63-A-5A,[3] and delivered to the U.S. Army at Fort Rucker, Alabama to compete against the other 10 prototype aircraft submitted by Bell and Fairchild-Hiller. During the course of the competition, the Bell submission, the YOH-4, was eliminated as being underpowered (it used the 250 shp (190 kW) T63-A-5). The bidding for the LOH contract came down to Fairchild-Hiller and Hughes. Hughes won the competition,[4] and the Army awarded a contract for production in May 1965, with an initial order for 714 that was later increased to 1,300 with an option on another 114. Hughes's price was $19,700 per airframe, less engine, while Hiller's price was $27,000 per airframe, less engine. The Hiller design had a boosted control system, while the Hughes design did not. This would account for some of the price difference. Hughes is reported to have told Jack Real that he lost over $100 million in building 1,370 airframes.[5][6] It was reported that Hughes had directed his company to submit a bid at a price below the actual production cost of the helicopter in order to secure this order, resulting in substantial losses on the U.S. Army deal, with the anticipation that an extended production cycle would eventually prove financially viable.[7][8]

In 1968 Hughes submitted a bid to build a further 2,700 airframes. Stanley Hiller complained to the U.S. Army that Hughes had used unethical procedures; therefore, the Army opened the contract for rebidding by all parties. Hiller did not participate in the rebidding, but Bell did, with their redesigned Model 206. After a competitive fly-off, the Army asked for sealed bids. Hughes bid $56,550 per airframe, while Bell bid $54,200. Reportedly, Hughes had consulted at the last moment with his confidant Jack Real, who recommended a bid of $53,550. Hughes, without telling him, added $3,000 to the bid and thus lost the contract.[5][6]

In 1964 the U.S. Department of Defense issued a memorandum directing that all U.S. Army fixed-wing aircraft be transferred to the U.S. Air Force, while the U.S. Army made the transition to rotor-wing aircraft. The U.S. Army's fixed wing airplane, the O-1 Bird Dog, which was utilized for artillery observation and reconnaissance, would be replaced by the OH-6A helicopter.[9] The aircraft entered service in 1966, arriving in the Vietnam War thereafter. The pilots dubbed the new helicopter Loach, a word created by pronunciation of the acronym of the program that spawned the aircraft, LOH (light observation helicopter).

A heavily-modified pair of OH-6As were utilized by the CIA via Air America for a covert wire-tapping mission in 1972. The aircraft, dubbed 500P (penetrator) by Hughes, began as an ARPA project, codenamed "Mainstreet", in 1968. Development included test and training flights in Culver City, California and at Area 51 in 1971. In order to reduce their acoustic signature, the helicopters (N351X and N352X) received a four-blade 'scissors' style tail rotor (later incorporated into the Hughes-designed AH-64 Apache), a fifth rotor blade and reshaped rotor tips, a modified exhaust system and various performance-boosts. Deployed to a secret base in southern Laos (PS-44) in June 1972, one of the helicopters was heavily damaged during a training mission late in the summer. The remaining helicopter deployed a wiretap near Vinh, Vietnam on the night of 5–6 December 1972, which provided the United States with useful information during the Linebacker II campaign and Paris Peace Talks. Shortly thereafter, the aircraft were returned to the U.S., dismantled and quietly found new homes as the now-standard 500s.[15]

Following the April 1980 failure of Operation Eagle Claw (the attempted rescue of American hostages in Tehran), it was determined that the military lacked aircraft and crews who were trained and prepared to perform special operations missions. To remedy this shortcoming, the Army began developing a special aviation task force to prepare for the next attempt to rescue the hostages: Operation Honey Badger.

The architects of the task force identified the need for a small helicopter to land in the most restrictive locations and that was also easily transported on Air Force transport aircraft. They chose the OH-6A scout helicopter to fill that role, and it became known as the Little Bird compared to the other aircraft in the task force, the MH-60 and the MH-47. As a separate part of the project, armed OH-6As were being developed at Fort Rucker, Alabama.[16]

The pilots selected to fly the OH-6A helicopters came from the 229th Attack Helicopter Battalion and were sent to the Mississippi Army National Guard's Army Aviation Support Facility (AASF) at Gulfport, Mississippi, for two weeks of qualification training in the aircraft. When the training was completed, C-141 aircraft transported the aircraft and crews to Fort Huachuca, Arizona, for two weeks of mission training. The mission training consisted of loading onto C-130 transport aircraft which would then transport them to forward staging areas over routes as long as 1,000 nautical miles (1,900 km). The armed OH-6 aircraft from Fort Rucker joined the training program in the fall of 1980.[17]

Operation Honey Badger was canceled after the hostages were released on 20 January 1981, and for a short while, it looked as if the task force would be disbanded and the personnel returned to their former units. But the Army decided that it would be more prudent to keep the unit in order to be prepared for future contingencies. The task force, which had been designated as Task Force 158, was soon formed into the 160th Aviation Battalion. The OH-6A helicopters used for transporting personnel became the MH-6 aircraft of the Light Assault Company and the armed OH-6As became the AH-6 aircraft of the Light Attack Company.

On 1 October 1986, to help meet the increasing demands for support, the 1-245th Aviation Battalion from the Oklahoma National Guard, which had 25 AH-6 and 23 UH-1 helicopters, was placed under the operational control of the 160th. The 1-245th AVN BN enlisted were sent to the Mississippi Army National Guard's Army Aviation Support Facility (AASF) at Gulfport, Mississippi, for two weeks of qualification training in the aircraft. The following 2 week mission was to Yuma for night operation training. The AH/MH little birds were lifted by, 1 C-5, 2 C-130 along with all support kits for the Battalion. Crews trained side by side with the 160th for all operational concepts. The 1-245 modified infantry night vision goggles and worked to develop the necessary skills for rapid deployment with little birds and C-130's.[18] 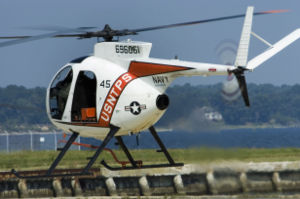 A TH-6B Cayuse helicopter takes off for a training flight from NAS Patuxent River, Maryland 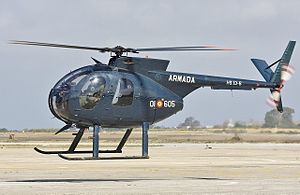 A Spanish naval OH-6M helicopter on lifts off 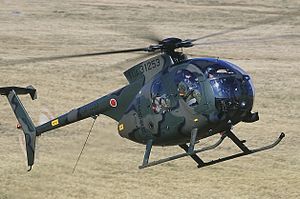 Japanese OH-6D of the JGSDF 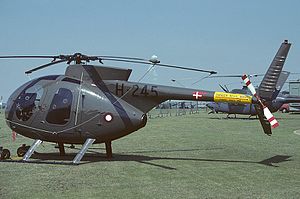