Weaving's first major role was in the 1984 Australian television series Bodyline, as the English cricket captain Douglas Jardine. In film, he first rose to prominence for his performance as Martin in the Australian drama Proof (1991). Other notable roles include Tick in the comedy-drama The Adventures of Priscilla, Queen of the Desert (1994); Red Skull in the superhero film Captain America: The First Avenger (2011) and multiple roles in the science fiction film Cloud Atlas (2012). His roles as a voice actor include Rex in Babe, Noah in Happy Feet and Happy Feet Two, and Megatron in the Transformers film series.

He has received many accolades in his career, including a Satellite Award, MTV Movie Award and several Australian Film Institute Awards.

Weaving was born at the University of Ibadan Teaching Hospital, Nigeria Protectorate, to English parents Anne (née Lennard), a tour guide and former teacher, and Wallace Weaving, a seismologist.[1][2][3] His maternal grandmother was Belgian.[3] A year after his birth, his family returned to England, living in Bedford and Brighton before moving to Melbourne and Sydney in Australia; Johannesburg in South Africa; and then returning to England again.[1] While in England, he attended The Downs School, Wraxall, near Bristol, and Queen Elizabeth's Hospital. His family moved back to Australia in 1976, where he attended Knox Grammar School in Sydney. He graduated from Sydney's National Institute of Dramatic Art in 1981.

Weaving's first major role was in the 1984 Australian television series Bodyline, as the English cricket captain Douglas Jardine. Weaving appeared in the Australian miniseries The Dirtwater Dynasty in 1988 and as Geoffrey Chambers in the drama Barlow and Chambers: A Long Way From Home. He starred opposite Nicole Kidman in the 1989 film Bangkok Hilton. In 1991, Weaving received the Australian Film Institute's "Best Actor" award for his performance in the low-budget Proof. He appeared as Sir John in the 1993 Yahoo Serious comedy Reckless Kelly, a lampoon of Australian outlaw Ned Kelly. Weaving first received international attention in the hit Priscilla, Queen of the Desert in 1994, and provided the voice of Rex the sheepdog and farm leader in the 1995 family film, Babe. In 1998, he received the "Best Actor" award from the Montreal Film Festival for his performance as a suspected serial killer in The Interview.

Weaving earned further international attention with his performance as the enigmatic and evil–minded Agent Smith in the 1999 blockbuster hit The Matrix. He later reprised that role in the film's 2003 sequels, The Matrix Reloaded and The Matrix Revolutions. He was a voice actor in the cartoon film The Magic Pudding.[citation needed] 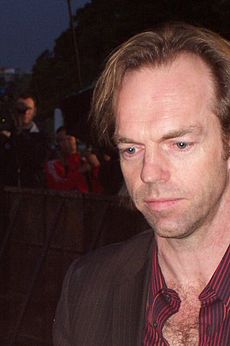 Weaving at the premiere of The Matrix Revolutions in November 2003.

He garnered additional acclaim in the role of half–elven lord Elrond in Peter Jackson's three-film adaptation of The Lord of the Rings, released between 2001 and 2003. Weaving was the main actor in Andrew Kotatko's award-winning film Everything Goes (2004). He starred as a heroin-addicted ex-rugby league player in the 2005 Australian indie film Little Fish, opposite Cate Blanchett. Weaving played the title role as V in the 2006 film V for Vendetta, in which he was reunited with the Wachowskis, creators of The Matrix trilogy, who wrote the adapted screenplay. Actor James Purefoy was originally signed to play the role, but was fired six weeks into filming over creative differences.[4][5][6] Weaving reshot most of James Purefoy's scenes as V (even though his face is never seen) apart from a couple of minor dialogue-free scenes early in the film. Stuntman David Leitch performed all of V's stunts.

Weaving reprised his role as Elrond for the video game The Lord of the Rings: The Battle for Middle-Earth II. He regularly appears in productions by the Sydney Theatre Company (STC). In 2006, he worked with Cate Blanchett on a reprise of the STC production of Hedda Gabler in New York City. In a controversial move by director Michael Bay, Weaving was chosen as the Decepticon leader Megatron vocally in the 2007 live-action film Transformers, rather than using the original version of the character's voice created by the voice actor, Frank Welker. 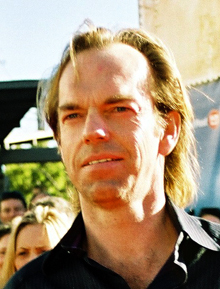 Hugo Weaving at the premiere of The Lord of the Rings: The Return of the King in December 2003.

Weaving himself was unaware of the controversy and had accepted the role based on Michael Bay's personal request; in a November 2008 Sun Herald interview, he said he'd never seen Transformers. Though Weaving reprised his role in two sequels, he does not have much personal investment in the Transformers films. In February 2010, Weaving revealed to The Age: "[Director] Michael Bay talks to me on the phone. I've never met him. We were doing the voice for the second one and I still hadn't seen the first one. I still didn't really know who the characters were and I didn't know what anything was. It's a voice job, for sure, and people assume I've spent my life working on it, but I really know so little about it."[7]

Weaving played a supporting role in Joe Johnston's 2010 remake of the 1941 film The Wolfman, starring Benicio del Toro. Immediately after Wolfman wrapped in spring 2008, he returned home to Australia to film a lead role in the film Last Ride, directed by Glendyn Ivin. In early 2009, Guillermo Del Toro, then director of The Hobbit films, prequels to The Lord of the Rings, confirmed his intent to again cast Weaving as Elrond of Rivendell in a BBC interview.[8] When asked about reprising the role, Weaving replied that he was game, but had not officially been approached. Del Toro eventually left the project; Peter Jackson decided to direct the films himself but Weaving was not officially confirmed in the cast until May 2011.

Weaving spent the summer of 2009 starring in the Melbourne Theatre Company's production of God of Carnage, portraying the caustic lawyer Alain Reille. He returned to the stage in November 2010 in Sydney Theatre Company's Uncle Vanya, costarring Cate Blanchett and Richard Roxburgh.[9] Weaving filmed a guest role on Roxburgh's Australian TV series Rake in May 2010.

In May 2009, Weaving accepted a costarring role in the docudrama Oranges and Sunshine,[10] about the forced migration of thousands of British children to Australia in the 1950s. Filming began in autumn 2009 in Nottingham, England and Adelaide, South Australia and continued through January 2010. The film premiered at the Rome International Film Festival on 28 October 2010 and garnered positive reviews. 2010 also saw the release of Legend of the Guardians (formerly The Guardians of Ga'Hoole), in which Weaving has another high profile voice role,[11] portraying two different owls named Noctus and Grimble in Zack Snyder's film adaptation of Kathryn Lasky's popular series of children's books.

On 4 May 2010, it was officially confirmed by Marvel Studios that Weaving would play the fictional Nazi the Red Skull in the superhero film Captain America: The First Avenger.[12] Weaving completed filming his role on the project in September 2010 and returned to Sydney to prepare for Uncle Vanya. It is unlikely he will sign on for any further Marvel franchise instalments; in an August 2011 Baltimore Sun interview, the actor confided he's weary of typecasting and of "blockbuster" films in general: "I think I've about had enough...I'm not sure how many more of them I'll make. It doesn't feel to me as though they've been the majority of my work, though that's probably the way it seems to most other people.".[13]

On 13 March 2011, The Key Man, which Weaving filmed in 2006, finally debuted at the South By Southwest Festival in Austin, Texas.[14] The child migrant saga Oranges and Sunshine opened in the UK on 1 April, the culmination of months of success on the festival circuit in late 2010-early 2011.[15] In March, the Sydney Theatre Company and John F. Kennedy Center for the Performing Arts announced that STC's 2010 production of Chekhov's Uncle Vanya would be reprised in Washington, D.C. during the month of August[16] In April, months of speculation finally ended when Weaving appeared on The Hobbit's New Zealand set, shortly before a production spokesman officially confirmed the actor's return as Elrond in Peter Jackson's prequel trilogy to The Lord of the Rings.[17] He was part of the cast of the Wachowskis' adaptation of David Mitchell's novel Cloud Atlas.[18] The project, co-starring Tom Hanks, Ben Whishaw, Halle Berry, Jim Broadbent, and Susan Sarandon, began filming in September 2011 and was released in October 2012.

2012 also found Weaving re-focusing on his theatrical career, with a well-received return to the Sydney Theatre Company to star in a new adaptation of Christopher Hampton's play Les Liaisons Dangereuses in March.[19] He portrayed the notorious Vicomte de Valmont, a character he first played onstage in 1987. His frequent stage foil Pamela Rabe costarred. Weaving and Cate Blanchett reprised their roles in STC's internationally lauded production of Uncle Vanya for a ten-day run at New York's Lincoln Center in July.[20]

The busy actor also joined the cast of three forthcoming Australian films in summer 2012. The Western-tinged police thriller Mystery Road, written and directed by Ivan Sen, began filming in June 2012.[21] Weaving is also scheduled to star in the prison drama Healing for director Craig Monahan, with whom he previously made The Interview (1998) and Peaches (2005).[22] He will also the co-star in the Australian anthology film The Turning, based on Tim Winton's collection of linked stories. Weaving will appear in a segment entitled "The Commission", to be directed by his old friend and frequent co-star David Wenham.[23] He ended 2013 co-starring with Richard Roxburgh and Philip Quast in Samuel Beckett's Waiting For Godot, for the Sydney Theatre Company.[24][25]

In the spring of 2013, Weaving reprised the Agent Smith role for a General Electric television commercial for their "Brilliant Machines" innovations in healthcare management technology, which was slated to air during a break from 13 April's edition of Saturday Night Live, and subsequently continued to receive multiple airings on major cable networks.[26]

From 26 July to 27 September 2014, Weaving played the titular role of Sydney Theatre Company's production of Macbeth.[27] In an unusual treatment of the Shakespearian tragedy by young Sydney director Kip Williams, Weaving's performance was described by Peter Gotting of The Guardian as "the role of his career".[28]

When he was 13 years old, Weaving was diagnosed with epilepsy.[31] He has been with his longtime girlfriend Katrina Greenwood since 1984;[32] the two live in Sydney and have two children together, Harry (b. 1989) and Holly (b. 1993). He has a brother, Simon, and a sister, Anna Jane. His niece, Samara Weaving, portrayed Indigo Walker on the long-running Australian soap, Home and Away, and her younger sister Morgan joined the cast as Lottie Ryan.[33] In 2004, Weaving became an ambassador for Australian animal rights organisation Voiceless, the animal protection institute. He attends events, promotes Voiceless in interviews, and assists in their judging of annual grants recipients.[34]