Humayun Ahmed (pronounced: [ɦumae̯un aɦmed̪]; 13 November 1948 – 19 July 2012) was a Bangladeshi writer, dramatist, screenwriter and filmmaker.[4] Ahmed got his break-through by his debut novel Nondito Noroke in 1972.[5] He wrote over 200 fiction and non-fiction books, all of which were bestsellers in Bangladesh.[6][7] Ahmed's writing style was characterized as magic realism.[8] Ahmed's books have been the top sellers at the Ekushey Book Fair during the 1990s and 2000s.[9] He won Bangla Academy Award and Ekushey Padak for his contribution to Bengali literature.

In the early 1990s, Ahmed emerged as a filmmaker. He went on to make total 8 films - all based on his own novels. He received six Bangladesh National Film Awards in different categories for the films Daruchini Dwip, Aguner Poroshmoni and Ghetuputra Komola.

Ahmed was born in Kutubpur, Mymensingh to Foyzur Rahman Ahmed (1921–1971) and Ayesha Foyez (née Khatun) (1930–2014).[10][11] Foyzur served as a sub-divisional police officer in Pirojpur District and was killed during the Bangladesh Liberation War in 1971.[12] In 2011, politician Delwar Hossain Sayeedi was trialed for the killing but was acquitted of the charge in 2013 for lack of evidence.[13][14] Humayun's brother, Muhammad Zafar Iqbal, is a writer and academician. Another brother, Ahsan Habib, became a cartoonist. He had three sisters – Sufia Haider, Momtaz Shahid and Rukhsana Ahmed.[15]

Upon official assignment of his father, Ahmed had lived in Sylhet, Comilla, Chittagong, Dinajpur and Bogra in his childhood.[11]

Ahmed studied in Chittagong Collegiate School.[16] He eventually passed his SSC examination from Bogra Zilla School in 1967 and was listed as second in merit on the Rajshahi Education Board.[17] He passed his HSC examination from Dhaka College in 1969. Then he attended University of Dhaka and graduated with a Bachelor of Science in Chemistry and later with a Master of Science degree.

After his graduation, he worked as a lecturer at Bangladesh Agricultural University for six months before joining Dhaka College to teach Chemistry.[citation needed] Soon after, he went to the United States to earn his Ph.D. in Polymer Chemistry from North Dakota State University.[17]

Ahmed’s debut novel Nondito Noroke was published in 1972 while he was still a university student.[18][19] From the very first novel, he brought into play the aspirations of average middle-class urban families and portrayed the quintessential moments of their lives.[19] His second novel was Shonkhonil Karagar.[20]

Ahmed directed films based on his own stories. His first film, Aguner Poroshmoni, based on Bangladesh Liberation War, won the National Film Award in total eight categories, including the awards for Best Picture and Best Director.[25][26] Another film Shyamal Chhaya was also based on the same war.[27] His last directed film, Ghetuputra Kamola, was set in the colonial period − the story was about a teenage boy.[28]

Shyamol Chhaya and Ghetuputra Kamola were selected as the Bangladeshi entry for the Academy Award for Best Foreign Language Film in 2006 and 2012 respectively, but were not nominated.[29][30]

Nobel laureate economist Muhammad Yunus assessed Ahmed's overall impact by saying "Humayun's works are the most profound and most fruitful that literature has experienced since the time of Tagore and Nazrul."[32] Similarly, according to poet Al Mahmud, “one golden age of Bengali literature ended with Tagore and Nazrul and another began" with Ahmed.[32] Writer Imdadul Haq Milon considered him to be "the almighty lord of Bengali literature, controlling all their actions and thoughts".[32] Dawn, Pakistan's oldest and most widely read English-language newspaper, referred to him as the cultural legend of Bangladesh.[33] Sunil Gangopadhyay described him as the most popular writer in the Bengali language for a century[34] and according to him, Ahmed was even more popular than Sarat Chandra Chattopadhyay.[35]

In 1973, Ahmed married Gultekin Khan.[25][26] Together they had three daughters, Nova, Shila and Bipasha, and one son, Nuhash. Shila Ahmed went on to become a television and film actress. In 2003, Ahmed divorced Gultekin and married actress Meher Afroz Shaon in 2005. He had two sons from the second marriage, Nishad and Ninit.[36]

Ahmed had an open heart surgery at Mount Elizabeth Hospital in Singapore.[37] Few years later, during a routine checkup, the doctors found a cancerous tumor in his colon. On September 14, 2011, he was flown to Memorial Sloan–Kettering Cancer Center in New York City for treatment.[37] During this period, he wrote Deyal, a novel on the life of the first President of Bangladesh Sheikh Mujibur Rahman.[38] Eight months later, on May 12, 2012, he returned to Bangladesh for two weeks.[39]

He died on 19 July 2012 at 11.20 PM BST at Bellevue Hospital in New York City.[40] After resolving a tension in his family over the selection of burial site, he was finally buried in his estate Nuhash Polli.[3][41] 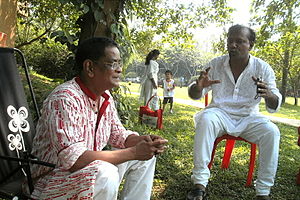 In 1987 Ahmed founded an estate called Nuhash Polli near Pijulia village, in Gazipur Sadar Upazila of Gazipur District,[42] which grew to cover 40 bigha[42] (approximately 14 acres). He would spend much of his time at the estate when he was in Bangladesh, formed a collection of statues there by local artist Asaduzzaman Khan, and of plants from around the world, particularly medicinal and fruit-bearing trees.[42]

In 2012, he was appointed as a Special Adviser to the Bangladesh Mission in the United Nations.[43] 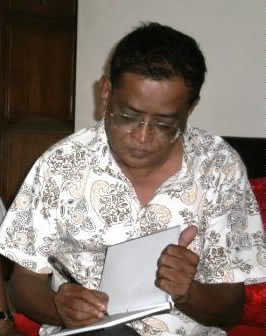