Humphrey of Lancaster, 1st Duke of Gloucester, 1st Earl of Pembroke, KG (3 October 1390 – 23 February 1447), was "son, brother and uncle of kings", being the fourth and youngest son of King Henry IV of England by his first wife, Mary de Bohun, brother to King Henry V of England, and uncle to the latter's son, King Henry VI of England.

Humphrey was the exemplar of the romantic chivalric persona. Mettled and courageous,[1] he was a foil for the beautiful Jacqueline of Hainaut, his wife. His learned, widely read, scholarly approach to the early renaissance cultural expansion demonstrated the quintessential well-rounded princely character. He was an exemplar for Oxford, accomplished, diplomatic, with political cunning. Unlike his brothers, he was not naturally brave, but opinionated, fervent and judgmental. He exaggerated his own achievements, but idolized his brother Henry V.

He was the youngest in a powerful quadrumvirate of brothers, who were very close companions; on 20 March 1413, Henry and Humphrey had been at their dying father's bedside.[2] Thomas, John and Humphrey had all been knighted in 1399. They joined the Order of the Garter together in 1400.

The place of his birth is unknown, but he was named after his maternal grandfather, Humphrey de Bohun, 7th Earl of Hereford.

During the reign of Henry IV, Humphrey received a scholar's education, while his elder brothers fought on the Welsh and Scottish borders. Following his father's death he was created Duke of Gloucester in 1414, and Chamberlain of England, and he took his seat in Parliament. In 1415 he became a member of the Privy Council.

Before embarking for France the army camped at Southampton, where the Earl of Cambridge failed in an assassination plot to kill the king. Humphrey and his brother, the Duke of Clarence, led an Inquiry of Lords to try Lords Cambridge and Scrope for high treason on 5 August.

During Henry V's campaigns in France, Humphrey gained a reputation as a successful commander. His knowledge of siege warfare, gained from his classical studies, contributed to the fall of Honfleur.[2] During the Battle of Agincourt Humphrey was wounded; as he fell, the king sheltered his body, and withstood a determined assault from French knights.[3] For his services, Humphrey was granted offices including Constable of Dover, Warden of the Cinque Ports on 27 November, and King's Lieutenant. His tenure in government was peaceful and successful. This period commenced with Holy Roman Emperor, Sigismund's peace mission. At Paris in March 1416, the Emperor was arrested on the beach by Duke Humphrey, who extracted a promise to keep fealty. The Treaty of "eternal friendship" signed at Canterbury on 15 August served only to anticipate renewed hostility from France.[4]

Upon the death of his brother, King Henry V of England in 1422, Humphrey became Lord Protector to his young nephew King Henry VI. He also claimed the right to the regency of England following the death of his elder brother, John, Duke of Bedford. Humphrey's claims were strongly contested by the lords of the king's council, and in particular his half-uncle, Cardinal Henry Beaufort. Henry V's will, rediscovered at Eton College in 1978, actually supported Humphrey's claims.

In 1436 Philip, Duke of Burgundy, attacked Calais. Duke Humphrey was appointed garrison commander. The Flemings assaulted from the landward but the English resistance was stubborn. Humphrey marched the army to Baillieul, taking the English to safety; he threatened St Omer before sailing home.

Humphrey was consistently popular with the citizens of London and the Commons. He also had a widespread reputation as a patron of learning and the arts. His popularity with the people and his ability to keep the peace earned him the appointment of Chief Justice of South Wales.

However, his unpopular marriage to Eleanor Cobham became ammunition for his enemies. Eleanor was arrested and tried for sorcery and heresy in 1441, and Humphrey retired from public life. He himself was arrested on a charge of treason on 20 February 1447. He died at Bury St Edmunds in Suffolk three days later and was buried at St Albans Abbey, adjacent to St Alban's shrine. At the time, some suspected that he had been poisoned, though it is more probable that he died of a stroke.[5][6] 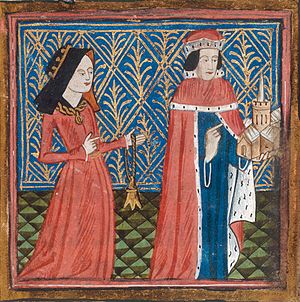 Humphrey and his second wife Eleanor

In about 1423 he married Jacqueline, Countess of Hainaut and Holland, daughter of William VI, Count of Hainaut. Through this marriage Gloucester assumed the title "Count of Holland, Zeeland and Hainault", and briefly fought to retain these titles when they were contested by Jacqueline's cousin Philip the Good (see: War of Succession in Holland). They had a stillborn child in 1424.[citation needed]

The marriage was annulled in 1428, and Jacqueline died (disinherited) in 1436.

Meanwhile, Humphrey remarried in 1428, his second wife being his former mistress, Eleanor Cobham. In 1441, Eleanor was tried and convicted of practising witchcraft against the King in an attempt to retain power for her husband. She was exiled and imprisoned for life.

He had two children:

Both children appear to have been illegitimate offspring of Humphrey and an unknown mistress.[8][9] Eleanor Cobham may have been the mother of one or both children.[10]

After inheriting the manor of Greenwich, Gloucester enclosed Greenwich Park and from 1428 had a palace built there on the banks of the Thames, known as Bella Court and later as the Palace of Placentia. The Duke Humphrey Tower surmounting Greenwich Park was demolished in the 1660s and the site was chosen for building the Royal Observatory.[11] His name lives on in "Duke Humfrey's Library", part of the Bodleian Library in Oxford. Duke Humphrey was a patron and protector of Oxford, donating more than 280 manuscripts to the University. The possession of such a library did much to stimulate new learning.

Duke Humphrey was also a patron of literature, notably of the poet John Lydgate and of John Capgrave. He corresponded with many leading Italian humanists and commissioned translations of Greek classics into Latin. His friendship with Zano Castiglione, Bishop of Bayeux, led to many further connections on the Continent, including Leonardo Bruni, Pietro Candido Decembrio and Tito Livio de Forli. Duke Humphrey also patronised the Abbey of St. Albans.

Duke Humphrey's Walk was the name of an aisle in Old St Paul's Cathedral near to what was popularly believed to be Duke Humphrey's tomb, though, according to W. Carew Hazlitt, it was in reality a monument to John de Beauchamp, 1st Baron Beauchamp de Warwick (d.1360). This was an area frequented by thieves and beggars.[12] The phrase "to dine with Duke Humphrey" was used of poor people who had no money for a meal in reference to this.[13] Saki updates the phrase by referring to a "Duke Humphrey picnic", one without food, in his short story "The Feast of Nemesis". In fact, Humphrey's tomb is in St Albans Abbey. It was restored by Hertfordshire Freemasons in 2000 to celebrate the millennium.[14]

Duke Humphrey is a major character in two William Shakespeare plays. His conflict with Cardinal Beaufort is portrayed in Henry VI, Part 1 and his disgrace and death following his wife's alleged sorcery is depicted in Henry VI, part 2. The portrayal of Humphrey is notable for being one of the most unambiguously sympathetic in the History plays; in Shakespeare's War of the Roses Tetralogy, he is one of only a handful of historical personages to be portrayed in a uniformly positive light. Shakespeare portrays Humphrey's death as a murder, ordered by William de la Pole, 1st Duke of Suffolk, and Queen Margaret of Anjou. He also appears as a minor character in Henry V and Henry IV, Part 2.

The death of Duke Humphrey is the subject of a 2003 mystery novel The Bastard's Tale, by Margaret Frazer. He is also a character in Philippa Gregory's 2011 novel about Jacquetta of Luxembourg, The Lady of the Rivers. 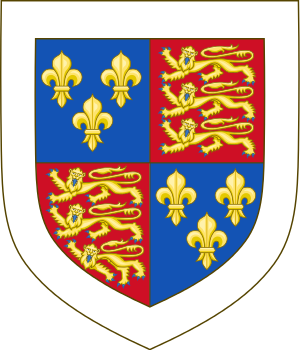 Arms of Humphrey, Duke of Gloucester

As a son of the sovereign, Humphrey bore the arms of the kingdom, differenced by a bordure argent.[15]