From Infogalactic: the planetary knowledge core
Jump to: navigation, search
For other people with similar names, see 1st Duke of Buckingham (disambiguation) or Humphrey Stafford (disambiguation).

Humphrey Stafford, 1st Duke of Buckingham KG (15 August 1402 – 10 July 1460) was an English nobleman. A great-grandson of King Edward III on his mother's side, he was a military commander in the Hundred Years' War and in the Wars of the Roses. 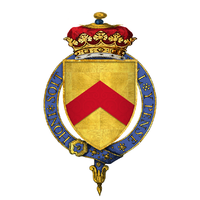 He was born at Stafford, Staffordshire, England, the son of Edmund Stafford, 5th Earl of Stafford, and Anne of Gloucester, daughter of Edward III's youngest son Thomas of Woodstock.

When Humphrey was less than a year old, his father was killed fighting for the royalist forces at the Battle of Shrewsbury in July 1403. He became 6th Earl of Stafford, inheriting a large estate with lands in more than a dozen counties, although over two-thirds of his estate was still occupied by his mother and he only received a reduced income, less than £1260 a year, until he was sixteen. Humphrey was made a royal ward on his father's death, under the control of Henry IV's queen Joan of Navarre.[1]

He was knighted by King Henry V on 22 April 1421. Following Henry V's death, he was part of the regency council, becoming a Privy Councillor in 1424. He was seen as a moderating influence over the power battles between Humphrey, Duke of Gloucester, and Bishop Henry Beaufort.[1] He was made a knight of the Order of the Garter in 1429.

Buckingham had been Lieutenant-General of Normandy between 1430 and 1432 and was created, in 1431, the Count of Perche, a province in English-occupied Normandy by King Henry VI. This title was one of many granted by Henry VI to his leading supporters during the English occupation of France.

With his mother's death in 1438, he received the remainder of his father's estates, worth £1500 plus her half of the Bohun inheritance, another £1200; this included the title of Earl of Buckingham, bringing a further £1000. On 14 September 1444, he was created Duke of Buckingham, making him one of the greatest landowners in England. In 1447, he was granted precedence over all English dukes not of royal blood. Despite his income, during his time in office as the Captain of the Calais garrison, he was heavily out of pocket. He was responsible for ensuring the garrison was paid, leaving him owed £19,395 by the Crown, which was only partially recovered by the time he left in 1451. Public office continued to push him to spend over his annual income, with household costs of over £2000, as well as all the public requirements he needed to fund.[1]

Other offices he held included Seneschal of Halton (from 1439) and Lieutenant of the Marches from 1442 – 1451. Buckingham became Lord Warden of the Cinque Ports and Constable of Dover Castle, also Constable of Queensborough, on the Isle of Sheppey), in 1450. He represented the Crown during peace talks with the French in 1445 and 1446 and in roles such as an envoy to the insurgents with Jack Cade at Blackheath. Buckingham, as a Constable of England, was one of the lords who arrested Humphrey, Duke of Gloucester, at Bury St Edmunds on 18 February 1447.

The Privy Council was controlled by Edmund Beaufort, 2nd Duke of Somerset, from around 1451. Buckingham supported Somerset, trying to maintain peace between him and Richard Plantagenet, 3rd Duke of York. However, from August 1453, the King Henry VI became catatonic and York was appointed Protector of the Realm; when the king recovered in 1455, reversing many of York's decisions, war broke out. Although loyal to Henry VI, Buckingham was reluctant to take up arms for Somerset, even though his son was married to Somerset's daughter. He seemed to be the ideal choice to negotiate and secured Somerset's release from prison in Feb 1455; he was still trying to get a compromise up to the eve of the First Battle of St. Albans on 22 May 1455. Buckingham commanded the king's army of 2,500; only about 50 people died in the battle, but this included Somerset. Buckingham himself was wounded[2] and captured with the king when the Earl of Warwick scored a remarkable success. York now had the political upper hand, made himself Constable of England and kept the prisoner, returning to the role of Protector when the king became ill again. Throughout all of this, Buckingham kept an open mind and helped maintain a relative stability during York's second protectorate.

Unfortunately, his actions estranged him from Queen Margaret. He opposed her decision to dismiss his half-brothers, Henry and Thomas Bourchier, from office and she disliked his decision to support York in military situations. But at the end, he aligned himself with the queen, escorting her to the 'Loveday' reconciliation effort held between the factions on 2 March 1458. When hostilities started again, his presence at the Battle of Ludford Bridge led to the defeat of the Yorkist forces, and he was rewarded by Lancastrians with extensive grants from the estates of Sir William Oldhall.[1]

Warwick regrouped and landed in Sandwich in June 1460. In the lead up to the Battle of Northampton, envoys were sent to negotiate, but Buckingham was no longer conciliatory. Buckingham informed them "The Earl of Warwick shall not come to the king's presence and if he comes he shall die" and told a group of Yorkist bishops that they were not men of peace, but men of war, and there could be no peace with Warwick. The battle was fought on 10 July 1460 and was shortened when Edmund Grey, 1st Earl of Kent, turned traitor to the king and ordered his men to lay down arms, allowing the Yorkists access to the camp. In the ensuing fight, Buckingham, the Earl of Shrewsbury, Lord Egremont and John Beaumont, Viscount Beaumont, were killed by a group of Kentishmen. Buckingham was buried shortly after at Grey Friars, Northampton.[1]

His eldest son having already died of plague,[1] Humphrey was succeeded by his grandson Henry.

The era is recreated by the historical reenactment group Buckingham's Retinue, that attempts to portray the Stafford Household and the Duke of Buckingham's Riding Retinue. The group are considered by English Heritage and the BBC[5] to be sufficiently authentic in their portrayals to have been employed by them in such a capacity.