Sir Humphrey Winch (1555–1625) was an English-born politician and judge who had a distinguished career in both Ireland and England, but whose reputation was seriously damaged by the Leicester witch trials of 1616.

He was born in Bedfordshire, second son of John Winch (died 1598) of Northill. He married Cicely Onslow, daughter of Richard Onslow (died 1571), Speaker of the House of Commons, and his wife Catherine Harding. They had two surviving children; their son Onslow was the father of Sir Humphrey Winch, 1st Baronet. 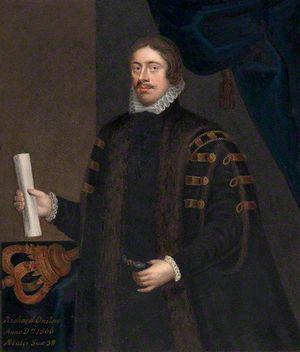 He matriculated from St John's College, Cambridge; was called to the Bar in 1581 and became a bencher of Lincoln's Inn in 1596. He enjoyed the patronage of Oliver St John, 3rd Baron St John of Bletso. Through St John's influence he was elected to the House of Commons as member for Bedford in 1593, and served in each successive Parliament up to 1606.

In the earlier part of his career in Parliament he was identified with the Puritan faction there, and he gave great offence to Queen Elizabeth I in 1593 by supporting a proposal by Sir Peter Wentworth, the chief spokesman for the Puritans, to introduce a Bill to settle the royal succession, a subject on which the Queen absolutely forbade any debate in Parliament or elsewhere, let alone legislation;[1] his offence was compounded by the fact that meetings to discuss the Bill were held in his chambers at LIncoln's Inn. Compared to the fate of Wentworth, who was sent to the Tower of London and died there three years later, Winch's punishment was mild enough: he was forbidden to leave London for a time, but allowed to continue to attend Parliament. His disgrace was temporary, but thereafter he seems to have confined his speeches in the Commons to non-contentious matters.[2]

In 1606, despite his earlier conflict with the Crown, he was recommended to King James I as a man suitable for judicial appointment by reason of his legal ability and integrity. For this purpose he was made a serjeant-at-law and knight, then appointed Chief Baron of the Irish Exchequer.

He received glowing reports as a judge, being praised as "understanding and painstaking".[3] Francis Bacon said that Winch's qualities of "quickness, industry and dispatch" made him a model for other judges. He was conscientious in going on assize and was regular in attendance at the Court of Castle Chamber (the Irish Star Chamber). After two years he was promoted to Lord Chief Justice of the King's Bench in Ireland.

Winch, like many (not all) transplanted English officials, disliked the Irish climate and complained of its effect on his health, and also grumbled about the lack of staff to support him and the "humiliating" fees he received.[4] From 1610 onwards he was lobbying for a return to England. Despite the reluctance of the Dublin Government to lose a valued Crown servant, he was transferred to the English Court of Common Pleas in 1611. He returned to Ireland on official business in 1613, and was regarded as an expert on Irish matters, sitting on the Privy Council committees on Irish affairs.[5]

Winch's illustrious reputation as a judge was dealt a serious blow by his conduct at the summer assizes in Leicester in 1616. Fifteen women had been charged with witchcraft on the sole evidence of a young boy. The judges, Winch and Ranulph Crewe, found the boy to be a credible witness and while a number of the accused were spared, nine were condemned and hanged. A month after the hangings King James I visited Leicester. The King always had a keen interest in witchcraft, and could be quite sceptical about individual cases of alleged supernatural activity: he examined the boy and promptly declared him to be a fraud.[6]

Despite the damage to his reputation caused by the witchcraft trials fiasco, Winch remained on the bench until he died suddenly at Chancery Lane from a stroke in February 1625. An impressive memorial was raised to him in his local church at Everton.