From Infogalactic: the planetary knowledge core
Jump to: navigation, search
This article is about the nursery rhyme. For other meanings, see Humpty Dumpty (disambiguation).

Humpty Dumpty is a character in an English nursery rhyme, probably originally a riddle and one of the best known in the English-speaking world. Though not explicitly described so, he is typically portrayed as an anthropomorphic egg. The first recorded versions of the rhyme date from late eighteenth century England and the tune from 1870 in James William Elliott's National Nursery Rhymes and Nursery Songs.[1] Its origins are obscure and several theories have been advanced to suggest original meanings.

The character of Humpty Dumpty was popularised in the United States by actor George L. Fox (1825–77). As a character and literary allusion he has appeared or been referred to in a large number of works of literature and popular culture, particularly Lewis Carroll's Through the Looking-Glass (1872). The rhyme is listed in the Roud Folk Song Index as No. 13026.

The rhyme is one of the best known and most popular in the English language. The most common modern text is:

It is a single quatrain, with external rhymes[3] that follow the pattern of AABB and with a trochaic metre, which is common in nursery rhymes.[4] The melody commonly associated with the rhyme was first recorded by the composer and nursery rhyme collector James William Elliott in his National Nursery Rhymes and Nursery Songs (London, 1870).[5] The Roud Folk Song Index, which catalogues folk songs and their variations by number, classifies the song as 13026.[6] 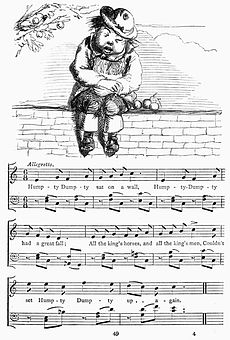 The earliest known version was published in Samuel Arnold's Juvenile Amusements in 1797,[7] with the lyrics:

Could not make Humpty Dumpty where he was before.[8]

A manuscript addition to a copy of Mother Goose's Melody published in 1803 has the modern version with a different last line: "Could not set Humpty Dumpty up again".[8] It was published in 1810 in a version of Gammer Gurton's Garland as:

Humpty Dumpty sate [sic] on a wall,
Humpti Dumpti [sic] had a great fall;
Threescore men and threescore more,
Cannot place Humpty dumpty as he was before.[9]

In 1842 James Orchard Halliwell published a collected version as;

Humpty Dumpty lay in a beck.
With all his sinews around his neck;
Forty Doctors and forty wrights
Couldn't put Humpty Dumpty to rights![10]

According to the Oxford English Dictionary the term "humpty dumpty" referred to a drink of brandy boiled with ale in the seventeenth century.[8] The riddle probably exploited, for misdirection, the fact that "humpty dumpty" was also eighteenth-century reduplicative slang for a short and clumsy person.[11] The riddle may depend on the assumption that, whereas a clumsy person falling off a wall might not be irreparably damaged, an egg would be. The rhyme is no longer posed as a riddle, since the answer is now so well known. Similar riddles have been recorded by folklorists in other languages, such as "Boule Boule" in French, "Lille Trille" in Swedish and Norwegian and "Runtzelken-Puntzelken" or "Humpelken-Pumpelken" in different parts of Germany; although none is as widely known as Humpty Dumpty is in English.[8] 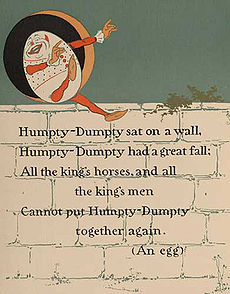 Humpty Dumpty, shown as a riddle with answer, in a 1902 Mother Goose story book by William Wallace Denslow

The rhyme does not explicitly state that the subject is an egg, possibly because it may have been originally posed as a riddle.[8] There are also various theories of an original "Humpty Dumpty". One, advanced by Katherine Elwes Thomas in 1930[12] and adopted by Robert Ripley,[8] posits that Humpty Dumpty is King Richard III of England, depicted in Tudor histories, and particularly in Shakespeare's play, as humpbacked and who was defeated, despite his armies at Bosworth Field in 1485.

The suggestion that Humpty Dumpty was a "tortoise" siege engine, an armoured frame, used unsuccessfully to approach the walls of the Parliamentary held city of Gloucester in 1643 during the Siege of Gloucester in the English Civil War, was put forward in 1956 by Professor David Daube in The Oxford Magazine of 16 February 1956, on the basis of a contemporary account of the attack, but without evidence that the rhyme was connected.[13] The theory, part of an anonymous series of articles on the origin of nursery rhymes, was widely acclaimed in academia,[14] but was derided by others as "ingenuity for ingenuity's sake" and declared to be a spoof.[15][16] The link was nevertheless popularised by a children's opera All the King's Men by Richard Rodney Bennett, first performed in 1969.[17][18]

From 1996 the website of the Colchester tourist board attributed the origin of the rhyme to a cannon recorded as used from the church of St Mary-at-the-Wall by the Royalist defenders in the siege of 1648.[19] In 1648 Colchester was a walled town with a castle and several churches and was protected by the city wall. The story given was that a large cannon, which the website claimed was colloquially called Humpty Dumpty, was strategically placed on the wall. A shot from a Parliamentary cannon succeeded in damaging the wall beneath Humpty Dumpty which caused the cannon to tumble to the ground. The Royalists, or Cavaliers, "all the King's men", attempted to raise Humpty Dumpty on to another part of the wall, but because the cannon was so heavy "All the King's horses and all the King's men couldn't put Humpty together again". In his 2008 book Pop Goes the Weasel: The Secret Meanings of Nursery Rhymes author Albert Jack claimed that there were two other verses supporting this claim.[20] Elsewhere he claimed to have found them in an "old dusty library, [in] an even older book",[21] but did not state what the book was or where it was found. It has been pointed out that the two additional verses are not in the style of the seventeenth century, or the existing rhyme, and that they do not fit with the earliest printed version of the rhyme, which do not mention horses and men.[19]

In Through the Looking-Glass 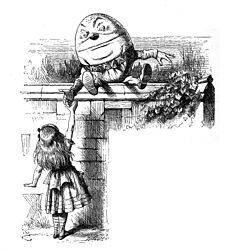 Humpty Dumpty and Alice. From Through the Looking-Glass. Illustration by John Tenniel.

Humpty appears in Lewis Carroll's Through the Looking-Glass (1872), where he discusses semantics and pragmatics with Alice.[22]

"I don't know what you mean by 'glory,' " Alice said.
Humpty Dumpty smiled contemptuously. "Of course you don't—till I tell you. I meant 'there's a nice knock-down argument for you!' "
"But 'glory' doesn't mean 'a nice knock-down argument'," Alice objected.
"When I use a word," Humpty Dumpty said, in rather a scornful tone, "it means just what I choose it to mean—neither more nor less."
"The question is," said Alice, "whether you can make words mean so many different things."
"The question is," said Humpty Dumpty, "which is to be master—that's all."

Alice was too much puzzled to say anything, so after a minute Humpty Dumpty began again. "They've a temper, some of them—particularly verbs, they're the proudest—adjectives you can do anything with, but not verbs—however, I can manage the whole lot! Impenetrability! That's what I say!"[23]

This passage was used in Britain by Lord Atkin in his dissenting judgement in the seminal case Liversidge v. Anderson (1942), where he protested about the distortion of a statute by the majority of the House of Lords.[24] It also became a popular citation in United States legal opinions, appearing in 250 judicial decisions in the Westlaw database as of 19 April 2008[update], including two Supreme Court cases (TVA v. Hill and Zschernig v. Miller).[25]

It has been suggested by A. J. Larner that Carroll's Humpty Dumpty had prosopagnosia on the basis of his description of his finding faces hard to recognise.

"The face is what one goes by, generally," Alice remarked in a thoughtful tone.
"That's just what I complain of," said Humpty Dumpty. "Your face is the same as everybody has—the two eyes,—" (marking their places in the air with his thumb) "nose in the middle, mouth under. It's always the same. Now if you had the two eyes on the same side of the nose, for instance—or the mouth at the top—that would be some help."[26] 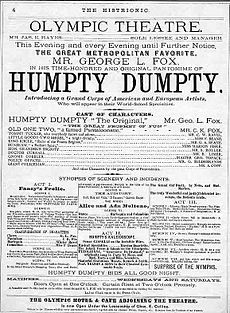 Humpty Dumpty has become a highly popular nursery rhyme character. American actor George L. Fox (1825–77) helped to popularise the character in nineteenth-century stage productions of pantomime versions, music and rhyme.[27] The character is also a common literary allusion, particularly to refer to a person in an insecure position, something that, once broken, would be difficult to reconstruct, or a short and fat person.[28] In addition to his appearance in Through the Looking-Glass as a character, Humpty Dumpty has been used in a large range of literary works, including L. Frank Baum's Mother Goose in Prose (1901), where the rhyming riddle is devised by the daughter of the king, having witnessed Humpty's "death" and her father's soldiers' efforts to save him.[29] In Neil Gaiman's early short story The Case of the Four and Twenty Blackbirds, the Humpty Dumpty story is turned into a film noir-style hardboiled crime story, involving also Cock Robin, the Queen of Hearts, Little Bo Peep, Old Mother Hubbard and other characters from popular nursery rhymes.[30] Robert Rankin used Humpty Dumpty as one victim of a serial fairy-tale character murderer in The Hollow Chocolate Bunnies of the Apocalypse (2002).[31] Jasper Fforde included Humpty Dumpty in two of his novels, The Well of Lost Plots (2003)[32] and The Big Over Easy (2005),[33] which use him respectively as a ringleader of dissatisfied nursery rhyme characters threatening to strike and as the victim of a murder.

The rhyme has also been used as a reference in more serious literary works, including as a recurring motif of the Fall of Man in James Joyce's 1939 novel Finnegans Wake.[34] Robert Penn Warren's 1946 American novel All the King's Men, the story of populist politician Willie Stark's rise to the position of governor and eventual fall, based on the career of the corrupt Louisiana Senator Huey Long, won the 1947 Pulitzer Prize. It was made into a film All the King's Men, which won the 1949 Academy Award for best motion picture.[35] This was echoed in Carl Bernstein and Bob Woodward's book All the President's Men, about the Watergate scandal, referring to the failure of the President's staff to repair the damage once the scandal had leaked out. It was filmed as All the President's Men in 1976, starring Robert Redford and Dustin Hoffman.[36] Similarly, Humpty Dumpty is referred to in Paul Auster's 1985 novel City of Glass, when two characters discuss him as "the purest embodiment of the human condition" and quote extensively from Through the Looking Glass.[37]

It has also been used as a common motif in popular music, including Hank Thompson's "Humpty Dumpty Heart" (1948),[38] The Monkees' "All the King's Horses" (1966), Aretha Franklin's "All the King's Horses" (1972).[39] and Travis's "The Humpty Dumpty Love Song" (2001).[40] In jazz, Ornette Coleman and Chick Corea wrote different compositions, both incidentally titled Humpty Dumpty (in Corea's case, however, it is a part of a concept album inspired by Lewis Carroll, called "The Mad Hatter", 1978).[41][unreliable source?][42][unreliable source?]

In the Dolly Parton song Starting Over Again, it's all the king's horses and all the king's men who can't put the divorced couple back together again.[43] In an extra verse in one version of ABBA:s On and On and On Humpty Dumpty being afraid of falling off the wall is also mentioned.[44]

Humpty Dumpty has been used to demonstrate the second law of thermodynamics. The law describes a process known as entropy, a measure of the number of specific ways in which a system may be arranged, often taken to be a measure of "disorder". The higher the entropy, the higher the disorder. After his fall, and subsequent shattering, the inability to put him together again is representative of this principle, as it would be highly unlikely, though not impossible, to return him to his earlier state of lower entropy, as the entropy of an isolated system never decreases.[45][46][47]

A variation on the poem, using near-sounding French nonsense words, is often used to illustrate the difficulty of speech recognition in different languages. A common version is as follows:

To a listener expecting a nursery rhyme, it will generally be heard as the English version while someone expecting French will instead tend to hear nonsense words. [48]