Humulus, hop, is a small genus of flowering plants in the family Cannabaceae. The hop is native to temperate regions of the Northern Hemisphere. Hops are the female flowers (seed cones, strobiles) of the hop species H. lupulus; as a main flavor ingredient in beer, H. lupulus is widely cultivated for use by the brewing industry.

Although frequently referred to as the hops "vine", it is technically a bine; unlike vines, which use tendrils, suckers, and other appendages for attaching themselves, bines have stout stems with stiff hairs to aid in climbing. It is a perennial herbaceous plant which sends up new shoots in early spring and dies back to the cold-hardy rhizome in autumn. Hop shoots grow very rapidly, and at the peak of growth can grow 20 to 50 centimetres (8 to 20 in) per week. Hop bines climb by wrapping clockwise (except for Humulus japonicus) around anything within reach, and individual bines typically grow between 2 to 15 metres (7 to 50 ft) depending on what is available to grow on. The leaves are opposite, with a 7 to 12 cm (2.8 to 4.7 in) leafstalk and a heart-shaped, fan-lobed blade 12 to 25 cm (4.7 to 9.8 in) long and broad; the edges are coarsely toothed. When the hop bines run out of material to climb, horizontal shoots sprout between the leaves of the main stem to form a network of stems wound round each other.

Male and female flowers of the hop plant develop on separate plants (dioecious). Female plants, which produce the hop flowers used in brewing beer, are often propagated vegetatively and grown in the absence of male plants. This prevents pollination and the development of viable seeds, which are sometimes considered undesirable for brewing beer owing to the potential for off-flavors arising from the introduction of fatty acids from the seeds.[1] 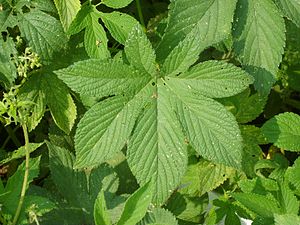 There are three species, one with five varieties:

Hops are boiled with the wort in brewing beer and sometimes added post-ferment; they impart a bitterness, flavor, as well as aroma to the finished product.[citation needed]

In pharmacy lupulus is the designation of hop. The dried catkins, commonly referred to as hop cones, of the female plant of H. lupulus are used to prepare infusion of hop, tincture of hop, and extract of hop.[3]

The characteristic bitterness imparted by the addition of hops to the brewing process is mainly due to the presence of the bitter acids, which are prenylated acylphloroglucinol derivatives.[4] Bitter acids are divided into the alpha-acids, with humulone the major compound, and the beta-acids, with lupulone the major compound;[citation needed] the alpha-acids isomerize during the brewing process to form iso-alpha acids, which themselves have a bitter taste.[5][non-primary source needed] These hop acids are vinylogous acids, with acidic ring enols in conjugation with ring and substituent carbonyl groups.[citation needed]

Plants in the genus Humulus produce terpenophenolic metabolites.[6] Hops also contain xanthohumol, a prenylated chalcone, and other compounds under preliminary research for their potential health properties.[7]