From Infogalactic: the planetary knowledge core
Jump to: navigation, search
Not to be confused with Henan Province.

Húnán; Hunanese: Shuangfeng, [ɣəu˩˧læ̃˩˧]; Changsha, [fu˩˧lã˩˧] ) is a province of the People's Republic of China. It is located in South Central China, south of the middle course of the Yangtze River, and south of Lake Dongting (hence the name Hunan, which means "south of the lake").[4] Hunan is sometimes called for short and officially abbreviated as "湘" (pinyin: Xiāng),[5] after the Xiang River which runs through the province.

Hunan's primeval forests were first occupied by the ancestors of the modern Miao, Tujia, Dong and Yao peoples. It entered the written history of China around 350 BC, when under the kings of the Zhou Dynasty, it became part of the State of Chu. After Qin conquered the Chu heartland in 278 BC, the region came under the control of Qin, and then the Han dynasty. At this time, and for hundreds of years thereafter, it was a magnet for migration of Han Chinese from the north, who displaced or assimilated the indigenous people, cleared forests and began farming rice in the valleys and plains.[6] The agricultural colonization of the lowlands was carried out in part by the Han state, which managed river dikes to protect farmland from floods.[7] To this day many of the small villages in Hunan are named after the Han families who settled there. Migration from the north was especially prevalent during the Eastern Jin Dynasty and the Southern and Northern Dynasties Periods, when nomadic invaders pushed these peoples south.

During the Five Dynasties and Ten Kingdoms Period, Hunan was home to its own independent regime, Ma Chu.

Hunan and Hubei became a part of the province of Huguang (湖廣) until the Qing dynasty. Hunan province was created in 1664 from Huguang, renamed to its current name in 1723.

Western Han painting on silk was found draped over the coffin in the grave of Lady Dai (c. 168 BC) at Mawangdui near Changsha in Hunan province.

Hunan became an important communications center due to its position on the Yangzi River. It was an important centre of scholarly activity and Confucian thought, particularly in the Yuelu Academy in Changsha. It was also on the Imperial Highway constructed between northern and southern China. The land produced grain so abundantly that it fed many parts of China with its surpluses. The population continued to climb until, by the nineteenth century, Hunan became overcrowded and prone to peasant uprisings. Some of the uprisings, such as the ten-year Miao Rebellion of 1795–1806, were caused by ethnic tensions. The Taiping Rebellion began in the south in Guangxi Province in 1850. The rebellion spread into Hunan and then further eastward along the Yangzi River valley. Ultimately, it was a Hunanese army under Zeng Guofan who marched into Nanjing to put down the uprising in 1864.

Hunan was relatively quiet until 1910 when there were uprisings against the crumbling Qing dynasty, which were followed by the Communist's Autumn Harvest Uprising of 1927. It was led by Hunanese native Mao Zedong, and established a short-lived Hunan Soviet in 1927. The Communists maintained a guerrilla army in the mountains along the Hunan-Jiangxi border until 1934. Under pressure from the Nationalist Kuomintang (KMT) forces, they began the Long March to bases in Shaanxi Province. After the departure of the Communists, the KMT army fought against the Japanese in the second Sino-Japanese war. They defended the Changsha until it fell in 1944. Japan launched Operation Ichigo, a plan to control the railroad from Wuchang to Guangzhou (Yuehan Railway). Hunan was relatively unscathed by the civil war that followed the defeat of the Japanese in 1945. In 1949, the Communists returned once more as the Nationalists retreated southward.

As Mao Zedong's home province, Hunan supported the Cultural Revolution of 1966–1976. However, it was slower than most provinces in adopting the reforms implemented by Deng Xiaoping in the years that followed Mao's death in 1976. 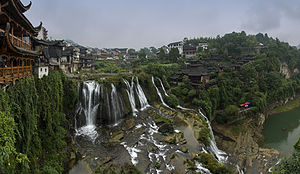 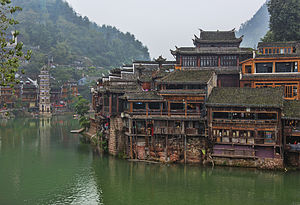 Lake Dongting is the largest lake in the province and the second largest freshwater lake of China.

Hunan's climate is subtropical, and, under the Köppen climate classification, is classified as being humid subtropical (Köppen Cfa), with short, cool, damp winters, very hot and humid summers, and plenty of rainfall. January temperatures average 3 to 8 °C (37 to 46 °F) while July temperatures average around 27 to 30 °C (81 to 86 °F). Average annual precipitation is 1,200 to 1,700 millimetres (47 to 67 in).

Main articles: Politics of Hunan and List of provincial leaders of the People's Republic of China

The politics of Hunan is structured in a dual party-government system like all other governing institutions in mainland China.

The Governor of Hunan is the highest-ranking official in the People's Government of Hunan. However, in the province's dual party-government governing system, the Governor has less power than the Hunan Communist Party of China Provincial Committee Secretary, colloquially termed the "Hunan CPC Party Chief".

The Lengshuijiang area is noted for its stibnite mines, and is one of the major centers of antimony extraction in China.[citation needed]

Hunan is also well known for a few international makers of construction equipments such as concrete pumps, cranes, etc. These companies include Sany Group, Zoomlion and Sunward. Sany is one of the major players in the world. Liuyang is the major maker of fireworks in the world. [14] [15]

The Changsha National Economic and Technology Development Zone was founded in 1992. It is located east of Changsha. The total planned area is 38.6 km2 (14.9 sq mi) and the current area is 14 km2 (5.4 sq mi). Near the zone is National Highways G319 and G107 as well as Jingzhu Highway. Besides that, it is very close to the downtown and the railway station. The distance between the zone and the airport is 8 km (5.0 mi). The major industries in the zone include high-tech industry, biology project technology and new material industry.[17]

Approved by the State Council, Chenzhou Export processing Zone (CEPZ) was established in 2005 and is the only export processing zone in Hunan province. The scheduled production area of CEPZ covers 3km2. The industrial positioning of CEPZ is to concentrate on developing export-oriented hi-tech industries, including electronic information, precision machinery, and new-type materials. The zone has good infrastructure, and the enterprises inside could enjoy the preferential policies of tax-exemption, tax-guarantee and tax-refunding. By the end of the “Eleventh Five-Year Plan”, the CEPZ achieved a total export and import volume of over US$1 billion and provided more than 50,000 jobs. It aimed to be one of the first-class export processing zones in China.[18]

Zhuzhou Hi-Tech Industrial Development Zone was founded in 1992. Its total planned area is 35 km2 (14 sq mi). It is very close to National Highway G320. The major industries in the zone include biotechnology, food processing and heavy industry. In 2007, the park signed a cooperation contract with Beijing Automobile Industry, one of the largest auto makers in China, which will set up a manufacturing base in Zhuzhou HTP.[19] 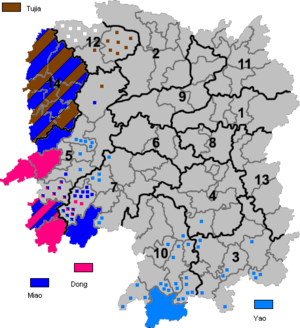 In Hunan, ethnic minority languages are spoken in the following prefectures.

Around 5,000 Uyghurs live around Taoyuan County and other parts of Changde.[20][21][22][23] Hui and Uyghurs have intermarried in this area.[24][25][26] In addition to eating pork, the Uygurs of Changde practice other Han Chinese customs, like ancestor worship at graves. Some Uyghurs from Xinjiang visit the Hunan Uyghurs out of curiosity or interest.[27] Also, the Uyghurs of Hunan do not speak the Uyghur language, instead, they speak Chinese as their native language.[28]

An ancestral shrine in the province.

Xiang Chinese(湘語) is the biggest native language to Hunan province, and it is also a group of Chinese dialects spoken in most parts of Hunan and in a few adjacent areas.

Hunanese cuisine is noted for its use of chili peppers.

Nü shu is a writing system that was used exclusively among women in Jiangyong County.

Hunan's culture industry generated 87 billion yuan (US$11.76 billion) in economic value in 2007,[30] a major contributor to the province's economic growth. The industry accounts for 7.5 percent of the region's GDP - 0.9 percentage points higher than the previous year.[citation needed]

Located in the south central part of the Chinese mainland, Hunan has long been known for its natural beauty. It is surrounded by mountains on the east, west, and south, and by the Yangtze River on the north. Its mixture of mountains and water makes it among the most beautiful provinces in China. For thousands of years, the region has been a major center of agriculture, growing rice, tea, and oranges. China's first all glass suspension bridge was also opened in Hunan, in Shiniuzhai National Geological Park.[31] 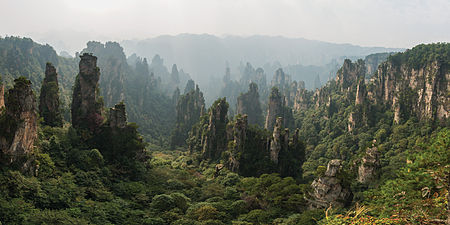 Professional sports teams in Hunan include: