Pope Leo X called Croatia the Antemurale Christianitatis in 1519,[6] given that Croatian soldiers made significant contributions to the struggle against the Turks. The advancement of the Ottoman Empire in Europe was stopped in 1593 on Croatian soil (Battle of Sisak), which could be in this sense regarded as a historical gate of European civilization. Nevertheless the Muslim Ottoman Empire occupied parts of Croatia from the 16th to the end of the 17th century.

According to the other group of historians, the war lasted from the second half of the 15th century and into the entire 16th century.[8]

A third group of historians mark the Peace of Zsitvatorok in 1606 as the end of the war. The war was won by the Ottoman's defeat upon their advance on the Kupa river border, with the remainder of Croatia's territory consisting of only 16,800 km².[9]

In light of the human and territorial loss, and also from the modern Croatian Romanticist point of view, the 15th and 16th centuries were known as the "Two centuries of Croatia in mourning" (Latin: Plorantis Croatiae saecula duo carmine descripta) in the lyric-epic poem of Pavao Ritter Vitezović from 1703.[10]

By the end of 1540, the Ottoman Empire occupied the Croatian possessions between Skradin and Karin, eliminating them as a buffer zone between the Ottoman and Venetian territory in Dalmatia.[12] By 1573, the remainder of the Dalmatian hinterland, now largely controlled by the Venetian cities, was even further reduced by Ottoman advances.[13] 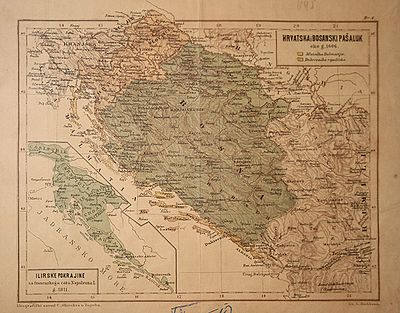 Kingdom of Croatia (pale brown), Republic of Dubrovnik (yellow), possession of Republic of Venice on Croatian coast (orange), and Ottoman Empire's Pashalik of Bosnia (green) in 1606.

Although the Croatian Kingdom suffered major defeats in battles, it remained in existence, keeping its identity, religion and culture under the Habsburg Monarchy. In addition, some Croats in the territories lost to the Ottomans remained because the Porte embraced ethnic diversity, many of them eventually converting to Islam throughout the following centuries of Ottoman rule.

The Croatian combat against the Ottomans did not remain unnoticed in the political circles of European states. Copious amounts of information from the war was written in Monumenta Hungariae Historica, Codex diplomaticus partium Regno Hungariae adnexarum from 1903 (over 600 documents).

During those 100 years (or 150 years, depending on criteria), the war on the territory of Kingdom of Croatia was overall a series of smaller armed conflicts ("small war") over the long duration of the war (in other words, armies were not always in constant battle.)

The Ottoman tactic consisted of persistent loot and scorching raids whose aim was to intimidate and demoralize the local civil inhabitants, to exhaust the economic opportunities and disable the normal economic life on the frontier areas. On the other side, Croatian and allied Christian forces implemented counterattacks, especially in the first phases of war, when they were still able to apply the counterattacking or the offensive tactics. Despite these destructive tactics, the armies did sometimes clash. Sometimes the local armies intercepted or pursued the raiders in their return from the raid. There was also more intense military actions, such as the Battle of Krbava Field or the Battle of Sisak.

The war-endangered areas can be classified in three zones:

The first zone was the territory of Kingdom of Croatia, that had no effective control by both sides, as well as the parts of Kingdom of Croatia that were heavily struck by the Ottoman military and paramilitary operations. This zone was up to 50 km deep in the Croatian territory. It mostly covered the areas along the border and the later-formed Military Frontier. The infrastructure and the supra-structure became ruined and devastated, and the economic life suffered. This zone had high rate of emigration, mostly to the second and the third zones, along with emigrations abroad.

The second zone was from time to time exposed to the raids of the Ottoman regular and irregular forces. The area was controlled by the Croatian authorities and the economic life was still somewhat functioning. Population level was steady and received a continuous inflow of displacees from the first zone. The Croatian nobles used this zone as the support point and the base for the defense or for the attempts of retaking of their estates in the first zone. These areas lived as economic support of the armies.