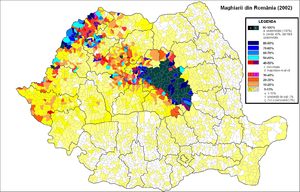 Hungarians in Romania (2002 census), by cities and communes

The Hungarian minority of Romania is the largest ethnic minority in Romania, consisting of 1,227,623 people and making up 6.5% of the total population, according to the 2011 census.[1]

Most ethnic Hungarians of Romania live in areas that were, before the 1920 Treaty of Trianon, parts of Hungary. These areas are today known as Transylvania[citation needed], where Hungarians make up 18.9% of the population.[1] The region also includes the historic regions of Banat, Crișana and Maramureș. There are forty-one counties of Romania; Hungarians form a large majority of the population in the counties of Harghita (85.21%) and Covasna (73.74%), and a large percentage in Mureș (38.09%), Satu Mare (34.65%), Bihor (25.27%), Sălaj (23.35%) and Cluj (15.93%) counties. 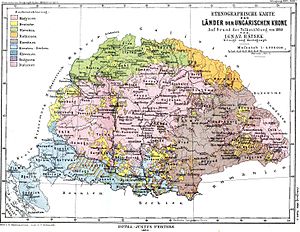 Distribution of nationalities within the Kingdom of Hungary, according to the 1880 census (based on mother tongue interpreted as the language one was most comfortable using[2][3]).

Magyar (or Hungarian) tribes originated in what is now Russia, arrived in the territory occupied by present-day Romania during the 9th century, in an area called Etelköz or Atelkuzu (roughly the space occupied by the present day Southern Ukraine, the Republic of Moldova and the Romanian province of Moldavia).[4] Due to various circumstances (see Honfoglalás), the Magyar tribes crossed the Carpathians around 895 AD and occupied the Carpathian Basin (including present-day Transylvania) without significant resistance from the local populace.[5] The precise date of the conquest of Transylvania is not known; the earliest Magyar artifacts found in the region are dated to the first half of the 10th century. While the Kingdom of Hungary emerged around 1000 AD the conquest of Transylvania was not completed until the late 12th century.

After quashing the 1848 revolution, the Habsburg Empire imposed a repressive regime on Hungary and ruled Transylvania directly through a military governor. Habsburgs abolished the Unio Trium Nationum and granted citizenship to ethnic Romanians. However, in the compromise (Ausgleich) of 1867, which established the Austro-Hungarian Empire, the special status of Transylvania ended and it became a province under the control of the Kingdom of Hungary. Hungarian becomes the official language and a policy of Magyarization was applied to the various ethnic groups in Transylvania.

With the conclusion of World War I, the Treaty of Versailles, formally signed in June 1919, recognized the sovereignty of Kingdom of Romania over Transylvania as a historic fact. The Treaties of St. Germain (1919) and Trianon (signed on June 1920) further elaborated the status of Transylvania and defined the new border between the states of Hungary and Romania. As a result, the more than 1.5 million-strong Hungarian minority of Transylvania found itself becoming a minority group within Romania.[9] The Hungarian language was expunged from official life and the new authorities institute a policy of Romanianization.

In August 1940, during the Second World War, the northern half of Transylvania was annexed to Hungary by the second Second Vienna Award. Historian Keith Hitchins[10] summarizes the situation created by the award: Some 1,150,000 to 1,300,000 Romanians, or 48 per cent to over 50 per cent of the population of the ceded territory, depending upon whose statistics are used, remained north of the new frontier, while about 500,000 Hungarians (other Hungarian estimates go as high as 800,000, Romanian as low as 363,000) continued to reside in the south.

The Treaty of Paris (1947) after the end of the Second World War overturned the Vienna Award, and the territory of northern Transylvania was returned to Romania. The post-WWII borders with Hungary agreed on at the Treaty of Paris were identical with those set out in 1920.

After the war, in 1952, a Magyar Autonomous Region was created in Romania by the communist authorities. The region was dissolved in 1968, when a new administrative organization of the country (still in effect today) replaced regions with counties. The communist authorities, and especially after Nicolae Ceaușescu's regime came to power, restarted the policy of Romanianization. 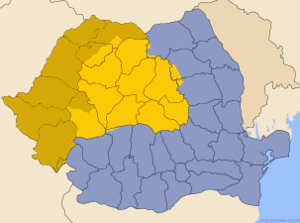 Map of Romania with "Transylvania proper" in bright yellow

Today, "Transylvania proper" (bright yellow on the accompanying map) is included within the Romanian counties (județe) of Alba, Bistrița-Năsăud, Brașov, Cluj, Covasna, Harghita, Hunedoara, Mureș, Sălaj (partially) and Sibiu. In addition to "Transylvania proper", modern Transylvania includes Crișana and part of the Banat; these regions (dark yellow on the map) are in the counties of Arad, Bihor, Caraș-Severin, Maramureș, Sălaj (partially), Satu Mare, and Timiș. 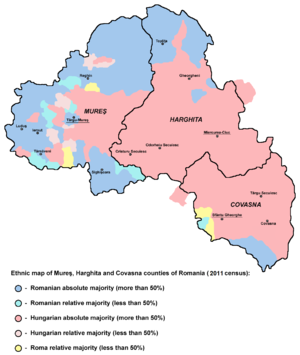 Ethnic map of Harghita, Covasna, and Mureș Counties based on the 2011 data, showing localities with Hungarian majority or plurality.

In the aftermath of the Romanian Revolution of 1989, ethnic-based political parties were constituted by both the Hungarians, who founded the Democratic Union of Hungarians in Romania, and by the Romanian Transylvanians, who founded the Romanian National Unity Party. Ethnic conflicts, however, never occurred on a significant scale, even though some violent clashes, such as the Târgu Mureș events of March 1990, did take place shortly after the fall of Ceaușescu regime.

In 1995, a basic treaty on the relations between Hungary and Romania was signed. In the treaty, Hungary renounced all territorial claims to Transylvania, and Romania reiterated its respect for the rights of its minorities. Relations between the two countries improved as Romania and Hungary became EU members in the 2000s.

The Democratic Union of Hungarians in Romania (UDMR) is the major representative of Hungarians in Romania, and is a member of the Unrepresented Nations and Peoples Organization. The aim of the UDMR is to achieve local government, cultural and territorial autonomy and the right to self-determination for Hungarians. UDMR is a member of the European Democrat Union (EDU) and the European People's Party (EPP). Since 1996, the UDMR has been a member or supporter of every governmental coalition.

Political agreements have brought the gradual implementation of Hungarian language in everyday life: Public administration Law 215/2002 stipulates "the use of national minority languages in public administration in settlements where minorities exceed 20% of the population"; minority ethnics will receive a copy of the documents in Romanian language and a translation in their language; however, official documents are preserved by the local administration in Romanian only; local administration will provide inscriptions for the names of localities and public institutions under their authority, and display public interest announcements in the native language of the citizens of the respective ethnic minority under the same 20% rule.

Even though Romania co-signed the European laws for protecting minorities' rights, the implementation has not proved satisfactory to all members of Hungarian community. There is a movement by Hungarians both for an increase in autonomy and distinct cultural development. Initiatives proposed by various Hungarian political organizations include the creation of an "autonomous region" in the counties that form the Szekler region (Székelyföld), roughly corresponding to the territory of the former Hungarian Autonomous Province as well as the historical Szekler land that had been abolished by the Hungarian government in the second half of the 19th century, and the re-establishment of an independent state-funded Hungarian-language university.

However, the situation of the Hungarian minority in Romania has been seen as a model of cultural and ethnic diversity in the Balkan area:[11] In an address to the American people, President Clinton asked in the midst of the air war in Kosovo: Who is going to define the future of this part the world... Slobodan Milošević, with his propaganda machine and paramilitary forces which compel people to give up their country, identity, and property, or a state like Romania which has built a democracy respecting the rights of ethnic minorities?[12]

The Székely people are Hungarians who mainly live in an area known as Székely Land (Ținutul Secuiesc in Romanian), and who maintain a different set of traditions and different identity from that of other Hungarians in Romania. Based on the latest Romanian statistics (2011 Romanian census, the Hungarian population in the counties of Harghita, Covasna and Mures is 611,391, which is roughly indicative of the total Szekely population in Romania.[39]

The Csángó (Romanian: Ceangău, pl. Ceangăi) are people of Roman Catholic faith, some speaking a Hungarian dialect and some Romanian. They live mainly in the Bacău County, Moldavia region. The Csángó settled there between the 13th and 15th centuries and today, they are the only Hungarian-speaking ethnic group living to the east of the Carpathians.[citation needed]

The ethnic background of Csángó/Ceangăi is nevertheless disputed, since, due to its active connections to the neighboring Polish kingdom and to the Papal States, the Roman Catholic faith persisted in Moldavia throughout medieval times, long after Vlachs living in other Romanian provinces, closer to the Bulgarian Empire, had been completely converted to Eastern-Rite Christianity. Some Csángó/Ceangăi claim having Hungarian ancestry while others claim Romanian ancestry. The Hungarian-speaking Csángós have been subject to some violations of basic minority rights: Hungarian-language schools have been closed down over time, their political rights have been suppressed and they have even been subject to slow, forced nationalisation by various Romanian governments over the years, because the Romanian official institutions deem Csángós as a mere Romanian population that was Magyarized in certain periods of time.[citation needed]

The number of Hungarian social and cultural organizations in Romania has greatly increased after the fall of communism, with more than 300 being documented a few years ago.[citation needed] There are also several puppet theatres.[citation needed] Professional Hungarian dancing in Romania is represented by the Maros Folk Ensemble (formerly State Szekler Ensemble) in Târgu-Mureș, the Hargita Ensemble, and the Pipacsok Dance Ensemble.[citation needed] Other amateur popular theaters are also very important in preserving the cultural traditions.[citation needed]

While in the past the import of books was hindered, now there are many bookstores selling books written in Hungarian. Two public TV stations, TVR1 and TVR2, broadcast several Hungarian programs with good audiences also from Romanians.[citation needed] This relative scarcity is partially compensated by private Hungarian-language television and radio stations, like DUNA-TV which is targeted for the Hungarian minorities outside Hungary, particularly Transylvania. A new TV station entitled "Transylvania" is scheduled to start soon, the project is funded mostly by Hungary but also by Romania and EU and other private associations. There are currently around 60 Hungarian-language press publications receiving state support from the Romanian Government. While their numbers dropped as a consequence of economic liberalisation and competition, there are many others private funded by different Hungarian organizations. The Székely Region has many touristic facilities that attract Hungarian and other foreign tourists.

According to the official data of the 1992 Romanian census, 98% of the total ethnic Hungarian population over the age of 12 has had some schooling (primary, secondary or tertiary), ranking them fourth among ethnic groups in Romania and higher than the national average of 95.3%. On the other hand, the ratio of Hungarians graduating from higher education is lower than the national average. The reasons are diverse, including a lack of enough native-language lecturers, particularly in areas without a significant proportion of Hungarians.

Many Hungarians living in Transylvania were disconcerted when the referendum held in Hungary in 2004 on the issue of giving dual-citizenship to ethnic Hungarians living abroad failed to receive enough electoral attendance and the vote was uncertain. Some of them complain that when they are in Hungary, they are perceived as half-Romanians, and are considered as having differences in language and behaviour. However, a large proportion of Transylvanian Hungarians currently work or study in Hungary, usually on a temporary basis. After 1996, Hungarian-Romanian economic relations boomed, and Hungary is an important investor in Transylvania, with many cross-border firms employing both Romanians and Hungarians.[citation needed]

A proposal supported by the RMDSZ to grant Hungarian citizenship to Hungarians living in Romania but without meeting Hungarian-law residency requirements was narrowly defeated at a 2004 referendum in Hungary (the referendum failed only because there were not enough votes to make it valid).[40] After the failed vote, the leaders of the Hungarian ethnic parties in the neighboring countries formed the HTMSZF organization in January 2005, as an instrument lobbying for preferential treatment in the granting of Hungarian citizenship.[41]

The remaining 4,973 ethnic Hungarians live in the other counties of Romania, where they make up less than 0.1% of the total population.