The Hunger Plan (German: der Hungerplan; der Backe-Plan) was a scheme implemented by Nazi Germany during World War II that envisioned death by starvation of millions of Slavic and Jewish "useless eaters" following Operation Barbarossa, the 1941 invasion of the Soviet Union. This plan was developed during the planning phase for the Wehrmacht (German Armed Forces) invasion and provided for diverting of the Ukrainian food stuffs away from central and northern Russia and redirecting them for the benefit of the invading army and the population in Germany. The premise behind the Hunger Plan was that Germany was not self-sufficient in food supplies, and to sustain the war and keep up the domestic morale it needed to obtain the food from conquered lands at any cost. It was an engineered famine, planned and implemented as an act of policy. The plan resulted in the deaths of millions of people.[1] The plan as a means of mass murder was outlined in several documents, including one that became known as Göring's Green Folder, which quoted a number of "20 to 30 million" expected Soviet deaths.

Outline of the plan 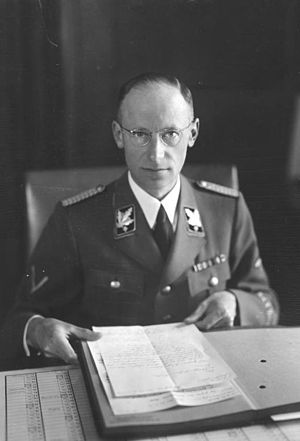 The architect of the Hunger Plan was Herbert Backe.[2] Together with others, such as Heinrich Himmler, Backe led a coalition of Nazi politicians, dedicated to securing Germany's food supply. The Hunger Plan may have been decided on almost as soon as Hitler announced his intention to invade the Soviet Union in December 1940. Certainly by 2 May 1941, it was in the advanced stages of planning and was ready for discussion between all the major Nazi state ministries and the Oberkommando der Wehrmacht (OKW) office of economics, headed by General Georg Thomas.[3] The lack of capacity of the Russian railways, the inadequacy of road transport and the shortages of fuel, meant that the German Army would have to feed itself by living off the land in the territories they conquered in the western regions of the Soviet Union.[4] A meeting on 2 May 1941 between the permanent secretaries responsible for logistical planning for the invasion of the Soviet Union, as well as other high-ranking NSDAP functionaries, state officials and military officers, included in its conclusions:

1.) The war can only be continued if the entire Wehrmacht is fed from Russia in the third year of the war.

2.) If we take what we need out of the country, there can be no doubt that tens of millions of people will die of starvation.[5]

The minutes of the meeting exemplify German planning for the occupation of the Soviet Union. They present a deliberate decision on the life or death of vast parts of the local population as a logical, inevitable development.[6] Three weeks later, on 23 May 1941, economic policy guidelines for the coming invasion appeared that had been produced by Hans-Joachim Riecke's agricultural section of the Economic Staff East, which had direct responsibility for the economic and agricultural exploitation of the soon-to-be occupied Soviet territories:

Many tens of millions of people in this country will become superfluous and will die or must emigrate to Siberia. Attempts to rescue the population there from death through starvation by obtaining surpluses from the black earth zone […] prevent the possibility of Germany holding out till the end of the war.[7]

The perceived grain surpluses of Ukraine figured particularly prominently in the vision of a "self-sufficient" Germany. Hitler himself had stated in August 1939 that Germany needed "the Ukraine, in order that no one is able to starve us again as in the last war."[8]:56 Yet Ukraine did not produce enough grain for export to solve Germany's problems.[9] Scooping off the agricultural surplus in Ukraine for the purpose of feeding the Reich called for:

In the discussion of the plan, Backe noted a "surplus population" in Russia of about 20 to 30 million. If that population was cut off from food, that food could be used to feed both the invading German Army and the German population itself. Industrialization had created a large urban society in the Soviet Union. The Backe plan envisioned that this population, numbering many millions, would be cut off from their food supply, thus freeing up the food produced in the Soviet Union, now at Germany's disposal, to sustain Germans. As a result, great suffering among the native Soviet population was envisaged, with tens of millions of deaths expected within the first year of the German occupation. Starvation was to be an integral part of the German Army's campaign. Planning for starvation preceded the invasion and became in fact an essential condition of it; the German planners believed that the assault on the Soviet Union could not succeed without it.[12] According to Gesine Gerhard, German agricultural officials saw the Hunger Plan as a solution to both the European food crisis and a method for exterminating the "undesirable" Soviet population.[13]:46

Effects of the plan

The Hunger Plan caused the deaths of millions of citizens in the German-occupied territories of the Soviet Union. The historian Timothy Snyder estimates that “4.2 million Soviet citizens (largely Russians, Belarusians, and Ukrainians) [were] starved by the German occupiers in 1941-1944.”[14] Among the victims were many Jews, whom the Nazis had forced into ghettos, and Soviet prisoners of war, whose movement was most easily controlled by the Germans and thus easily cut off from food supplies.[15] Jews, for example, were prohibited from purchasing eggs, butter, milk, meat or fruit.[16] The so-called "rations" for Jews in Minsk and other cities within the control of Army Group Center were no more than 420 calories (1,800 kJ) per day. Tens of thousands of Jews died of hunger and hunger-related causes over the winter of 1941-1942.[17] 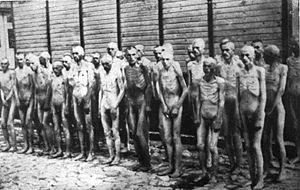 The most reliable figures for the death rate among Soviet prisoners of war in German captivity reveal that 3.3 million died from a total of 5.7 million captured between June 1941 and February 1945, most directly or indirectly as a result of starvation and undernourishment.[18] Of these 3.3 million, 2 million had already died by the beginning of February 1942.[19] The enormous number of deaths was the result of a deliberate policy of starvation directed against Soviet POWs. The German planning staffs had reckoned on capturing and thus having to feed up to two million prisoners within the first eight weeks of the war, i.e. roughly the same number as during the 1940 campaign against France and the Low Countries.[20] The number of French, Belgian and Dutch POWs who died in German captivity, however, was extremely low compared with the number of deaths among Soviet POWs.

In spite of the exorbitantly high death rate among Soviet POWs, who constituted the main group of victims of the Hunger Plan, the plan was never fully implemented due to the ultimate failure of the German military campaign.[21] As the historian Alex J. Kay makes clear, however, "what one is dealing with here is the blueprint for a programme of mass murder unprecedented in modern history".[22] Except in isolated cases, the Germans lacked the manpower to enforce a 'food blockade' of the Soviet cities; neither could they confiscate all the food for their own purposes. However, the Germans were able to significantly supplement their grain stocks, particularly from the granaries in fertile Ukraine, and cut off the Soviets from them, leading to significant starvation in the Soviet-held territories (most drastically in Leningrad, encircled by German forces, where about one million people died).[23] The lack of food also contributed to the starvation of forced labourers and concentration camp inmates in Germany.

Starvation in other German-occupied territories

While the Hunger Plan against the population of Soviet cities and grain-deficit territories was unique in that no such premeditated plan was formulated against the inhabitants of any other German-occupied territory, starvation did affect other parts of German-occupied Europe, including Greece (Great Famine) and Poland (General Government). Unlike the Soviet Union, in Poland it was the Jewish population in ghettos (especially the Warsaw Ghetto) who suffered most heavily, although ethnic Poles also faced increasing levels of starvation. Raul Hilberg estimated that "in the whole of occupied Poland 500,000 to 600,000 Jews died in ghettos and labor camps," in part due to starvation.[24] In early 1943, Hans Frank, the German governor of Poland, estimated that three million Poles would be facing starvation as a result of the Plan. In August, the Polish capital Warsaw was completely cut off from grain deliveries. Only the above-average harvest of 1943 and the collapsing Eastern Front of 1944 saved the Poles from starvation. Western Europe was third on the German list of food re-prioritizing. Food was also shipped to Germany from France and other occupied territories in the West, although the West was never subjected to the genocidal starvation experienced in the East.[citation needed] As many as 22,000 people died during the Dutch famine of 1944 as a result of an embargo placed by the Germans on transporting food into the country.