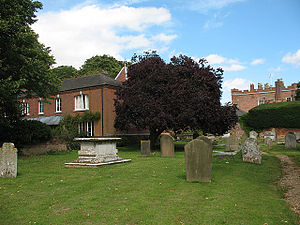 Hunsdon House, as seen from the adjacent churchyard. (West end of main house is on the right; service building on the left.)

Hunsdon House is a historic house in Hunsdon, Hertfordshire, England, northwest of Harlow. Originally constructed in the 15th century, it was most notably the estate of Henry VIII of England. It has been rebuilt several times since then, and is no longer as grand as it was in the Tudor era. It is a Grade I listed building. [1]

It was originally constructed of brick in 1447 by Sir William Oldhall in the shape of a tower, but as Oldhall supported the House of York during the Wars of the Roses, he was stripped of the property by the Lancastrian Henry VI. Upon the Yorkist Edward IV's accession to the throne in 1471, the land was returned to the Oldhall family. John Oldhall then died in the Battle of Bosworth and with the Lancastrians back in power, the estate was taken over by Henry VII.[2] Henry traded it to his mother Margaret Beaufort for Old Soar Manor in Kent in 1503.[3] After the deaths of Margaret and her husband Edmund Tudor, her son Henry VII gave it to Thomas Howard, 2nd Duke of Norfolk in 1514.[2] Howard's son reduced the height of the tower for safety reasons in 1524.[4] 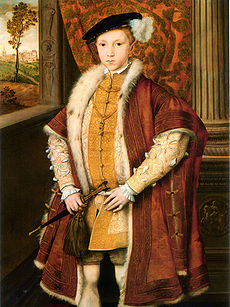 Portrait of Edward VI, with Hunsdon House in the background

When Henry VIII retook possession in 1525 after Howard's death, he set about expanding the house into a palatial estate in the Tudor style, complete with royal apartments and even a moat.[4] Although he visited frequently and enjoyed hunting in the deerpark,[5] the house was mainly used for his children, especially Mary, who lived there until her accession to the throne.[6] She even inherited the house after the death of her father and kept it until her death.[2] Prince Edward notably spent much time at Hunsdon, most famously in 1546 when his portrait was painted with the house in the background.[4] Elizabeth I made Henry Carey the first Baron Hunsdon, after first granting the house to him in 1559.[5]

In 1623, the house suffered a structural failure during a sermon given by a local friar to an audience of about 300 people in an upper chamber. The floor collapsed, resulting in 94 deaths. The incident was known as "The Fatal Vespers".[7]

The manor stayed in the Carey family for over 100 years, after which it passed to the Bluck family and then the Calvert family.[2] Much of Henry VIII's expansions were torn down in the early 17th century, and the moat was filled some time in the 18th century.[6] The house was rebuilt at the beginning of the 19th century, but 1860 renovations by Nicolson Calvert changed much of the architecture to an Elizabethan style.[2][8] One last renovation in 1983 revealed some of the 15th-century brickwork. The current house is less than a quarter of its size under Henry VIII.[4]