Huntersville is a town in Mecklenburg County, North Carolina, United States. A part of the Charlotte metropolitan area, the population was 46,773 at the 2010 census, which makes Huntersville the 19th largest municipality in North Carolina. It is located about 12 miles north of downtown Charlotte. It is thought that the town derives its name from the Rev. Humphrey Hunter, a minister at Steele Creek and Unity Presbyterian Churches and a local Revolutionary War hero. Others debate that it is named for Robert B. Hunter, a local cotton farmer.

Geography and the government

There were 9,171 households out of which 41.9% had children under the age of 18 living with them, 64.6% were married couples living together, 7.5% had a female householder with no husband present, and 25.2% were non-families. 19.2% of all households were made up of individuals and 3.4% had someone living alone who was 65 years of age or older. The average household size was 2.67 and the average family size was 3.09.

Despite the rapid growth and 9,171 households, and 6,859 families as of 2010, crime has been kept to a minimum. Residents consider the town a safe place to raise a family.

Huntersville is one of three towns (the others are Cornelius and Davidson) located north of Charlotte, North Carolina, but within the same county. These three towns make up the area known as "North Meck." Express bus transportation and an interstate with HOV lanes that ends five miles south of Huntersville provide access to the downtown business areas of Charlotte, making Huntersville primarily a town of commuters.

Two exits from Interstate 77 serve Huntersville. Exit 23 (Gilead Road) connects the expressway with the original town. Exit 25 (North Carolina Highway 73, but most often referred to as Sam Furr Road) provides access to the Birkdale Village area and shopping, medical, and office complexes that have been built since the exit opened.

The town is served by six weekly newspapers, including "The Lake Norman Citizen" and "The Herald Weekly".

The town also is known recreationally as a lake community because of its proximity to Lake Norman, a large man-made lake created by Duke Power to serve the nuclear power plant, and Mountain Island Lake, a smaller man-made lake that is used as Charlotte's city water source and located along the southwest border of Huntersville. The lakes attract both boaters and water-skiers from several surrounding states. Huntersville is also home to one private golf course, NorthStone Country Club; two Semi-Private courses in Skybrook Golf Club; and Birkdale Golf Course. These two courses are owned and operated by the IRI group and are a part of the 6-course Carolina Trail where package deals are available.

Huntersville is home to the annual Carolina Renaissance Festival, operating Saturdays and Sundays, in October and November. 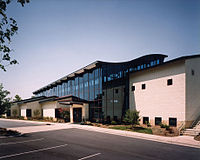 Huntersville and the surrounding area is served by the North County Regional branch of the Public Library of Charlotte and Mecklenburg County.[11] The library is located on Holly Crest Lane, just southeast of exit 25 on I-77, off of Sam Furr Road.