From Infogalactic: the planetary knowledge core
Jump to: navigation, search
"Huntingdon County" redirects here. It is not to be confused with Huntington County, Indiana.

Huntingdon County is a county located in the U.S. state of Pennsylvania. As of the 2010 census, the population was 45,913.[1] Its county seat is Huntingdon.[2] The county was created on September 20, 1787, from part of Bedford County.

Almost everyone that lives in Huntingdon County speaks English as their first language. The dominant form of speech in Huntingdon County is the Central Pennsylvania accent, although some areas of the county, such as Kishacoquillas Valley, where many Amish and Mennonite people live, German is commonly spoken. 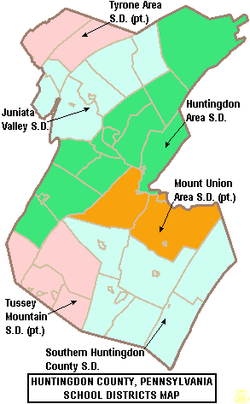 Interstate 76 (Pennsylvania Turnpike) cuts through a corner of Dublin Township, but no exits are located in the county. 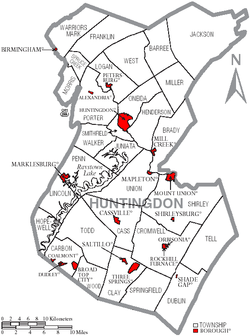 Under Pennsylvania law, there are four types of incorporated municipalities: cities, boroughs, townships, and, in at most two cases, towns. The following boroughs and townships are located in Huntingdon County: