From Infogalactic: the planetary knowledge core
Jump to: navigation, search
This article is about the Husqvarna Group. For other uses, see Husqvarna.

1689 - Rifle factory The drillingwork at the waterfalls in Huskvarna, southern Sweden, is the first large plant. The state-owned rifle factory had some 1,000 employees at the beginning of the 18th century. The company was spun off from Husqvarna Vapenfabriks Aktiebolag in 1959. Shot-guns were produced for 300 years, the last was produced in 1989.

1896 - Bicycles Bicycles is being produced in the Huskvarna factory. Several patents are registered. The last bicycle is produced in 1962.

1903 - Motorcycles The first motorcycle, which could reach the impressive speed of 4–5 km/hour, was produced in 1903. Starting in the 1930s, Husqvarna's lightweight engines helped make some successful track racing and motocross bikes. Husqvarna's first titles in Motocross World Championship came in 1959 and 1960. The operation was divested in 1987 and is since 2013 part of the KTM family.

1919 - Lawn mowers When Husqvarna acquired Norrahammars bruk, the product range expands to heating boilers and lawn mowers. The first test with a lawn mower powered by an engine was done in 1947.

1959 - Chainsaws As demand for bicycles, mopeds and motorcycles declines, forestry becomes increasingly important. The expertize in engines is now utilized in new areas and the first chainsaw is produced in 1959.

1968 - Power cutters A saw rebuilt to a power cutter in 1968 was the starting point of what today is the business area Husqvarna Construction.

2006 - On its own feet The company was spun off by Electrolux.

2007 - Acquisitions of strong brands The acquisition of Gardena in 2007 made the Husqvarna Group the European leader in consumer watering products. Acquiring Zenoah brought a strong brand and geographical expansion in Japan. 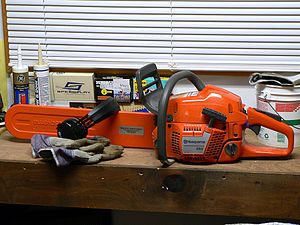