The Hyblaean Mountains (Italian: Monti Iblei)[1] are a mountain range in south-eastern Sicily, Italy. They are included in the provinces of Ragusa, Syracuse and Catania, and reaches the highest altitude with Monte Lauro, at 986 m.

The range is composed of white limestone rocks, characterized by Karst topography. The name derives from the Siculi king Hyblon, who gave a portion of his territory to Greek colonists to build the town of Megara Hyblaea. The rivers eroded the plateau, forming numerous and deep canyons. In the coastal area sandstone is also present, here called giuggiulena. In some areas, such as that of Monte Lauro (once part of submerged volcanic complex), volcanic rocks are also present.

The Hyblaean Mountains are characterized by gentle slopes, interrupted by sharp valleys. In the central area are numerous woods which are intermingled with the typical dry stone walls of south-eastern Sicily. The more populated coast has instead terraced hills, with Mediterranean vegetation, alternated to a plateau with huge cultivations of olive trees, vines, citrus fruit and almonds. Other grows include grain and maize.

Main attraction of the area include the Baroque towns of Ragusa, Modica and Palazzolo Acreide and the Necropolis of Pantalica and Cava Ispica.

The highest peaks of the Monti Iblei are: 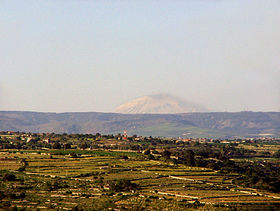 Panorama of the Hyblaean Mountains.

The range is drained by several rivers, which flow into either the Mediterranean sea or the Ionian sea.