Hyde County is a county located in the U.S. state of North Carolina. As of the 2010 census, the population was 5,810,[1] making it the second-least populous county in North Carolina. Its county seat is Swan Quarter.[2] The county was created in 1705 as Wickham Precinct. It was renamed Hyde Precinct in 1712 and gained county status in 1739.[3][4]

The county was formed December 3, 1705, as Wickham Precinct, one of three precincts within Bath County. The name "Wickham" was derived from the manor of "Temple Wycombe" in Buckinghamshire, United Kingdom, the family home of John Archdale, Governor of North and South Carolina from 1695 to 1696. In 1712 it was renamed Hyde Precinct, for Edward Hyde,[5] Governor of North Carolina from 1711 to 1712. In 1739 Bath County was abolished, and Hyde Precinct became Hyde County.

Hyde County is a member of the Albemarle Commission regional council of governments.

Hyde County is located within North Carolina's 3rd congressional district. In the 2008 Presidential election, the county was narrowly divided, much like the rest of the state of North Carolina, with Barack Obama winning 1,241 votes, John McCain winning 1,212 votes, and other candidates winning 16 votes.[13]

The only private school in Hyde County is a small Mennonite school located in the northwest section of the county. This school serves the county's Mennonite population.

Hyde County is home to two full power radio stations, WYND 97.1 FM and WCMS 94.5 FM. These stations are licensed to Hatteras, NC but maintain transmitter facilities outside of Engelhard.

WHYC 88.5 FM is located on the campus of Mattamuskeet School in Swan Quarter. WHYC is one of only two high school operated stations in North Carolina. 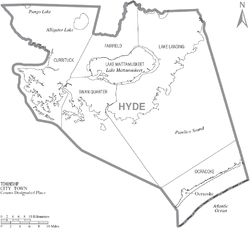 Hyde County has no incorporated municipalities.