Hyde Park is one of the largest parks in London, and one of the Royal Parks of London. The Park is the largest of four parks which form a chain from the entrance of Kensington Palace through Kensington Gardens and Hyde Park, via Hyde Park Corner and Green Park (19 hectares), past the main entrance to Buckingham Palace and then on through Saint James's Park (23 hectares) to Horse Guards Parade in Whitehall. The park is divided in two by the Serpentine and the Long Water.

The park is contiguous with Kensington Gardens; although often still assumed to be part of Hyde Park, Kensington Gardens has been technically separate since 1728, when Queen Caroline made a division between the two. Hyde Park covers 142 hectares (350 acres)[2] and Kensington Gardens covers 111 hectares (275 acres),[3] giving an overall area of 253 hectares (625 acres), making the combined area larger than the Principality of Monaco (196 hectares or 480 acres), though smaller than the Bois de Boulogne in Paris (845 hectares, or 2090 acres), New York City's Central Park (341 hectares or 840 acres), and Dublin's Phoenix Park (707 hectares, or 1,750 acres). To the southeast, outside the park, is Hyde Park Corner. Although, during daylight, the two parks merge seamlessly into each other, Kensington Gardens closes at dusk but Hyde Park remains open throughout the year from 5 a.m. until midnight.

The park was the site of the Great Exhibition of 1851, for which the Crystal Palace was designed by Joseph Paxton. The park has become a traditional location for mass demonstrations. The Chartists, the Reform League, the Suffragettes, and the Stop the War Coalition have all held protests in the park. Many protesters on the Liberty and Livelihood March in 2002 started their march from Hyde Park. On 20 July 1982 in the Hyde Park and Regents Park bombings, two bombs linked to the Provisional Irish Republican Army caused the death of eight members of the Household Cavalry and the Royal Green Jackets and seven horses.

Hyde Park was created in 1536 by Henry VIll for hunting.[4] He acquired the manor of Hyde from the canons of Westminster Abbey, who had held it since before the Norman Conquest;[5] it was enclosed as a deer park and remained a private hunting ground until James I permitted limited access to gentlefolk,[6] appointing a ranger to take charge. Charles I created the Ring (north of the present Serpentine boathouses), and in 1637 he opened the park to the general public.[7] 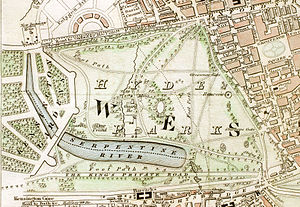 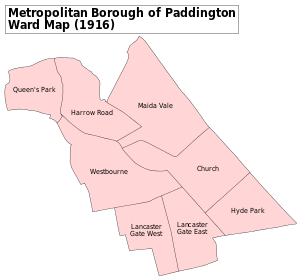 A map showing the Hyde Park ward of Paddington Metropolitan Borough as it appeared in 1916.

In 1689, when William III moved his residence to Kensington Palace on the far side of Hyde Park, he had a drive laid out across its south edge, formerly known as "The King's Private Road", which still exists as a wide straight gravelled carriage track leading west from Hyde Park Corner across the south boundary of Hyde Park towards Kensington Palace. The drive is now known as Rotten Row, possibly a corruption of rotteran (to muster),[8] Ratten Row (roundabout way), Route du roi, or rotten (the soft material with which the road is covered).[9] Public transport entering London from the west paralleled the King's private road along Kensington Gore, just outside the park. In the late 1800s, the row was used by the wealthy for horseback rides.[10]

The first coherent landscaping was undertaken by Charles Bridgeman for Queen Caroline;[11] under the supervision of Charles Withers, the Surveyor-General of Woods and Forests, who took some credit for it. It was completed in 1733 at a cost to the public purse of £20,000. Bridgeman's piece of water called The Serpentine, formed by damming the little Westbourne that flowed through the park, was not truly in the Serpentine "line of beauty" that William Hogarth described, but merely irregular on a modest curve. The 2nd Viscount Weymouth was made Ranger of Hyde Park in 1739 and shortly began digging the Serpentine lakes at Longleat.[12] The Serpentine is divided from the Long Water by a bridge designed by George Rennie (1826).

One of the most important events to take place in the park was the Great Exhibition of 1851. The Crystal Palace was constructed on the south side of the park. The public in general did not want the building to remain in the park after the closure of the exhibition, and the design architect, Joseph Paxton, raised funds and purchased it. He had it moved to Sydenham Hill in South London.[13]

Another significant event held in Hyde Park was the first Victoria Cross investiture, on 26 June 1857, when 62 men were decorated by Queen Victoria in the presence of Prince Albert and other members of the Royal Family, including their future son-in-law Crown Prince Frederick of Prussia, later Emperor Frederick III.[14] 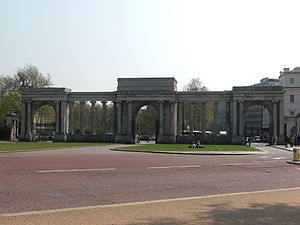 The Grand Entrance to Hyde Park

The Grand Entrance to the park, also known as Apsley Gate, at Hyde Park Corner next to Apsley House, was erected from the designs of Decimus Burton in 1824–25.[15] An early description reports:

"It consists of a screen of handsome fluted Ionic columns, with three carriage entrance archways, two foot entrances, a lodge, etc. The extent of the whole frontage is about 107 ft (33 m). The central entrance has a bold projection: the entablature is supported by four columns; and the volutes of the capitals of the outside column on each side of the gateway are formed in an angular direction, so as to exhibit two complete faces to view. The two side gateways, in their elevations, present two insulated Ionic columns, flanked by antae. All these entrances are finished by a blocking, the sides of the central one being decorated with a beautiful frieze, representing a naval and military triumphal procession. This frieze was designed by Mr. Henning, junior, the son of Mr. Henning who was well known for his models of the Elgin marbles. "The gates were manufactured by Messrs. Bramah. They are of iron, bronzed, and fixed or hung to the piers by rings of gun-metal. The design consists of a beautiful arrangement of the Greek honeysuckle ornament; the parts being well defined, and the raffles of the leaves brought out in a most extraordinary manner."[16] 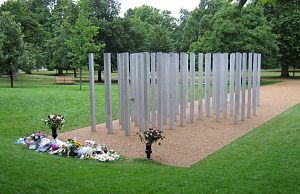 Sites of interest in the park include Speakers' Corner (located in the northeast corner near Marble Arch), close to the former site of the Tyburn gallows, and Rotten Row, which is the northern boundary of the site of the Crystal Palace. South of the Serpentine is the Diana, Princess of Wales memorial, an oval stone ring fountain opened on 6 July 2004. To the east of the Serpentine, just beyond the dam, is London's Holocaust Memorial. The 7 July Memorial in the park commemorates the victims of 7 July 2005 London bombings.

A botanical curiosity is the Weeping Beech, Fagus sylvatica pendula, cherished as "the upside-down tree". Opposite Hyde Park Corner stands one of the grandest hotels in London, The Lanesborough (Formerly—until the early 1970s—St George's Hospital). Stanhope Lodge (Decimus Burton, 1824–25) at Stanhope Gate,[17] demolished to widen Park Lane, was the home of Samuel Parkes who won the Victoria Cross in the Charge of the Light Brigade. After leaving the army, Parkes became inspector of the park's constables, and died in the lodge on 14 November 1864. A rose garden, designed by Colvin & Moggridge Landscape Architects, was added in 1994.[18]

An assortment of unusual sculptures are scattered around the park, including Drinking Horse, made in the shape of a massive horse head lapping up water, a family of Jelly Babies standing on top of a large black cube, and Vroom Vroom,[19] which resembles a giant human hand pushing a toy car along the ground. 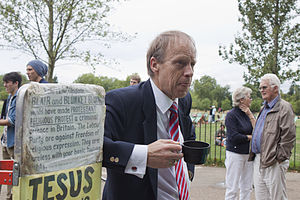 A Protestant Christian protesting at Speakers' Corner in 2010

Hyde Park's Speakers' Corner has acquired an international reputation for demonstrations and other protests[20] due to its tolerance of free speech.[21] In 1855, a protest at the park was organised to demonstrate against Robert Grosvenor's attempt to ban Sunday trading, including a restriction on pub opening times. Karl Marx observed approximately 200,000 protesters attended the demonstration, which involved jeering and taunting at upper-class horse carriages. A further protest occurred a week later, but this time the police attacked the crowd.[22]

In 1867 the policing of the park was entrusted to the Metropolitan Police, the only royal park so managed, due to the potential for trouble at Speakers' Corner. A Metropolitan Police station ('AH') is situated in the middle of the park. The 1872 Parks Regulation Act created positions of "park keeper" and also provided that "Every police constable belonging to the police force of the district in which any park, garden, or possession to which this Act applies is situate shall have the powers, privileges, and immunities of a park-keeper within such park, garden, or possession."[23] 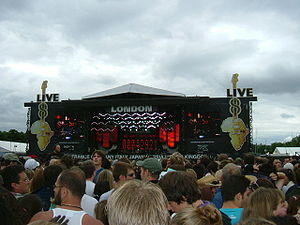 Hyde Park has been the venue for some famous rock concerts, including the major location for the Live 8 string of benefit concerts where Pink Floyd reunited their classic line up for the first time in over 30 years. Queen played here in one of their most popular shows, in 1976. It is estimated that 150–200 thousand people turned up for the event.[24] However, the record concert attendance is probably for the 1969 concert by the Rolling Stones. According to much of the press, the crowd then was estimated between 250,000 and 500,000.[25] Blur played here as part of their reunion. They have released two live albums recorded at the park called All the People: Blur Live at Hyde Park (2009) and Parklive (2012).

Local residents have become critical of Hyde Park as a concert venue, due to the sound levels, and have campaigned for a maximum sound level of 73 decibels.[26] In June 2012, Bruce Springsteen and Paul McCartney found their microphones switched off after Springsteen had played a three-hour set during the Park's Hard Rock Calling festival, and overshot the 10:30pm curfew time.[27]

In 2013, Hyde Park hosted "Barclaycard presents British Summer Time Hyde Park", the first of a five-year concert series developed with new promoters AEG Live who won the tender at the end of 2012. The following year, Canadian band Arcade Fire's set in Hyde Park was described as "the concert of the summer".[28]

Since 1996, the park has been the London venue for the Proms in the Park concerts, held on the last night of the BBC Proms.[29]

Pink performed at the park on 2 July 2010 during The Funhouse Summer Carnival. On 17 July 2012, Madonna performed in Hyde Park for her only London date during The MDNA Tour in front of nearly 55,000 people. The Rolling Stones performed two concerts at the park on 6 and 13 July 2013, as part of their 50 & Counting Tour.

For the 2012 Summer Olympics, the park hosted the triathlon, which brothers Alistair Brownlee and Jonathan Brownlee took the Gold and Bronze medals[30] for Team GB, and the 10 km open water swimming events.

There are five London Underground stations located on or near the edges of Hyde Park and Kensington Gardens (which is contiguous with Hyde Park). In clockwise order starting from the south-east, they are: