The Hymn to Liberty or Hymn to Freedom[1] (Greek: Ύμνος εις την Ελευθερίαν, Ýmnos is tin Eleftherían pronounced [ˈim.nos is tin elefˈθeri.an]) is a poem written by Dionýsios Solomós in 1823 that consists of 158 stanzas, which is used as the national anthem of Greece and Cyprus. It was set to music by Nikolaos Mantzaros, and is the longest national anthem in the world by length of text.[3] In 1865, the first three stanzas (and later the first two) officially became the national anthem of Greece and, from 1966, also that of the Republic of Cyprus.

Dionysios Solomos wrote the anthem in 1823 in Zakynthos and one year later was printed in Messolonghi. The hymn was set to music in 1865 by the Corfiot operatic composer Nikolaos Mantzaros, who composed two choral versions, a long one for the whole poem and a short one for the first two stanzas; the latter is the one adopted as the National Anthem of Greece. The Greek anthem was adopted as the anthem of the Republic of Cyprus by order of the Council of Ministers in 1966.[4] 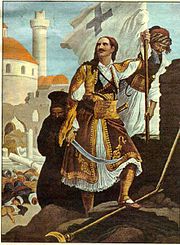 Inspired by the Greek War of Independence, Solomos wrote the hymn to honour the struggle of Greeks for independence after centuries of Ottoman rule.

The poet mentions the misery of the Greeks under the Ottomans and their hope for freedom. He describes different events of the War, such as the execution of Patriarch Gregory V of Constantinople, the reaction of the Great Powers, extensively the Siege of Tripolitsa and the Christian character of the struggle.

An adapted version was used during the short-lived Cretan State as the Cretan Anthem. The Hymn to Liberty has been the Greek Royal Anthem since 1864.

The Constitution of Cyprus (1960) does not proclaim a national anthem. The two communities later agreed, in official circumstances, that a piece of classical music should be played in lieu of the anthem.[citation needed] However, after rejecting the amended Constitution proposed by Makarios in 1963, the Turkish representation broke away from the government of the Republic of Cyprus; there followed a period of intercommunal violence. The Council of Ministers subsequently decided to adopt the Hymn to Liberty as the official anthem of Cyprus on 16 November 1966.[2]

This anthem has been performed at every closing ceremony of the Olympic Games, to pay tribute to Greece as the birthplace of the Olympic Games. The version commonly played by military bands was composed by Lieutenant Colonel Margaritis Kastellis (1907–1979), former director of the Greek Music Corps.[6]