Hyrum Smith (February 9, 1800 – June 27, 1844) was an American religious leader in the Church of Jesus Christ of Latter Day Saints, the original church of the Latter Day Saint movement. He was the older brother of the movement's founder, Joseph Smith.

Hyrum was born in Tunbridge, Vermont, the second son of Joseph Smith, Sr. and Lucy Mack Smith. Smith received a limited education, and established himself as a farmer.

Smith attended Dartmouth College in his teens. This may have been one of the factors behind Dr. Nathan Smith treating Smith's brother Joseph's leg.[2]

During the translation of the Book of Mormon and the establishment of the Church of Jesus Christ of Latter Day Saints, Smith was a close advisor and confidant to his brother Joseph. In June 1829, Smith was baptized in Seneca Lake, New York. He was one of the Eight Witnesses who examined and testified of the reality of the golden plates, the source of the Book of Mormon. When the Church of Christ[3] was organized on April 6, 1830, six men signed their names as charter members; at the age of thirty, Hyrum Smith was the oldest of the six. Smith served as presiding officer of a church branch in Colesville, New York and was one of the first Latter Day Saint missionaries in the surrounding area. 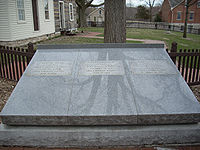 As the church headquarters and membership moved west, Smith and his family relocated. In 1831, he established a home in Kirtland, Ohio. During his residence there, he served as foreman of the quarry providing stone for the Kirtland Temple. Between 1831 and 1833, he served proselyting missions to Missouri and Ohio. In 1834, under the direction of Joseph Smith, he recruited members for a militia, Zion's Camp, and traveled with the group to the aid of the Latter Day Saints in Missouri. He was appointed Second Counselor in the church's First Presidency in November 1837. In 1838 and 1839, Hyrum, Joseph and three other church leaders shared a jail cell in Liberty, Missouri while awaiting trial.

After relocating to Nauvoo, Illinois, Smith became Presiding Patriarch of the Church, a position first held by his father, Joseph Smith, Sr. He also replaced Oliver Cowdery as Assistant President of the Church; in this capacity, Smith acted as President of the Church in Joseph's absence and was designated to be Joseph's successor if he were killed or incapacitated. Although Hyrum Smith was never explicitly ordained to the priesthood office of apostle, "his appointment as assistant president may have included such authority".[4]

When warned of possible danger, Joseph urged Smith and his family to flee to Cincinnati, Ohio. Smith refused and, in 1844, traveled with Joseph to Carthage, Illinois, where both were charged with riot and treason. Joseph, Hyrum, John Taylor and Willard Richards were held awaiting trial in a jail in Carthage. On June 27, 1844, the building was attacked by a mob of between sixty and two hundred men. While attempting to barricade the door to prevent the mob from entering, Smith was shot in the face and exclaimed, "I am a dead man," as he died.[5] Taylor was struck by several bullets but survived with the help of Richards. Joseph was hit by at least two shots, exclaimed "O Lord, My God,"[5] and fell through a second-story window to the ground where he was shot again.

Because of his position as Assistant President of the Church, it is likely that Smith would have succeeded Joseph and become the next president of the church had he outlived his brother. 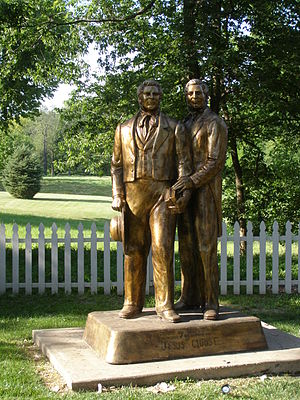 Statue of Joseph and Hyrum Smith in Nauvoo, Illinois

Smith's descendants have played significant roles in the history of The Church of Jesus Christ of Latter-day Saints (LDS Church). Joseph F. Smith, his son by Mary Fielding Smith, served as president of the LDS Church between 1901 and 1918. His grandson, Joseph Fielding Smith also served as president of the church between 1970 and 1972. His eldest son, John Smith, served as Presiding Patriarch of the church between 1855 and 1911, and John Smith's descendants held this post from 1912 to 1932 and from 1942 to 1979, when the office was effectively discontinued and the incumbent, Eldred G. Smith, was given the title patriarch emeritus. M. Russell Ballard, a current member of the Quorum of the Twelve Apostles of the LDS Church, is also a direct descendant of Smith.

In 1918, Smith's descendants erected a monument to him in the Salt Lake City Cemetery.