The IEEE P1905.1 working group had its first meeting in December 2010 to begin development of convergence digital home network specifications.[2] Around 30 organizations participated in the group and achieved approval of the draft P1905.1 standard in January 2013 with final approval and publication by IEEE-SA in April 2013.[3] 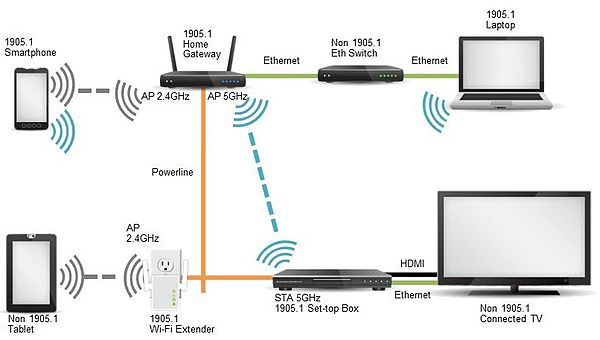 1905.1 home network (does not show AC powerline or MoCA connectivity)

nVoy [1] officially certifies products as 1905.1-compliant and is intended to become the dominant brand name and identity for all 1905.1 devices. Not to be confused with the Pogo device of the same name nor various networked devices named Envoy, e.g. from ASUS and others. Major chip vendors (notably Qualcomm [2] and Broadcom [3]) endorsed the certification regime. Consumer-level lists of features and benefits of IEEE 1905 are also the responsibility of nVoy certifiers. [4].

The benefits of 1905.1 technology include simple setup, configuration and operation of home networking devices using heterogeneous technologies. Leveraging the performance, coverage and mobility benefits of multiple interfaces (Ethernet, Wi-Fi, Powerline and MoCA) enables better coverage and throughput in every room for both mobile and fixed devices.

Standardizing the use of multiple networking technologies to transmit data to a single device in a transparent manner enables powerful use cases in home networks:

For service providers and carriers

Service providers seek to address growth in network traffic resulting from more devices in more rooms and high-bandwidth latency-straining trends such as IPTV, Video on demand, multi-room DVR and device to device media shifting. 1905.1 upgrades the network to a backbone to improve existing deployments (for instance, ending streaming delays from in-home devices) and enabling new whole-home products and services. Some example features/benefits include:

For consumers and retailers

Integration of wired and wireless products enables consumers to easily self-install networking equipment capable of significantly improving capacity and coverage in their home network which improves end user satisfaction and reduces product returns. Some specific benefits of 1905.1 networking to the retailer and end user include: 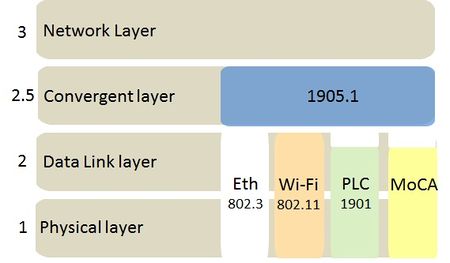 1905.1 devices run an abstraction layer (AL) hiding the diversity of media access control technologies. This sub-layer exchanges Control Message Data Unit (CMDU) with 1905.1 neighbors. The CMDUs are communicated directly over Layer 2 of the different supported technologies without the need to have an IP stack. The standard does not require any changes to the specifications of the underlying technologies.

This abstraction layer provides a unique EUI-48 address to identify a 1905.1 device. This unique address is useful to keep a persistent address when multiple interfaces are available and facilitate seamless switching of traffic between interfaces. The standard does not define loop prevention and forwarding protocol. A 1905.1 device is compatible with existing IEEE 802.1 bridging protocols.

The management of a 1905.1 device is simplified by the use of a unified Abstraction Layer Management Entity (ALME) and with the use of a data model accessible with CWMP (Broadband Forum TR-069) 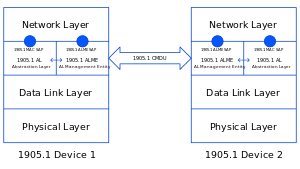 The architecture designed for the abstraction layer is based on two 1905.1 service access points accessible to upper layers: a 1905.1 MAC SAP and a 1905.1 ALME SAP.

The ALME is a unique management entity supporting different media dependent management entities and a flow-based forwarding table. A 1905.1 protocol is used between ALMEs to distribute different type of management information such as: topology and link metrics.

1905.1 Control Message Data Unit frame consists of an 8 octets header and a variable length list of TLVs (type-length-value) data elements which is easily extendable for future use. The generic CMDU frame format has the following structure

Vendor specific CMDU are supported via Message Type 0x0004. Each TLV has the following basic structure:

Vendor specific TLV are supported via TLV Type 11. The EtherType value assigned to 1905.1 CMDU is 0x893a.

1905.1 provides a tool to get a global view of the network topology regardless of the technologies running in the home/office network.

Topology information collected by a 1905.1 device are stored in a data model accessible remotely via TR-069 protocol.

The 1905.1 ALME provides a mechanism to obtain a list of metrics for links connecting two 1905.1 devices:

The 1905 ALME provides a list of primitives to manage forwarding rules per flow (Get, Set, Modify and Remove). This feature may be used to distribute dynamically the different flows over the different technologies. To classify the flows, a set or subset of the following elements can be used:

When setting a forwarding rule for a unicast destination, only one outgoing interface may be specified.

The Push Button method requires the user to press one button on a new (i.e. not in-network) 1905.1 device and one button on any 1905.1 device already in the network. It is not necessary for the user to know which technology is used by the new device to join the network, and which device will process the pairing and admission of this new device into the network. Two 1905.1 messages are used for the push button method:

These messages are sent to all 1905.1 devices in the network.

If the User Configured Passphrase/Key is used, the user needs to type/remember only one sequence of US-ASCII characters (between 8 and 63) and the ALME will derive different security passwords for the different technologies through SHA-256 function.

If the NFC network Key is used, the user needs to touch the new 1905.1 device with an NFC equipped smartphone already member of the 1905.1 network.

A specific 1905.1 CMDU frame (Message type 0x0009) is used to transport WPS messages. If an AP Enrollee is dual-band (2.4 GHz and 5Ghz) capable, the auto-configuration procedure may be executed twice.

The consumer certification program named nVoy was announced in June 2013 and first certified chips that " support the new nVoy HomePlug Certification for IEEE 1905.1 compliance" were announced at that time [5]. Consumer-level products were expected by year-end 2013.[11] but were delayed until 2014 consumer shows - as of December 2013 there were no nVoy-certified consumer products; small-network-focused review sites had no products to review. [6]