IEEE 802.11e-2005 or 802.11e is an approved amendment to the IEEE 802.11 standard that defines a set of quality of service (QoS) enhancements for wireless LAN applications through modifications to the Media Access Control (MAC) layer.[1] The standard is considered of critical importance for delay-sensitive applications, such as Voice over Wireless LAN and streaming multimedia. The amendment has been incorporated into the published IEEE 802.11-2007 standard.

802.11 is an IEEE standard that allows devices such as laptop computers or cellular phones to join a wireless LAN widely used in the home, office and some commercial establishments.

The original 802.11 MAC defines another coordination function called the point coordination function (PCF). This is available only in "infrastructure" mode, where stations are connected to the network through an Access Point (AP). This mode is optional, and only very few APs or Wi-Fi adapters actually implement it.[citation needed] APs send beacon frames at regular intervals (usually every 0.1 second). Between these beacon frames, PCF defines two periods: the Contention Free Period (CFP) and the Contention Period (CP). In the CP, DCF is used. In the CFP, the AP sends Contention-Free-Poll (CF-Poll) packets to each station, one at a time, to give them the right to send a packet. The AP is the coordinator. Although this allows for a better management of QoS, PCF does not define classes of traffic as is common with other QoS systems (e.g. 802.1p and DiffServ). 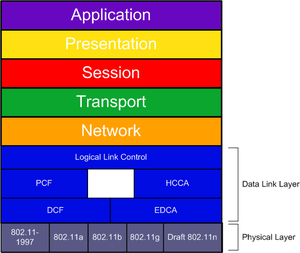 The 802.11e enhances the DCF and the PCF, through a new coordination function: the hybrid coordination function (HCF). Within the HCF, there are two methods of channel access, similar to those defined in the legacy 802.11 MAC: HCF Controlled Channel Access (HCCA) and Enhanced Distributed Channel Access (EDCA). Both EDCA and HCCA define Traffic Categories (TC). For example, emails could be assigned to a low priority class, and Voice over Wireless LAN (VoWLAN) could be assigned to a high priority class.

With EDCA, high-priority traffic has a higher chance of being sent than low-priority traffic: a station with high priority traffic waits a little less before it sends its packet, on average, than a station with low priority traffic. This is accomplished through the TCMA protocol, which is a variation of CSMA/CA using a shorter arbitration inter-frame space (AIFS) for higher priority packets.[3] The exact values depend on the physical layer that is used to transmit the data. In addition, EDCA provides contention-free access to the channel for a period called a Transmit Opportunity (TXOP). A TXOP is a bounded time interval during which a station can send as many frames as possible (as long as the duration of the transmissions does not extend beyond the maximum duration of the TXOP). If a frame is too large to be transmitted in a single TXOP, it should be fragmented into smaller frames. The use of TXOPs reduces the problem of low rate stations gaining an inordinate amount of channel time in the legacy 802.11 DCF MAC. A TXOP time interval of 0 means it is limited to a single MAC service data unit (MSDU) or MAC management protocol data unit (MMPDU).

The levels of priority in EDCA are called access categories (ACs). The contention window (CW) can be set according to the traffic expected in each access category, with a wider window needed for categories with heavier traffic. The CWmin and CWmax values are calculated from aCWmin and aCWmax values, respectively, that are defined for each physical layer supported by 802.11e.

Wi-Fi Multimedia (WMM) is the Wi-Fi Alliance specification which is a subset of IEEE 802.11e. Certified APs must be enabled for EDCA and TXOP. All other enhancements of 802.11e are optional.

The HCF (hybrid coordination function) controlled channel access (HCCA) works a lot like PCF. However, in contrast to PCF, in which the interval between two beacon frames is divided into two periods of CFP and CP, the HCCA allows for CFPs being initiated at almost anytime during a CP. This kind of CFP is called a Controlled Access Phase (CAP) in 802.11e. A CAP is initiated by the AP whenever it wants to send a frame to a station or receive a frame from a station in a contention-free manner. In fact, the CFP is a CAP too. During a CAP, the Hybrid Coordinator (HC)—which is also the AP—controls the access to the medium. During the CP, all stations function in EDCA. The other difference with the PCF is that Traffic Class (TC) and Traffic Streams (TS) are defined. This means that the HC is not limited to per-station queuing and can provide a kind of per-session service. Also, the HC can coordinate these streams or sessions in any fashion it chooses (not just round-robin). Moreover, the stations give info about the lengths of their queues for each Traffic Class (TC). The HC can use this info to give priority to one station over another, or better adjust its scheduling mechanism. Another difference is that stations are given a TXOP: they may send multiple packets in a row, for a given time period selected by the HC. During the CFP, the HC allows stations to send data by sending CF-Poll frames.

HCCA is generally considered the most advanced (and complex) coordination function. With the HCCA, QoS can be configured with great precision. QoS-enabled stations have the ability to request specific transmission parameters (data rate, jitter, etc.) which should allow advanced applications like VoIP and video streaming to work more effectively on a Wi-Fi network.

HCCA support is not mandatory for 802.11e APs. In fact, few (if any) APs currently available are enabled for HCCA.[citation needed] Implementing the HCCA on end stations uses the existing DCF mechanism for channel access (no change to DCF or EDCA operation is needed). Stations only need to be able to respond to poll messages. On the AP side, a scheduler and queuing mechanism is needed.

In addition to the Power Save Polling mechanism, which was available pre-802.11e, new power save delivery and notification mechanisms have been introduced in 802.11e. APSD (automatic power save delivery) provides two ways to start delivery: ‘scheduled APSD’ (S-APSD) and ‘unscheduled APSD’ (U-APSD). With APSD, multiple frames may be transmitted together by the access point to a power-saving device during a service period. After the end of a service period, the device enters a doze state until next service period. With S-APSD, service periods start according to a predetermined schedule known to the power-saving device, thus allowing the Access Point to transmit its buffered traffic without the need for any signaling. With U-APSD, whenever a frame is sent to the Access Point, a service period is triggered, which allows the access point to send buffered frames in the other direction. U-APSD can take a ‘full’ U-APSD or ‘hybrid’ U-APSD form. With Full U-APSD, all types of frames use U-APSD independently of their priority. With Hybrid U-APSD, either U-APSD or the legacy Power Save Polling mechanism is used, depending on the access category. S-APSD is available for both channel access mechanisms, EDCA and HCCA, while U-APSD is available only for EDCA.[1][4]

APSD is a more efficient power management method than legacy 802.11 Power Save Polling, leading to lower power consumption, as it reduces both the signaling traffic that would otherwise be needed for delivery of buffered frames to power-saving devices by an AP and the collision rate among power-save polls, typically transmitted immediately after the beacon TIM. S-APSD is more efficient than U-APSD because scheduled service periods reduce contention and because transmission between the access point and a power-saving device starts without the need for any signaling. A power-saving device using U-APSD must generate signaling frames to retrieve buffered traffic in the absence of uplink traffic, as for instance in the case of audio, video, or best effort traffic applications found in today's smartphones. U-APSD is attractive for VoIP phones, as data rates are roughly the same in both directions, thus requiring no extra signaling—an uplink voice frame can trigger a service period for the transmission of a downlink voice frame.[5] Hybrid U-APSD is less efficient than Full U-APSD because the Power Save Polling mechanism it employs for some access categories is less efficient than APSD, as explained above. The relative advantages of the various power-save mechanisms have been confirmed independently by simulations.[6][7]

Block acknowledgments allow an entire TXOP to be acknowledged in a single frame. This will provide less protocol overhead when longer TXOPs are specified.

In QoS mode, service class for frames to send can have two values: QosAck and QosNoAck. Frames with QosNoAck are not acknowledged. This avoids retransmission of highly time-critical data.

Direct link setup allows direct station-to-station frame transfer within a basic service set. This is designed for consumer use, where station-to-station transfer is more commonly used. Enhancements to Direct Link Setup were published as 802.11z (TDLS), allowing the protocol to also work outside of infrastructure networks (when no AP is present.) TDLS provides an alternative to Wi-Fi Direct, while DLS provides an avenue for devices to perform consumer station-to-station functions while simultaneously connected to an enterprise WLAN, though this has yet to be seized upon by major media streaming device manufacturers. Microsoft's Virtual Wi-Fi initiative was designed to accomplish the same goal as DLS. Virtual Wi-Fi allows gamers to connect wireless while accessing the Internet through an AP by allowing station adapters to have multiple MAC addresses.[8]