IGATE is an IT services company, headquartered in Bridgewater, New Jersey. The firm operates in North America, Asia, Europe, Japan and Australia, providing technology consultancy and services. Its revenues in 2014 were over US$1.2 billion, and it has a workforce of over 31,000. The firm has over 70 offices and customer delivery centers in North America, Europe, Asia and Australia. On April 27, 2015 French IT services group Capgemini unveiled a deal to acquire IGATE in a $4bn deal.[4]

In 2011, IGATE, acquired Patni Computer Systems–a company three times its size at the time.[5] With a value of around a billion US dollars, this acquisition was the largest cross-border leveraged transaction in the IT sector.[citation needed] The acquisition was accomplished over 12 months, including the delisting of Patni from the Indian bourses and consolidating the shareholder value in the U.S.[citation needed] Initially. iGATE firm changed its name to iGATE Patni. It was changed to IGATE again on 7 May 2012. Its shares are listed on the NYSE as "IGATE". On 27 April 2015, Capgemini announced it would be acquiring IGATE, the transition would be completed over a phase of 6 months. IGATE CEO Ashok Vemuri announced his departure on 6 October 2015.[4] 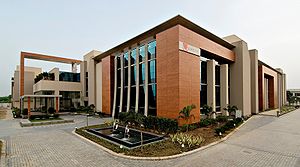 Situated on 50 acres (200,000 m2) of land in the Navi Mumbai area, this campus includes facilities for software development, training, customer care, and employee recreation. The IGATE (Patni) Knowledge Park accommodates 17,000 professionals.[6] The firmThe IGATE Knowledge Centre,[7] set up with an investment of Rs. 1.75 billion, complements the organization's green initiatives around efficient utilization and conservation of energy, water and natural resources. Developed on Green Architecture, the centre is spread over 5 acres (20,000 m2) and has a seating capacity of over 3500.

The facility was designed and constructed as per the guidelines of LEED (Leadership in Energy and Environmental Design) India Green Building Rating System for New Construction.[8]