Many of the character sets included as ISO/IEC 2022 encodings are 'double byte' encodings where two bytes correspond to a single character. This makes ISO-2022 a variable width encoding. But a specific implementation does not have to implement all of the standard; the conformance level and the supported character sets are defined by the implementation.

A second requirement of ISO-2022 was that it should be compatible with 7-bit communication channels. So even though ISO-2022 is an 8-bit character set any 8-bit sequence can be reencoded to use only 7-bits without loss and normally only a small increase in size.

To represent large character sets, ISO/IEC 2022 builds on ISO/IEC 646's property that one seven bit character will normally define 94 graphic (printable) characters (in addition to space and 33 control characters). Using two bytes, it is thus possible to represent up to 8836 (94×94) characters; and, using three bytes, up to 830584 (94×94×94) characters. Though the standard defines it, no registered character set uses three bytes (although EUC-TW's unregistered G2 is). For the two-byte character sets, the code point of each character is normally specified in so-called kuten (Japanese: 区点) form (sometimes called qūwèi (Chinese: 区位), especially when dealing with GB2312 and related standards), which specifies a zone (区, Japanese: ku, Chinese: qū), and the point (Japanese: 点 ten) or position (Chinese: 位 wèi) of that character within the zone.

The escape sequences therefore do not only declare which character set is being used, but also, by knowing the properties of these character sets, know whether a 94-, 96-, 8836-, or 830584-character (or some other sized) encoding is being dealt with.

Although ISO/IEC 2022 character sets using control sequences are still in common use, particularly ISO-2022-JP, most modern e-mail applications are converting to use the simpler Unicode transforms such as UTF-8. The encodings that don't use control sequences, such as the ISO-8859 sets are still very common.

ISO/IEC 2022 coding specifies a two-layer mapping between character codes and displayed characters. Escape sequences allow any of a large registry of graphic character sets to be "designated"[2] into one of four working sets, named G0 through G3, and shorter control sequences specify the working set that is "invoked"[3] to interpret bytes in the stream.

Encoding byte values ("bit combinations") are often given in column-line notation, where two decimal numbers in the range 00–15 (each corresponding to a single hexadecimal digit) are separated by a slash.[4] Hence also, codes 0x20 through 0x2F inclusive may be referred to as "column 02". This is the notation used in the ISO/IEC 2022 / ECMA-35 standard itself.[5] They may be described elsewhere using hexadecimal, as is often used in this article, or using the corresponding ASCII characters,[6] although the escape sequences are actually defined in terms of byte values, and the graphic assigned to that byte value may be altered without affecting the control sequence.

Byte values from the 7-bit ASCII graphic range (hexadecimal 0x20–0x7F), being on the left side of a character code table, are referred to as "GL" codes (with "GL" standing for "graphics left") while bytes from the "high ASCII" range (0xA0–0xFF), if available (i.e. in an 8-bit environment), are referred to as the "GR" codes ("graphics right").[7] The terms "CL" and "CR" are defined for the control ranges, but the CL range always invokes the primary (C0) controls, whereas the CR range always either invokes the secondary (C1) controls or is unused.[7]

Use of the backspace and carriage return in this manner is permitted by ISO/IEC 646 but prohibited by ISO/IEC 4873 / ECMA-43[13] and by ISO/IEC 8859,[14][15] on the basis that it leaves the graphical character repertoire undefined.[13] ISO/IEC 4873 / ECMA-43 does, however, permit the use of the GCC function on the basis that the sequence of characters is kept the same and merely displayed in one space, rather than being over-stamped to form a character with a different meaning.[13]

A C0 control set is invoked over the CL range 0x00 through 0x1F,[20] whereas a C1 control character may be invoked over the CR range 0x80 through 0x9F (in an 8-bit environment) or by using escape sequences (in a 7-bit or 8-bit environment),[16] but not both. Which style of C1 invocation is used must be specified in the definition of the code version.[21] For example, ISO/IEC 4873 specifies CR bytes for the C1 controls (SS2 and SS3) which it uses.[13]

Since SI (LS0) and SO (LS1) are C0 controls and SS2 and SS3 are C1 controls, they must be present in the respective sets if their functionality is used.[20][21] The C1 controls themselves, as mentioned above, may be represented using escape sequences or 8-bit bytes, but not both.

Escape sequences to designate character sets take the form ESC I [I...] F, where there are one or more intermediate bytes[32] (I) from the range 0x20–0x2F, and a final byte[33] (F) from the range 0x30–0x7F.[34] However, the range 0x30–0x3F is reserved for private-use F bytes for unregistered uses defined by prior agreement between parties,[35] which might be defined by further protocols such as ARIB STD-B24.

The I bytes identify the type of character set and the working set it is to be designated to, while the F byte identifies the character set itself. Additional I bytes may be added before the F byte to extend the F byte range. This is currently only used with 94-character sets, where codes of the form ESC ( ! F have been assigned. At the other extreme, no multibyte 96-sets have been registered, so the sequences below are strictly theoretical.

There are also three special cases for multi-byte codes. The code sequences ESC $ @, ESC $ A, and ESC $ B were all registered when the contemporary version of the standard allowed multi-byte sets only in G0, so must be accepted as synonyms for the sequences ESC $ ( @ through ESC $ ( B to designate to the G0 character set.[36] 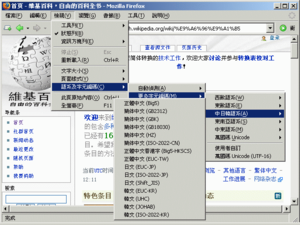 Various ISO 2022 and other CJK encodings supported by Mozilla Firefox as of 2004. (This support has been reduced in later versions to avoid certain cross site scripting attacks.)

ISO-2022-JP is a widely used encoding for Japanese, in particular in e-mail. It is codified in IETF RFC 1468, dated 1993.[46] It has an advantage over other encodings for Japanese in that it does not require 8-bit clean transmission. Microsoft calls it Code page 50220.[47] It starts in ASCII and includes the following escape sequences:

The JIS X 0213 standard, first published in 2000, defines an updated version of ISO-2022-JP, without the ISO-2022-JP-2 extensions, named ISO-2022-JP-3. The additions made by JIS X 0213 compared to the base JIS X 0208 standard resulted in a new registration being made for the extended JIS plane 1, while the new plane 2 received its own registration. The further additions to plane 1 in the 2004 edition of the standard resulted in an additional registration being added to a further revision of the profile, dubbed ISO-2022-JP-2004. In addition to the basic ISO-2022-JP designation codes, the following designations are recognised:

The basic ISO-2022-CN profile includes GB 2312 and the first two planes of CNS 11643 (due to these two planes being sufficient to represent all traditional Chinese characters from common Big5, to which the RFC provides a correspondence in an appendix):[56]

The ISO-2022-CN-EXT profile permits the following additional sets and planes.[56]

The ISO-2022-CN-EXT profile further lists additional Guobiao standard graphical sets as being permitted, but conditional on their being assigned registered ISO 2022 escape sequences:[56]

ISO-2022-KR and ISO-2022-CN are used less frequently than ISO-2022-JP, and are sometimes deliberately not supported due to security concerns. Notably, the WHATWG Encoding Standard used by HTML5 maps ISO-2022-KR, ISO-2022-CN and ISO-2022-CN-EXT (as well as HZ-GB-2312) to the "replacement" decoder,[57] which maps all input to the replacement character (�), in order to prevent certain cross-site scripting and related attacks, which utilise a difference in encoding support between the client and server.[58] Although the same security concern (allowing sequences of ASCII bytes to be interpreted differently) also applies to ISO-2022-JP and UTF-16, they could not be given this treatment due to being much more frequently used in deployed content.[59]

Earlier editions of the standard permitted non-ASCII assignments in the G0 set, provided that the ISO 646 invariant positions were preserved, that the other positions were assigned to spacing (not combining) characters, that 0x23 was assigned to either £ or #, and that 0x24 was assigned to either $ or ¤.[61] For instance, the 8-bit encoding of JIS X 0201 is compliant with earlier editions. This was subsequently changed to fully specify the ISO 646:1991 IRV / ISO-IR No. 6 set (ASCII).[13]

In cases where duplicate characters are available in different sets, the current edition of ISO/IEC 4873 / ECMA-43 only permits using these characters in the lowest numbered set which they appear in, although use in other sets is noted as having been permitted in earlier editions.[13] Use of multiple ISO/IEC 8859 parts together in ISO 2022 is prohibited by the ISO/IEC 8859 standard, which stipulates that equivalent character sets from ISO/IEC 10367 should be used at levels 2 and 3 instead.[14][15]

Character set designation escape sequences are used for identifying or switching between versions during information interchange only if required by a further protocol, in which case the standard requires an "announcer" sequence specifying the level, followed by a complete set of escapes specifying the character set designations for C0, C1, G0, G1, G2 and G3 respectively (but omitting G2 and G3 designations for level 1), with an F-byte of 0x7E denoting an empty set. Announcer sequences are as follows:[13]

Extended Unix Code (EUC) is a 8-bit variable-width character encoding system used primarily for Japanese, Korean, and simplified Chinese. It is based on ISO 2022, and only character sets which conform to the ISO 2022 structure can have EUC forms. Up to four coded character sets can be represented (in G0, G1, G2 and G3). The G0 set is invoked over GL, the G1 set is invoked over GR, and the G2 and G3 sets are (if present) invoked using the single shifts SS2 and SS3, which are used over GR (not GL). Other shift codes are not used.

Typically, G0 is used for an ISO-646 compliant single-byte coded character set such as ASCII, whereas G1 is used for a 94x94 coded character set represented in two bytes. The EUC-CN form of GB2312 and EUC-KR are examples of such two-byte EUC codes. EUC-JP includes characters represented by up to three bytes (i.e. SS3 plus two bytes) whereas a single character in EUC-TW can take up to four bytes (i.e. SS2 plus three bytes). Sometimes, ISO 646:KR (KS X 1003) or ISO 646:JP (the lower half of JIS X 0201) are used instead of ASCII for G0, meaning that 0x5C (backslash in US-ASCII) is often used to represent a Yen sign in EUC-JP and a Won sign in EUC-KR.

Comparison with other encodings