From Infogalactic: the planetary knowledge core
(Redirected from ISO 10487)
Jump to: navigation, search

Several types of connectors for car audio systems are used. 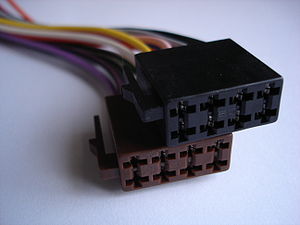 ISO 10487 defines a standard for connectors for the head unit to the car's electrical system, consisting of a system of four different connectors typically used in head units for car audio. 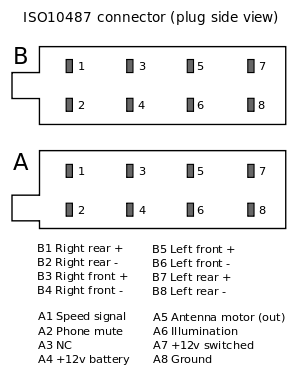 ISO 10487 connector pinout (plug side of male, wiring side of female)

Part 1 of the standard is dedicated to "Dimensions and general requirements" and Part 2 to "Performance requirements".

The first connector A is always present, is usually black in colour, and contains pins for power-supply, off/on (typically controlled by ignition key), optional control for a motorised antenna and so on.

The second connector B is for connecting four loudspeakers, front, rear, left and right, and is usually brown in colour.

The connector C is optional. Some times, it appears as one 20-pin connector, often red in colour, or it may be divided into three separate connectors which may be hooked together, in which case C1 is usually yellow, C2 is usually green which C3 is usually blue in colour. The contact spacing is narrower than the other connectors, so the C connector is sometimes referred to as mini-ISO.

Note: ISO 10487 only defines the physical attributes of the connectors, not the pin/signal designations, which are manufacturer-defined. The example above is oriented towards VW vehicles only.

The connector D is for satellite navigation systems. It has 10 pins.

From 2000 and onwards, manufacturers, such as BMW, Citroen, Ford, Mercedes Benz, Peugeot, Volkswagen, Rover, Audi, Seat, Opel and Škoda have sometimes started using a 40 pin connector instead, called the Quadlock (or Fakra, after the manufacturer). The Quadlock connector consists of a block of 16 flat pins analogous to the two main ISO 10487 connectors. While the physical contact pins are the same, the pin allocation is not entirely the same, and the connector housing is not compatible. In addition to the 16 pins, like ISO 10487, there are minor connectors for optional equipment. They fit within the frame of the main connector, and has coding so that they cannot be interchanged. Minor connector B has 12 pins for audio output signals. Minor connector C has 12 pins for various audio sources such as CD-changers, MP3 players.